By the BF Staff
From the September/October 2019 Issue

Most people know Mississippi for its music, its food and its Southern hospitality, but the state also is home to burgeoning industries that add millions of dollars to the economy and employ thousands of people. 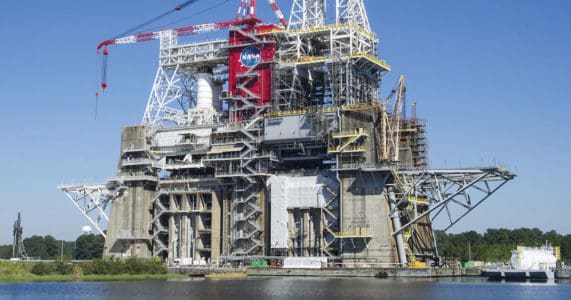 It takes nearly five hours to drive the 325 miles from Hancock County, MS, on the state’s coast, to Blue Springs, MS, near the Tennessee line. Between those two places are aerospace and automotive companies known all over the world– industries that call Mississippi home.

Mississippi’s strong business climate has attracted companies that build everything from cars to rockets, as well as all the parts that go with them.

These are only a few of the reasons aerospace and automotive companies decided to locate in the Magnolia State.

Every commercial airplane in the world has at least one component made in Mississippi. The state also is home to the nation’s largest rocket engine test complex: NASA’s Stennis Space Center in Hancock County.

Some of the world’s most renowned names in aerospace have a Mississippi location: GE Aviation, Airbus Helicopters, Rolls-Royce, Lockheed Martin and Relativity Space, just to name a few. All of these companies rely on the state’s skilled and productive workforce and comprehensive workforce training, supportive business environment, strategic location, low startup and operations costs and cutting-edge research and development.

One example is SpaceX, a commercial spaceflight company that began its rocket engine testing program at Stennis Space Center. The SpaceX Raptor engine development program is the latest in propulsion technology and produces the largest methane/LOX engines in U.S. history.

SpaceX upgraded the E-2 test stand at Stennis, which is now one of the most sophisticated high-pressure testing facilities in the world. This stand will remain the property of Stennis Space Center for future government and commercial use.

Mississippi has a wealth of expertise in UAS research, development and testing. For example, Camp Shelby, a state-owned military facility, currently is working with public and private customers to provide UAS testing opportunities.

Mississippi’s universities and community colleges also are involved with aerospace companies. Raspet Flight Research Laboratory at Mississippi State University is the public sponsor of a Certificate of Authorization for flight testing of the Heron, a Stark Aerospace UAS. Raspet often locates research staff on site to support engineering, design and flight testing of large-scale UAS. In 2015, the Federal Aviation Administration designated MSU as home of the Center of Excellence for Unmanned Aircraft Systems, an MSU-led coalition of dozens of world-renowned universities and more than 100 government and industry partners working together to safely integrate UAS into the national airspace.

Currently, there are nine models of vehicles manufactured in Mississippi, with more than 500,000 vehicles produced in the state each year. Mississippi also has more than 200 automotive suppliers employing more than 20,000 skilled workers.

The state has two automobile manufacturers: Nissan and Toyota. Nissan opened its plant in Canton, MS, in 2003 and has produced more than 4,000,000 vehicles. Toyota is celebrating its 12th year in Blue Springs. The plant has 2,000 employees who assemble the best-selling Corolla.

In addition to car manufacturers, Mississippi has a number of companies that produce tires, as well as automotive parts. Some of these include Continental Tire, which will start production in Hinds County in late 2019, Yokohama Tire and Cooper Tire & Rubber.

Continental, the fourth largest tire manufacturer, broke ground 10 months after announcing it was locating in Hinds County. The plant reflects an investment of $1.45 billion and is creating 2,500 new jobs.

Early in 2018, Cooper Tire & Rubber Company announced plans to locate its largest distribution center in Marshall County. The company is investing $50.5 million in the state and creating approximately 100 jobs.

Three of Mississippi’s research universities also play a vital role in economic and workforce development in the automotive industry. MSU houses the Center for Advanced Vehicular Systems, while the Center for Manufacturing Excellence at the University of Mississippi provides students with everything needed to compete in the world of modern manufacturing. The Mississippi Polymer Institute at the University of Southern Mississippi is a national leader in the study of composites, advanced materials, polymers and plastics.

Mississippi has an ideal environment for corporate growth and for companies in all industries, including a strong incentives portfolio. During the 2019 legislative session, the Mississippi Legislature passed several bills designed to further spur economic growth. Legislators reduced the amount of capital investment and minimum number of jobs required for aerospace companies and data centers, both of which have a strong presence in Mississippi, to qualify for incentives. Additionally, MDA is authorized to issue $3 million in bonds for site development improvements.

To join the growing list of industry leaders calling Mississippi home, visit Mississippi.org or call the Locate Mississippi team at (800) 360-3323.