By Jack Rogers
From the September/October 2019 Issue

Logistics is our cover story topic for this issue, so we had shipping containers, ports and channel depths on our mind when we had an opportunity to chat with Gov. Phil Bryant of Mississippi for BF’s exclusive Governor’s Report interview. That would be channel depths of at least 45 feet—the clearance required for one of the huge new post-Panamax container vessels to enter the harbor after a trip through the expanded Panama Canal. 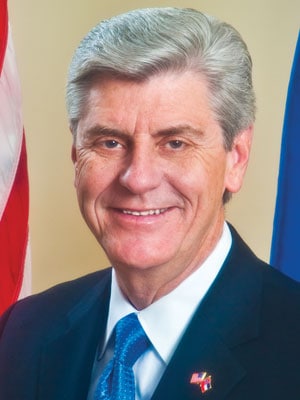 “As the Port’s business portfolio continues to grow, it is necessary to evaluate future expansion options that will allow for greater throughput,” Bryant told BF.“Currently, the Port is pursuing the necessary approvals to deepen the channel from its authorized depth of 36 feet to as much as 47 feet to allow for larger vessels to enter Gulfport. The process to expand the port’s channel is a multi-year effort that includes congressional, regulatory and federal agency approvals to move forward.” 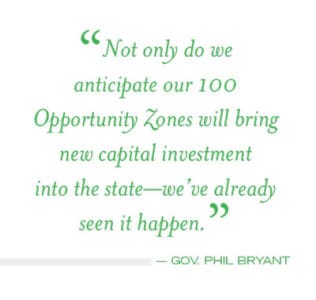 Since the early 1960s, Bryant explained, the Port of Gulfport has been a key gateway for goods coming from Central America due to its central location on the Gulf of Mexico. Currently, the port is the second largest import facility for fresh fruit in the U.S. (second only to Wilmington, DE). “With the completion of the $570 million Restoration Project, which allowed the port to double in size and included the construction of new terminal facilities, the Port of Gulfport is more than prepared to accommodate goods from Central and South America,” the governor said.

The Gulfport restoration is just one element in an impressive array of logistics assets in Mississippi that ship tons of goods by rail, road, air and water, including barges on the Mississippi River and a rapidly growing intermodal transportation network; Bryant credited the latter with playing a key role in cementing the Magnolia State’s leadership position in logistics.

“Our intermodal transportation network is a tremendous asset to our state and the companies that call Mississippi home, and it has certainly earned our state its status as a leading logistics hub,” Bryant said.

He added, “Mississippi’s prime location in the Southeast, combined with our robust transportation network, is often cited as a reason companies choose to locate in our state—particularly those with distribution and shipping needs. Mississippi provides easy access to major U.S. markets, and our transportation infrastructure allows for exceptional distribution and delivery for manufacturers. Mississippi boasts seven interstate highways, dozens of rail car providers and 15 ports along the Mississippi River, Tennessee-Tombigbee Waterway and Gulf of Mexico, two of which are deepwater ports.”

Mississippi is the only state with both Nissan and Toyota manufacturing plants. The success (and repeated expansions) of these plants has thrust the Magnolia State into the top ranks of automotive manufacturing states.

Gov. Bryant told BF that having two of the leading Japanese auto giants put down roots in Mississippi has served as a magnet that MS has used to draw in other major automotive players.

“The world took notice of Mississippi when Nissan opened in our state and once again when Toyota opened. Now we are home to Japan’s Yokohama Tire, Germany-based Continental Tire, which currently is building a $1.45-billion plant in central Mississippi and creating 2,500 jobs, and hundreds of automotive suppliers,” Bryant said.

“Nissan and Toyota have certainly played important roles in these companies’ decisions to locate in Mississippi,” he added, noting that the success of these pioneering transplants also cemented Mississippi’s reputation for having a skilled and highly productive automotive workforce.

Gov. Bryant is doing his part to increase Mississippi’s share of incoming FDI (while also boosting its exports) on numerous foreign trade missions.

“Through proactive initiatives, such as regular business development missions to countries around the world, Mississippi works hard to increase trade in order to generate new investment and create jobs for our citizens,” Bryant said. “In 2018, trade increased nearly 6 percent over 2017, with Mississippi companies exporting $11.63 billion in goods and services to 178 countries.”

A traditional industry for more than a century in Mississippi—shipbuilding continues to generate robust growth for the state. The U.S. Coast Guard recently decided to build its next-generation icebreaker at the VT Halter Marine shipbuilding facility in Pascagoula, a $745 million contract. Bryant cited several factors that made Mississippi the winner of this coveted project, which is expected to create 900 jobs.

“Shipbuilding is a major economic driver along the Mississippi Gulf Coast, with some of the most advanced ships in the world built there. The selection process for the U.S. Coast Guard’s new Polar Security Cutter was highly competitive, and several factors played into the contract being awarded to VT Halter Marine of Pascagoula—one of the best shipbuilders in the world,” Bryant said. “The area’s workforce, which is committed to producing quality ships for our nation’s military, is one of the region’s greatest assets, and [it] played a role in VT Halter winning this contract.”

He added, “the company’s leadership also is committed to delivering ships on time and on budget, and their business knowledge and drive to succeed in the industry demonstrates [they] can compete successfully for business. It also demonstrates Mississippi is a great place to do business. These factors were important in Mississippi and VT Halter Marine being selected for this coveted contract.”

Mississippi also has a long history of being a leader in the aerospace sector. In July, NASA gave the green light to the Stennis Space Center in Hancock County for core stage testing of the new Space Launch System (SLS) rocket, which will usher in a new era of exploration into deep space. During Gov. Bryant’s tenure, MS also has surged into a leadership position in the emerging growth sector of unmanned aerial systems (UAS).

We asked the governor what role the state’s higher education resources have been playing in the effort to rise above the competition in the unfolding Drone Age.

“Mississippi’s universities and community colleges are leading the charge in the areas of UAS research, development and testing,” Bryant told BF. “Mississippi State University’s Raspet Flight Laboratory is the public sponsor of the Certificate of Authorization for flight testing of Stark Aerospace’s Heron UAS. Raspet regularly has staff on site to support engineering, design and flight testing of large-scale UAS. MSU also is home of the Federal Aviation Administration’s Center of Excellence for Unmanned Aircraft Systems. The FAA designated MSU to lead a coalition of dozens of world-renowned universities and more than 100 government and industry partners who collaborate to safely integrate UAS into the national airspace.”

Bryant described how Mississippi is focusing like a laser on the expansion of its already-impressive skilled workforce with data-driven customized workforce training programs and initiatives to increase the number of STEM-skilled graduates in the state.

“Mississippi offers customized workforce training programs at community colleges as custom career and technical programs designed specifically to meet the job demands in Mississippi,” the governor explained. “Mississippi uses the State Longitudinal Data System of which state agencies and education entities are data contributors. This allows the data to be connected in such a way that makes it possible to determine outcomes such as wage gains, employment, job demands, the number of individuals who have specific education and skillsets by location and more. This is important because it allows us to determine what careers are in demand at any given point in time here in Mississippi and in response, design specialized/custom education and training programs to quickly prepare people with the skills and certifications that are in demand.”

Mississippi carefully evaluates trends in changing technology at Mississippi companies and at a national level to ensure training programs remain relevant, Bryant said. “I am dedicated to ensuring Mississippi’s training programs culminate into work opportunities. Through apprenticeship opportunities across the state, coupled with exposure to STEM at the high school level and specialized programs at the community college, Mississippi has been able to develop a workforce pipeline for business and industry,” he said.

QOZS ARE PULLING IN CAPITAL IN MS

The U.S. Treasury has designated 100 Opportunity Zones in Mississippi. When we asked Gov. Bryant whether he anticipates that the federal tax credits offered by these zones will attract new capital investment to the Magnolia State there was no guessing in his answer:

“Not only do we anticipate our 100 Opportunity Zones to bring new capital investment and jobs into the state—we’ve already seen it happen,” Bryant told us. “Vicksburg Forest Products was among the first in the nation to utilize the Opportunity Zone program when they purchased the Anderson-Tully Sawmill in May of 2018, saving 125 jobs in the process.”