A growing number of states are showing leadership on clean energy by adopting ambitious goals and energy-saving rules for buildings, appliances, and vehicles, according to the 2019 State Energy Efficiency Scorecard, just released by the nonprofit American Council for an Energy-Efficient Economy (ACEEE). This 13th annual report identifies the leaders – Massachusetts and California; the most-improved states, notably Maryland; the states that lost ground such as Kentucky; and those lagging behind, including North Dakota and Wyoming.

The 50-state Scorecard reveals increasing state commitment to energy efficiency, the least-expensive clean energy resource, even in places where it had traditionally been overlooked. Nevada, New Mexico, Washington, New York, and Maine passed 100% clean energy goals, along with plans to increase efficiency investment. A record number of states adopted new efficiency standards for a variety of products and equipment, some in direct response to the federal rollback of standards for light bulbs. States have also countered the federal plan to weaken vehicle efficiency by promoting electric vehicles and adopting California’s vehicle emissions standards, which now face a precarious future. 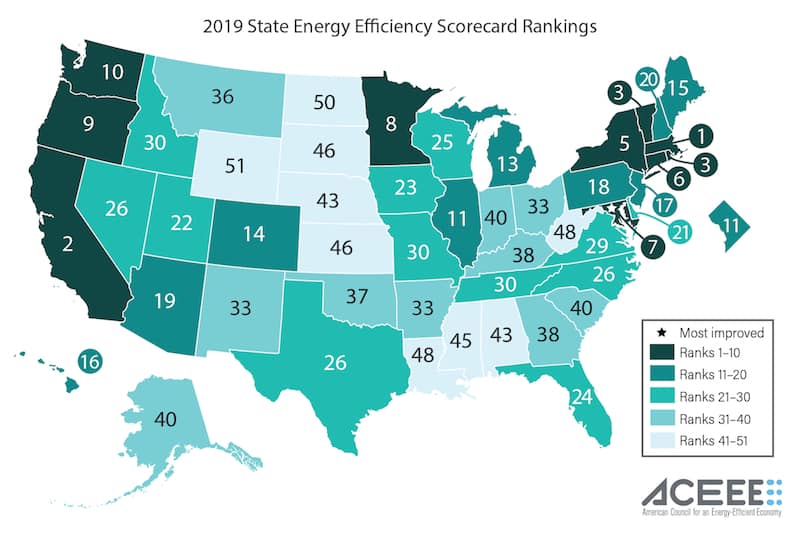 “State leadership on energy efficiency is more important than ever for ushering in the low-carbon future we need,” said ACEEE executive director Steve Nadel. “If states embrace robust energy-saving measures nationwide, Americans can slash greenhouse gas emissions by 50% and deliver more than $700 billion in energy savings by 2050. We commend the top states for their clean energy leadership and urge states that are lagging to implement the strategies laid out in this report so they can deliver energy and cost savings for their residents.”

The scorecard, which ranks states on 33 metrics in six policy areas, found that some states are moving backward but most are stepping forward: