The U.S. Environmental Protection Agency (EPA) is commemorating the 20th anniversary of the Superfund Redevelopment Initiative (SRI), launched in 1999 with the goal of returning formerly contaminated lands to long-term sustainable and productive reuse for communities across the country. Returning Superfund sites back to productive use has resulted in dramatic changes in communities by improving the quality of life, raising property values, and providing needed services to communities. 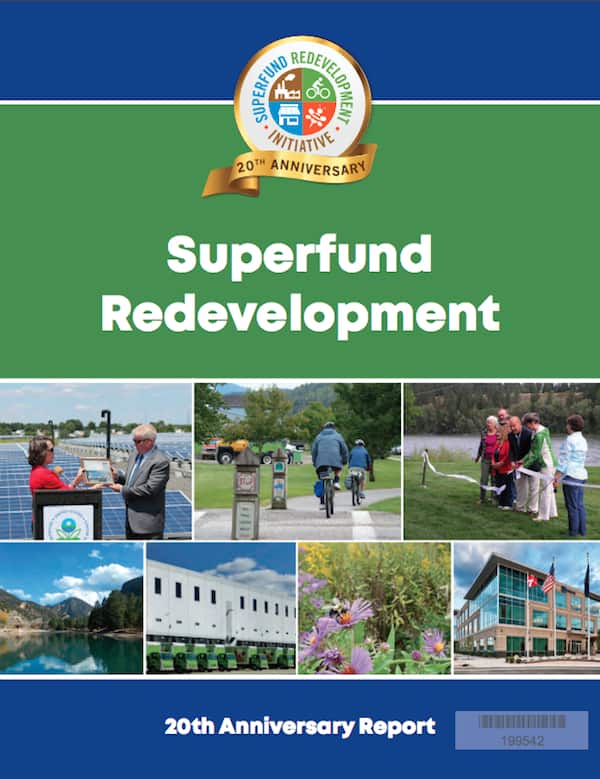 “Over the past 20 years, the Superfund Redevelopment Initiative has proven that incorporating reuse early in the process removes barriers to redevelopment and ensures that cleanup plans promote future economic and recreational opportunities,” said EPA Administrator Andrew Wheeler. “Thanks to SRI, hundreds of formerly contaminated sites have been transformed into hubs of economic, recreational, or residential activity. Promoting redevelopment and community revitalization is a top priority of this Administration and one of the key goals of the Agency’s Superfund Task Force.”

“Superfund cleanups can result in converting a once environmentally compromised site into an economic and community asset,” said EPA Regional Administrator Pete Lopez. “EPA is collaborating with public and private, local, state and federal partners to transform once blighted landscapes into viable and productive properties. We are taking action across our region to work with communities and other stakeholders to consider integrating reuse options into the cleanup process.”

Depending on site conditions and community preferences, sites can be reused for a multitude of purposes, including commercial, recreational, ecological and residential uses. The Redevelopment Initiative has helped communities turn former lumberyards into parks, landfills into solar farms, former smelters into health clinics and gravel pits into baseball fields. EPA provides communities with points of contact, as well as case studies and best practices to help bring these projects to fruition.

Examples of how Superfund redevelopment has transformed communities include:

Jersey City, NJ: The 87-acre PJP Landfill site is where the PJP Landfill Company accepted chemical and industrial waste from 1970 to 1974. Although the landfill closed in 1974, allegations of illegal dumping continued until 1984 and there were frequent smoky fires. In 1982, EPA added the site to the National Priorities List. By 1986, the New Jersey Department of Environmental Protection (NJDEP) extinguished the subsurface fires and capped the 45-acre area among other cleanup activities. In September 1995, EPA and NJDEP (the lead agency for this Site), announced a remedy at the site. The remedy included additional excavations, installation of drainage ditches and gas venting systems, wetlands assessment and restoration, and a cap over the entire Site. In 2008, AMB Corporation, which merged with Prologis in 2011, purchased about 52 acres of the site and agreed to clean up their portion of the site. Prologis incorporated the remedial cap into the construction of a warehouse and transfer station and parking lots. Construction was completed in May 2016 and the facility is fully occupied by two businesses. The portion of the company’s property along the Hackensack River has been made into a public walkway. In January 2012, Waste Management completed construction of a landfill cap on the remaining 32 acres of the site. Jersey City took control of the property in June 2012 and plans to develop a park and nature center there in the future.

Smelterville, ID: The Bunker Hill Mining & Metallurgical Complex in Smelterville, Idaho, is in one of the world’s largest historical mining districts. When the Bunker Hill lead smelter and several associated mines closed in the 1980s, the local economy nearly collapsed. EPA’s cleanup work has included removal of lead-contaminated soil and containment of mine tailings. This work paved the way for extensive reuse that includes a resort, residential and commercial development, a golf course, a ski area, and trails.

Collinsville, OK: Following cleanup of the Tulsa Fuel and Manufacturing site, a former zinc smelter in Collinsville, OK, a honey production company has expanded its operations onto part of the site. The area is now home to six honeybee hives, with 16 hives planned for the near future. Clover planted during site restoration makes an ideal habitat for bees. Cleanup resulted in the transformation of this once-contaminated smelter property into restored ecological habitat, one well-suited to supporting the protection of bees and production of high-quality honey.

Midvale City, UT: In Midvale City, Utah, lead and copper smelters contaminated soil and groundwater with heavy metals. EPA worked with stakeholders to link the Midvale Slag site’s cleanup with redevelopment goals. Cleanup is now complete, and the site is home to a thriving mixed-use development that supports thousands of jobs. Businesses on site include an international engineering company, a healthcare services company, an e-commerce company and many retail businesses. The site is also home to more than 1,000 residences, a light rail station, a riverwalk and a park.

Wobern, MA: Poor industrial practices led to the contamination of soil and groundwater at the Wells G&H site in Woburn, MA. Cleanup included removing and treating contaminated debris, soil and groundwater. Through a planning process funded through the Superfund program, the community worked with EPA to explore options for the site and develop a comprehensive reuse plan. Today, the site hosts an ice-skating rink, retail businesses, restaurants, hotels, and a natural area with hiking trails and recreation amenities.

Superfund redevelopment can also lead to energy independence. Today, 59 Superfund sites are home to alternative energy facilities. As of September 2018, these facilities provided enough energy to power about 95,000 homes. Wind, solar and landfill gas facilities make up about 92 percent of these projects. For example, a 7-megawatt solar farm at the Brick Township Landfill site in New Jersey powers all municipal buildings and community park facilities in the township. A solar array at the Continental Steel site in Kokomo, IN, provides enough energy to power 1,000 homes.

Over the last few years, as part of the Superfund Task Force work, EPA developed a nationwide list of Superfund National Priorities List sites with the greatest expected redevelopment potential. The list helps promote a renewed focus on accelerating work and progress at all Superfund sites while working to successfully return sites to productive use after cleanup is completed.