he business advantages of a Nevada location are well-recognized: A business-friendly regulatory and tax environment, superlative access to major Western markets, a hard-working, right-to-work labor force.

Henderson supercharges those advantages, creating opportunities for companies large and small to build successful operations in the flourishing southeast quadrant of the Las Vegas metropolitan area.

It’s an opportunity that’s been recognized by the Raiders franchise of the National Football League (NFL), who are locating their new headquarters and training facility in Henderson. The Golden Knights, the Las Vegas National Hockey League (NHL) franchise, will be joining the City’s downtown district with a new ice rink complex.

With a population of more than 300,000, Henderson is the size of Pittsburgh or St. Paul, MN, and it’s the second-largest city in Nevada. The city’s population represents a well-trained workforce. Henderson schools boast the highest graduation rate of any in the Las Vegas region. The nearby campus of University of Nevada Las Vegas (UNLV) with its 30,000 students and very-high research status graduate a stream of exceptionally skilled workers infused with the Nevada work ethic.

Businesses in Henderson draw workers from throughout the Las Vegas Valley. About 1 million workers live within a 50-minute commute.

The location of Henderson provides another powerful draw for business relocations and startups. Major Western markets — including Los Angeles and Phoenix — can be reached by trucks in five hours or less, and e-commerce providers turn to facilities in Henderson to provide last-minute service to the 2.2 million consumers throughout Southern Nevada.

Add McCarran International Airport — among the 10 busiest in the United States — and a robust highway network to the mix, and it’s little wonder that Henderson has seen strong growth in the logistics and manufacturing sectors.

Affordable business costs play a key role in Henderson’s success. It’s been recognized as a “very low-cost city” for business by the respected Kosmont-Rose Cost of Doing Business Survey, which looks at everything from the cost of business licenses to property tax rates.

Business across Henderson, recognize the value of the global exposure of a location in Southern Nevada. Millions of leisure visitors, not to mention hundreds of trade shows and professional meetings, provide myriad opportunities to easily build business networks that extend around the world.

But life isn’t all work.

Community leaders in Henderson have set laser focus on creation of a welcoming, attractive and vibrant community. The well-planned city includes more than 180 miles of trails for walking and biking and cultural facilities such as the 6,600-seat Henderson Pavilion. Thirteen golf courses — public, semi-public and private — provide year-round recreation.

The decision by the NFL’s Raiders to locate their headquarters in Henderson injected yet another jolt of energy and excitement into the city.

Just down the street from the Raiders’ facilities, for instance, a new 300,000-square-foot, mixed-use project by Stable Development is planned to include two seven-story office towers, medical office facilities and upscale retail and dining experiences.

While casual, family-oriented suburban lifestyles reign across more than a dozen master-planned communities, housing options are becoming diverse. Sauvage Real Estate, to cite one example, plans a high-rise residential project including 2,920 homes, a 250-room hotel and retail space. The $950 million project known as Henderson West would be built over the next decade.

Modern new business spaces will be available in projects such as Matter Park @ West Henderson, right at the doorstep of the Raiders headquarters. The 26-acre project will provide 300,000 square feet of mixed-use business space — including flex-showroom and distribution operations. 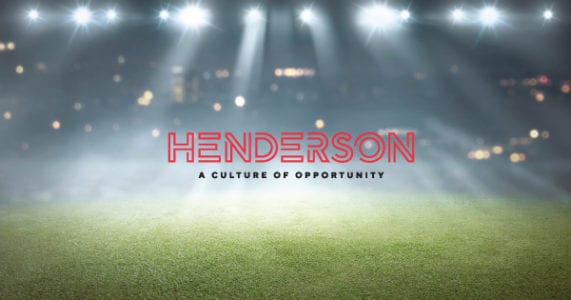 Developers throughout the region recognize that the opportunity zones and redevelopment projects in Henderson provide space for innovative projects, and they’ve come to appreciate the no-nonsense, time-efficient approach of Henderson’s City Leaders and Public Officials.

“A Culture of Opportunity” is the description that Henderson’s leaders apply to their city. More and more, smart corporate executives seize the Henderson opportunity.

Find out how to take advantage of these opportunities at HendersonNow.com.