The future of economic development and the site selection process took center stage at Business Facilities LiveXchange 2019 this week.

BF’s annual event, which was held at the Worthington Renaissance Fort Worth Hotel in Fort Worth, TX, featured a conference program that showcased the prognostications of a futurist and experts who offered a primer in the emerging tools of predictive analytics, artificial intelligence and virtual reality. 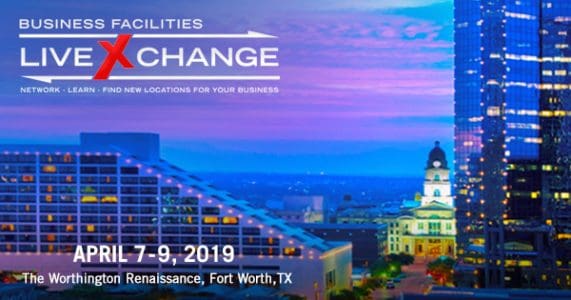 Keynoter Jack Shaw, who labels himself a “pragmatic” futurist, told LiveXchange attendees to prepare themselves for a world in which technological breakthroughs like 3D printing and blockchain will radically decentralize the current models for manufacturing and logistics.

“The global supply chain will shift from the movement of finished goods to the movement of raw materials,” Shaw said, predicting that 3D printing will enable end-users to order up—and produce—complex parts or even complete assemblies at the point of sale instead of in a manufacturing facility.

Glen Weisbrod, Chairman of Economic Development Research Group, detailed the application of predictive scenario analytics to the site selection process and said the data-crunching tool soon would be essential to evaluating the long-term potential of candidate locations by offering a glimpse at future workforce availability, population demographics and the impact of climate change, among other critical decision-making factors.

These bold visions of the near future were supplemented by essential information about how to maximize a major economic development opportunity with tight deadlines in the here-and-now: incentives expert Allea Newbold walked attendees through the intricacies of the new federally designated Opportunity Zones.

Since its creation in 2005 by Group C Media Co-President Ted Coene, the Business Facilities LiveXchange event each year brings representatives of economic development agencies and corporate site selectors together for a series of one-on-one dealmaking sessions to discuss pre-certified projects that are seeking locations. LiveXchange features customized itineraries that ensure a maximum ROI for time well spent at meetings, and networking opportunities in the comfort of a premier venue.