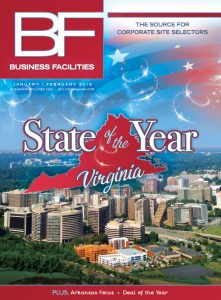 State of the Year: Virginia | Virginia is doing it all. Already home to the nation’s top data center market and dozens of major corporate headquarters, VA’s top five projects in 2018 pulled in nearly $6 billion in capital investment and cemented the Commonwealth’s reputation as a high-tech leader.

Onward and Upward |  The aerospace sector is poised to stay on its growth trajectory in 2019, led by commercial aircraft production and defense spending.

Staying Golden in California |  The California Economic Summit’s 2019 Roadmap to Shared Prosperity outlines how to make the “Dream” possible for more Californians.

Getting Connected in Kansas |  The Kansas Office of Broadband Development is bringing high-speed broadband to rural parts of the Sunflower State.

Competitive Communities in Arkansas |  A new Initiative aims to make locations across Arkansas even more attractive for new and expanding businesses.

Ringing in the New Year Right |  If January is an indication of what 2019 will hold for Indiana, it is going to be a banner year for Hoosiers.

Secure a Spot While You Can |  The largest city in SW Florida, Cape Coral is only 50 percent built out. Here are some hotspots prime for investment.

Hub for Headquarters in TX |  Corporations are finding a comfortable home in the master-planned community of the Woodlands.

Methanol Behemoth on the Bayou |  South Louisiana Methanol and SABIC aim to create one of the world’s largest methanol production sites.