By Business Facilities Editorial Staff
From the January/February 2019 Issue

he Silver Award in BF’s 2018 Deal of the Year competition went to the Alabama Department of Commerce for the Mazda-Toyota partnership’s selection of Huntsville, AL for a new $1.6-billion auto assembly plant, a project that is expected to bring 4,000 direct new jobs to the Huntsville, AL area. 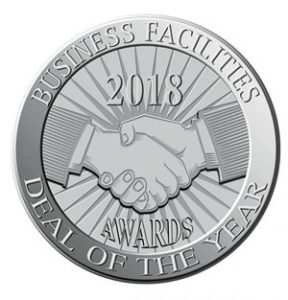 A site encompassing more than 2,000 acres in Huntsville claimed one of the most coveted industrial prizes in years. Mazda Toyota Manufacturing USA, as the joint venture is called, will produce 300,000 vehicles annually at the new assembly plant.

The site selection team working clandestinely on “Project New World”—the codename given to the $1.6 billion auto assembly plant planned by Toyota and Mazda—started off with a list of 300 potential site locations across the U.S.

To secure the project, Alabama’s economic development team had to clear a lot of hurdles. Consultants from JLL Chicago worked closely with Mazda and Toyota on the search, analyzing factors such as workforce, operating environment, site specifics, logistics, incentives and quality of life, among many others.

The JLL consultants developed a screening model that aggregated scores of data points about individual sites and provided a ranking for each of them. As the search advanced, the consultants joined representatives from the companies on site visits that took them to more than 20 states in just six weeks.

Alabama could count on some advantages in this competition. For one thing, the state’s economic development team has been at the center of several large-scale auto projects, starting with Mercedes-Benz’s search for a U.S. manufacturing site in 1993.

Over the years, the team, led by the Alabama Department of Commerce, has worked with Honda, Hyundai, Toyota and hundreds of suppliers.

Alabama also was able to provide a competitive incentives package, though it wasn’t the largest advanced to the automakers.

Significantly, officials in Huntsville and North Alabama had previously assembled a massive parcel of land that was prepared for development. When “Project New World” showed up, they could point to a site suitable for a major assembly plant. This tract had space to serve a buffer zone that would allow the factory to fit in with the community, an important consideration for the automakers.

“By making this plant a vibrant part of that community, we hope to work, learn and grow together with the people of Huntsville and Alabama,” Mazda Motor Corp. President and CEO Masamichi Kogai said when the companies announced their decision.

Toyota already operates an engine plant in Huntsville that has gone through multiple expansions over the past 15 years. Today, the facility has 1,400 employees producing more than 700,000 engines per year. Workers there built the plant’s 6 millionth engine earlier this year.

Read about the rest of the 2018 Economic Deal of the Year Award winners: Gold, Bronze, and Honorable Mentions.