BREAKING NEWS — February 14, 2019 — News sources are reporting that Amazon has canceled its plans to build a headquarters in New York. An Amazon spokeswoman told NPR that “this decision is not reversible, and that the company plans no further negotiations.” Click here to read the statement from Amazon.

By Business Facilities Editorial Staff
From the January/February 2019 Issue

Amazon’s nationwide bidding for its $5-billion HQ2 project—a frenzied auction that drew 238 responses to the eCommerce giant’s calling-all-cars RFP—was unprecedented in the annals of economic development. 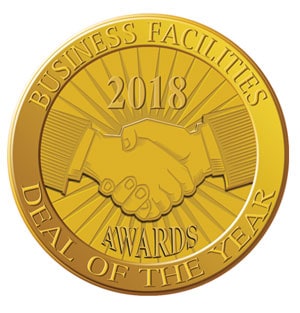 We knew from the get-go that the winning location for the Amazon HQ2 project would instantly become a frontrunner for our 2018 Deal of the Year Gold Award. But when Amazon boss Jeff Bezos unexpectedly split the project into two halves at the last minute, we frankly had no idea how our judging panel would solve the conundrum of choosing between two locations who both won shares of the most coveted economic development project of the new century.

Our judges responded with the Solomon-like wisdom we’ve come to expect from them: they matched Bezos’ audacity in cutting his HQ baby in half by cutting our top award in half: producing the first tie in the history of our Deal of the Year competition and bestowing Gold Awards to both winners of the HQ2 project: Empire State Development for Long Island City in Queens, NY and Virginia Economic Development Partnership for the National Landing site straddling Arlington County and the City of Alexandria alongside the Potomac River.

When NY Gov. Andrew M. Cuomo and New York City Mayor Bill de Blasio shared the stage to announced that Amazon will establish a new corporate headquarters in Long Island City in Queens, NY, the state and city chief execs described the HQ2 project as the first phase of what may ultimately become a $3.6-billion total investment with a direct economic impact of nearly $160 billion for the Empire State between now and 2043.

In 2019, Amazon will occupy up to 500,000 square feet at One Court Square in Queens while working to construct four million square feet of commercial space on Long Island City’s waterfront over the next 10 years, with expansion opportunities for up to 8 million square feet over the next 15 years. Cuomo said Amazon will draw from New York’s talented and diverse workforce to fill at least 25,000 new jobs by 2029 and up to 40,000 jobs by 2034, with an average salary of more than $150,000. The construction is expected to create an average of 1,300 direct construction jobs annually through 2033, the governor said. Overall, NY estimates the project will create more than 107,000 total direct and indirect jobs, over $14 billion in new tax revenue for the State and a net of $13.5 billion in City tax revenue over the next 25 years. The project provides a 9:1 return on investment, Cuomo said.

“When I took office, I said we would build a new New York State—one that is fiscally responsible and fosters a business climate that is attractive to growing companies and the industries of tomorrow,” Gov. Cuomo declared. “We’ve delivered on those promises and more, and today, with Amazon committing to expand its headquarters in Long Island City, New York can proudly say that we have attracted one of the largest, most competitive economic development investments in U.S. history.”

Cuomo added, “With an average salary of $150,000 per year for the tens of thousands of new jobs Amazon is creating in Queens, economic opportunity and investment will flourish for the entire region. Amazon understands that New York has everything the company needs to continue its growth. The State’s more than $100 billion infrastructure program—the most ambitious in our history—combined with our education initiatives like K-12 tech education and the first-in-the-nation Excelsior Scholarship program, will help ensure long-term success and an unrivaled talent pool for Amazon.”

Even before Amazon announced its decision to invest $2.5 billion and create 25,000 jobs at its HQ2 facility in Crystal City, VA, the eCommerce titan already had a huge footprint in Virginia: Amazon’s existing presence in VA includes 8,500 full-time employees and 28,000 small and medium-sized businesses that use the site as a platform for sales; six fulfillment and sort centers, three Prime Now hubs, six solar facilities, several large data centers and the East Coast campus of Amazon Web Services.

Since 2011, Amazon has invested over $29 billion in Virginia, including cloud and customer fulfillment infrastructure and compensation to its teams.

In its Deal of the Year project narrative, VEDP said Virginia’s pitch to Amazon for HQ2 “represents a new model of economic development for the 21st century.” In addition to performance-based incentives, the project and the people of Virginia will share the benefits from “extensive, long-lasting investments in Virginia’s education, workforce and transportation infrastructure.”

“Amazon’s major headquarters will be located in National Landing, a vibrant Northern Virginia community with the sufficient talent and infrastructure to support a company of this caliber,” the VEDP narrative continued. “However, the economic benefits of the project will resonate far beyond Northern Virginia. With the largest job creation in Virginia history, the project will result in a cumulative increase of nearly $3.3 billion in state general fund revenues for 25,000 jobs within 20 years, after subtracting post-performance company incentive payments. In addition to the new direct jobs, the Commonwealth estimates the creation of more than 22,000 indirect jobs in Virginia.” VEDP estimates Amazon’s investment will have a direct economic impact of more than $55 billion over the 20-year incentive term with Amazon.

Virginia’s proposal to Amazon described Northern Virginia as “not only a fertile base for growth, but [also] an engaged and trusted partner with a similar commitment to technological innovation, community empowerment and environmental sustainability.”

VEDP said the National Landing site offers “the rare combination of a massive site in a vibrant, transit-rich, urban location.” Straddling both Arlington County and the City of Alexandria alongside the Potomac River, National Landing contains over 17 million square feet of existing commercial space and 150 acres of developable land. “In National Landing, Amazon will be surrounded by top talent, tremendous infrastructure and a spectacular quality of life.”

Read about the rest of the 2018 Economic Deal of the Year Award winners: Silver, Bronze, and Honorable Mentions.