ur judges tapped the Michigan Economic Development Corp. as the winner of the 2018 Deal of the Year Bronze Award for the revitalization of one of Detroit’s crown jewels—the city’s majestic Michigan Central Station Depot. 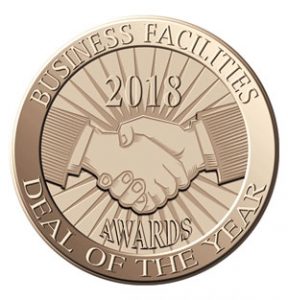 For decades, the crumbling façade of the iconic Michigan Central Station Depot, a few blocks from the Detroit River and a long way from its glory days, has been the often-cited symbol of the city’s decline. All that began to change in June 2018, when Ford Motor Company announced its purchase of the long-vacant building and its plans to historically renovate the station and redevelop other surrounding areas in the Corktown neighborhood of Detroit.

With the support of several partners, including the Michigan Economic Development Corporation (MEDC), the Detroit Economic Growth Corporation (DEGC), City of Detroit and others, the finished project will become the centerpiece of Ford’s new 1.2 million-square-foot Corktown campus and mobility hub. The remaining 300,000 square feet will serve as a mix of community and retail space, residential housing and commercial space for local entrepreneurs.

With an overall investment of $738 million, the state-of-the-art Corktown facility will be where Ford and its partners develop autonomous and electric vehicles, and design urban mobility services and solutions that include smart, connected vehicles, roads, parking and public transit.

Ford’s investment is bolstering a new mobility industry in the state and positions the Motor City to lead the next transportation revolution.

Secondary industries including automotive suppliers and original equipment manufacturers, as well as technology, telecommunications, cybersecurity and others in the mobility space are expected to see growth as a result of this project.

Set to be complete in 2022, the project will bring approximately 5,000 direct, permanent jobs. An additional 4,593 indirect and induced jobs are also projected to be created by Corktown campus development over the next 10 years. The estimated total economic impact of this project in the next decade is more than $15.6 billion.

In addition to the redevelopment of the Central Station Depot, Ford also purchased the former Detroit Public Schools Book Depository, two acres of vacant land, and the site of an old brass factory. Utilizing a Renaissance Zone and other tax abatements from MEDC and the City of Detroit to include these additional properties has never been done before and took months of collaboration and teamwork between the partnering organizations to finalize.

“Michigan Central Station is a place that in many ways tells the story of Detroit over the past century,” said Bill Ford, the company’s executive chairman.

“We at Ford want to help write the next chapter, working together in Corktown with the best startups, the smartest talent and the thinkers—engineers and problem-solvers who see things differently—all to shape the future of mobility and transportation,” he said.

Read about the rest of the 2018 Economic Deal of the Year Award winners: Gold, Silver, and Honorable Mentions.