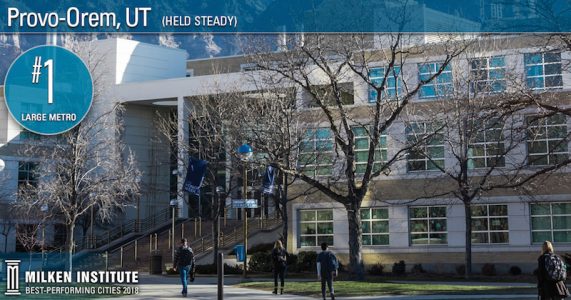 Published annually since 1999, the Milken Institute’s Best-Performing Cities: Where America’s Jobs are Created and Sustained measures the economic vitality of 200 large metros and 201 small cities. Metrics include growth in jobs, wages and salaries, and technology output. These rankings help policymakers, investors, and companies understand where local economies are thriving.

Provo-Orem was among several Middle American cities in the top 10, but their success did not preclude growth in Silicon Valley. San Jose rose nine places to finish second with the help of tech giants such as Apple and Google. Austin, TX placed third after adding nearly 5,000 jobs in its professional, scientific, and tech-services sectors during 2017.

“High-profile corporate site searches like Amazon’s HQ2 competition highlight the importance of a strong knowledge-based economy,” said Minoli Ratnatunga, co-author and Milken Institute director of regional economics research. “Tech companies, augmented by research universities, are among the most powerful assets a metro can have in our tech-driven economy.”

Five California cities and three Utah cities placed in the top 25. San Francisco held steady in fourth place, and Oakland-Hayward-Berkeley was No. 14. Southern California’s Riverside-San Bernardino-Ontario area, buoyed by Amazon’s continued investment in a major logistics center, rose five places to No. 15. Researchers also documented a big jump for Santa Rosa, which rose 25 places to No. 18.

In Utah, Provo was joined by No. 10 Salt Lake City and No. 21 Ogden-Clearfield. St. George, UT was No. 2 in the small-metro rankings.

Merced, CA showed the most improvement, leaping 56 places to No. 38 as a result of expansion at the University of California, Merced. Hiring at Tesla’s Gigafactory 1 helped Reno, NV rise 26 places to No. 11.

Among small cities, Bend-Redmond, OR retained the top spot for the third year running thanks to stellar job and wage growth. Gainesville, GA remained in third place.

“Utah’s industrious and innovative people continue to drive growth in the technology and business communities,” said Governor Gary Herbert. “We are focused on laying the groundwork and infrastructure necessary to support this success far into the future.”

Two Texas cities, No. 3 Austin and No. 5 Dallas, were in the top 5. Other inland metros in the top 10 were Raleigh, NC; Orlando, FL; and Fort Collins, CO.

The full report with a table of all the metros evaluated is available online.