The greater Nashville, TN area was ranked as the strongest Metropolitan area economy in the United States in POLICOM’s latest annual community “economic strength” rankings. The area has enjoyed consistent economic growth for a very long time due to its diversified economy. 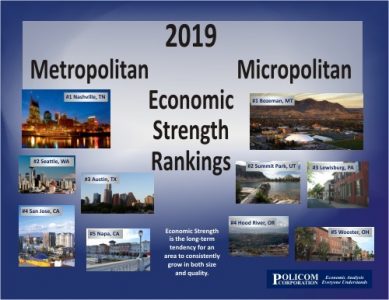 For the second year in a row, Bozeman, MT ranked number one among the Micropolitan areas as a result of rapid growth in professional services and manufacturing.

“The top rated areas have had rapid, consistent growth in both size and quality for an extended period of time,” explained William H. Fruth, President of POLICOM.  “The rankings do not reflect the latest ‘hotspot’ or boom town, but the areas which have the best economic foundation.”

POLICOM’s analysis determines if an area is growing or declining, identifies what is causing this to happen, and offers solutions and ideas to communities on how to improve their local economies. The study measures 23 different economic factors over a 16-year period, from 2001 to 2017.

These are the 10 strongest Metropolitan and Micropolitan areas according to POLICOM:

According to Fruth, the rankings reflect “how” an area has behaved, but not “why.” Each community has its own economic characteristics and can grow or decline for different reasons.

When asked “How can a community improve its economy?” Fruth responded, “A local economy will grow and expand in direct proportion to the amount of money flowing into the area. For the most part, money is imported to a community by way of the business activity of the primary or contributory industries. These enterprises sell their goods or services outside the area, thus importing wealth to the economy.

“A vast, vast majority of the businesses in the community such as retailing, healthcare, most services, and even local government, are dependent upon the money being imported to the area by the primary industries,” Fruth continued. “The strongest economies have caused their primary businesses to grow and expand, causing quality economic growth. Unfortunately, in the weakest areas, the primary businesses have faltered causing the economy to decline.”

Economic strength rankings for all 934 areas are available on the POLICOM website.