Virginia’s Industrial Advancement Alliance (VIAA) region is composed of five counties and one city in the Southwestern region of the Commonwealth, with one of the leading trucking routes traversing the region. Interstates 81 and 77 intersect in Wythe County, VA and the region is bordered by Tennessee to the West, North Carolina to the South, and West Virginia to the North. 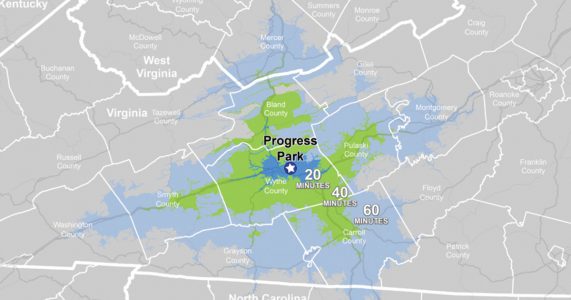 With a rich history in agriculture, the region is now made up of a strong manufacturing base, including everything from snack foods and Gatorade, to leading human resources software and a revolutionary plug less power systems for electric vehicles.

VIAA’s strategic East Coast location is the driving force behind the recent growth in the food and beverage processing cluster. With access to three fourths of the U.S. population within a day’s truck drive, the region is prime for companies that need quick access to their customer base. In addition to the food and beverage industry, the region’s manufacturing base includes automotive-related companies using sophisticated technology to make precision parts for the world’s leading automakers, as well as high-tech companies in the plastics, furniture, distribution, and defense industries.

Internationally recognized companies such as ABB, General Dynamics, Pepsi, and Utility Trailer have made the VIAA region their home. If your company is looking for a place to call home, new industrial and business parks are available throughout the region, as well as existing buildings that are move-in ready or can be adapted to various sizes for manufacturing, office, or warehousing requirements.

Fast developing is a cluster of food processing and beverage companies that take advantage of VIAA’s strategic East Coast location along the crossroads of two major interstates. Also in the mix are automotive- related industries that use sophisticated technology to make precision parts for the world’s leading automakers, and other businesses that utilize high-tech manufacturing expertise in plastics, furniture-making, defense, and distribution.

A DIVERSE MIX OF INDUSTRY LEADERS

A snack food company, Shearer’s Foods, one of the largest producers of private label salty snacks in North America, recently invested $4.75 million to expand its operation in the City of Bristol and increase its workforce to 225 workers.

Another leading employer in the region is K-VA-T Food Stores, Inc, the corporate name of a supermarket chain operating in three states under the name Food City. The 94-store chain serves a current trade area population of more than 2.5 million people. K-VA-T operates Mid-Mountain Foods, a one million sq. ft. warehousing and distribution complex.

Recognized as the “first name in trailers” throughout North America is Utility Trailer that operates two manufacturing locations in the region. Utility Trailer is known for producing the first single-axle trailer and the industry’s first EPA-certified SmartWay trailer.

Other leading employers in VIAA include Klockner Pentaplast that uses the most advanced extrusion technologies to produce specially formulated films for pharmaceutical, medical device, food, and electronics packaging.

Based in Marion, VA, the General Dynamics Armament and Technical Products center of excellence produces composite structures, mobile shelter systems, high-performance radomes, and Resin Transfer Molding products. The Marion General Dynamics plant is one of the top 25 suppliers (out of 600) to Boeing.

With two manufacturing locations in VIAA, and headquartered in Bristol, Strongwell, has been manufacturing high quality fiber reinforced polymer (FRP) products since 1956 using “the continuous automatic process” (today known as “pultrusion”). Strongwell is recognized as the world’s leading and largest pultruder of FRP.

The wood products industry remains strong in VIAA. Well known Vaughn-Bassett Furniture, a long-time employer in Galax, VA, is the largest manufacturer of adult bedroom furniture in the U.S. Founded in 1919, Vaughan-Bassett employs over 600 people in its Galax plant. Another strong local industry is Turman Hardwood Flooring which manufactures pre-finished hardwood flooring from quality Appalachian hardwoods in its Galax facility. This Corridor company also uses by-products from the flooring process to produce wood pellets for heating fuel.

Another leading employer in Galax is Consolidated Glass & Mirror Corporation, a subsidiary of Guardian Industries. In addition to the glass and mirror plant, the company added a new line in 2011 to produce specially coated mirrors used in the technology of concentrating solar power (CSP), a type of solar thermal power.

VIAA companies are at the forefront of employing green technologies in their businesses, and the region is also home to the world’s largest “green” food and beverage facility. The Gatorade Blue Ridge facility, located in Progress Park in Wytheville, is the largest food and beverage site in the world to achieve the U.S. Green Building Council’s certification as a Gold-level LEED (Leadership in Energy and Environmental Design) facility. 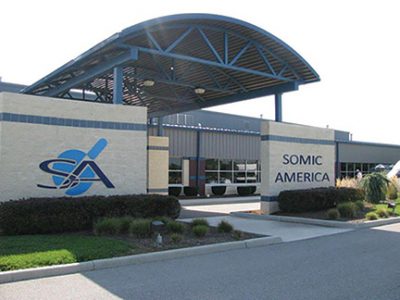 Vaughan-Bassett Furniture Co. in Galax, a founding member of the Sustainable Furniture Council, is committed to manufacturing its furniture in a responsible and environmentally friendly manner. Through its “One for One” program, Vaughan-Bassett plants a tree to replace every tree used in the production of the company’s bedroom and dining room suites. It covers the trees used in all domestic production—96 percent of total production—and the four percent that is imported. The company also installed $2 million computerized rough end systems in their plants that have increased lumber yield by over 20 percent, thereby significantly reducing the number of trees needed to produce furniture.

Rich cultural heritage, coupled with outstanding outdoor recreational opportunities, make the VIAA region a great place to live, work, and play. The region is home to Virginia’s two highest mountain peaks—Mount Rogers and Whitetop—as well as The Appalachian Trail, Hungry Mother State Park, the New River, and many other outdoor recreation opportunities. The possibilities are endless in the Southwest Virginia Region. From hiking, cycling, and camping to ATV trails, kayaking, and rafting, the region has it all. Find out more about what the region has to offer by visiting www.myswva.org.