Communities need to reconsider their use of tax increment financing, or TIF, a popular economic development tool that has often fallen short of its promise to revitalize struggling neighborhoods, according to a new report from the Lincoln Institute of Land Policy. 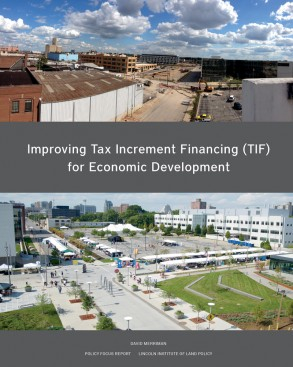 In Improving Tax Increment Financing (TIF) for Economic Development, University of Illinois at Chicago Professor David Merriman reviews more than 30 studies of TIF in communities across the United States over several decades, concluding that “in most cases, TIF has not accomplished the goal of promoting economic development.”

The report explains the history and mechanics of TIF, details how several cities and regions are currently using the tool, and recommends how policy makers can improve TIF practices going forward.

“Tax increment financing has the potential to draw investment into long-neglected places, but its success requires rigorous analysis, transparency, and oversight to ensure that the expenditure of taxpayer dollars truly benefits the public,” Merriman said.

First implemented in the 1950s, TIF is a method of funding economic development in a designated area – a TIF district – by earmarking increases in future property tax revenues that result from increases in real estate values in the district. The tax revenue can be used for public infrastructure or to compensate private developers for their investments.

In theory, TIF generates new property tax revenue by spurring development that would not otherwise occur, which results in a larger tax base. The tool can help build trust and provide for a mutual commitment between local government and developers, and it can facilitate political support for investments by stipulating that taxpayers outside the TIF district will not have to contribute.

However, TIF is prone to several pitfalls, according to the report. In practice, TIF often captures some revenues that would have been generated through normal appreciation in property values, even without the TIF-funded investment. This over-capture of revenue diverts resources away from public services citywide. Cities also sometimes exploit TIF to obtain revenues that would otherwise go to overlying government entities such as school districts.

In addition, TIF can make cities’ financial decisions less transparent by separating them from the normal budget process. In Chicago, for example, $660 million – nearly a third of the city’s property taxes – go to TIF districts, making public scrutiny of these funds more difficult and preventing elected officials from re-prioritizing the spending. Finally, TIF carries the same risks as other types of business tax incentives, which can lead to inter-city competition and short-term decision-making.

Merriman makes five recommendations to improve the performance of TIF:

“While further research is needed, there are clear steps cities and states can take now to improve the performance of TIF,” said Lincoln Institute Senior Fellow Joan Youngman, head of the Department of Valuation and Taxation. “In some cases, policy makers might opt to develop alternative tools for financing infrastructure, affordable housing, and economic development.”