By the BF Staff
From the March/April 2018 Issue

Gov. Andrew M. Cuomo has announced that work has begun for on-the-ground ecological restoration work to “Restore the Gorge” in Niagara Falls. The Western New York Land Conservancy has begun a two-year mission to control invasive species and plant native trees, shrubs, grasses and flowers in the Niagara Gorge from the Niagara Gorge Discovery Center to Devil’s Hole State Park. The $2.1 million project is supported by a variety of State funds, including Buffalo Billion Phase II. It complements Gov. Cuomo’s $70 million revitalization of Niagara Falls State Park and other strategic state investments to strengthen the tourism industry in downtown Niagara Falls. 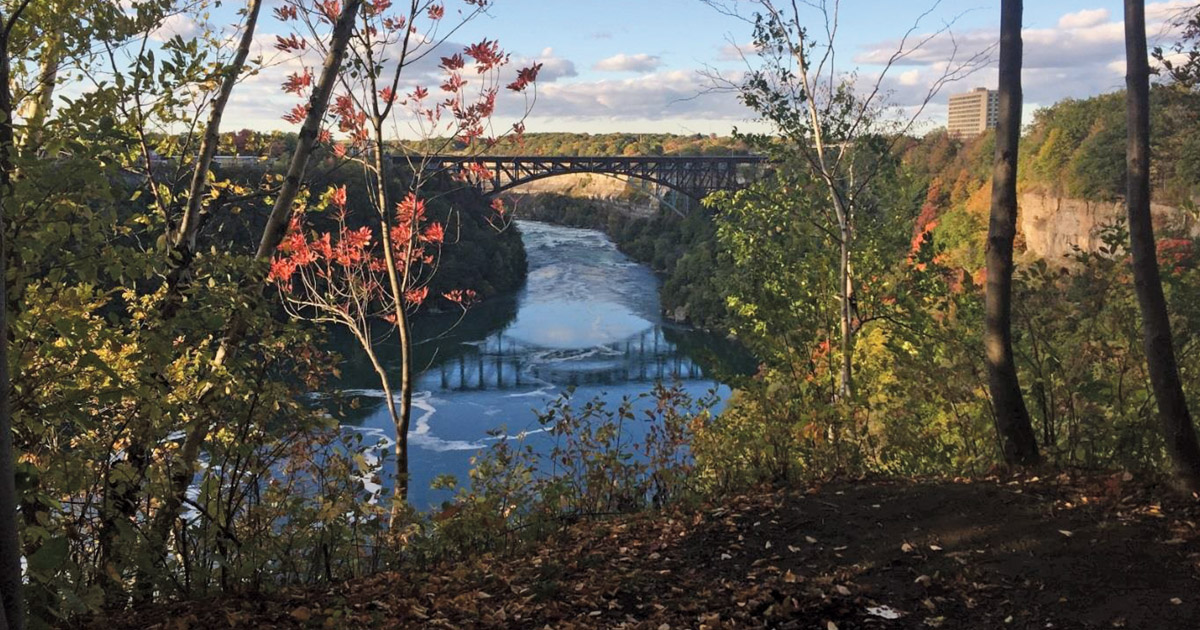 “The Niagara Gorge is central to the natural beauty of the world-class attraction Niagara Falls,” Gov. Cuomo said. “The ecological restoration of this biologically diverse habitat goes hand in hand with our strategic investments that are reinvigorating tourism in Niagara Falls and our dedication to revitalizing the region.”

The Western New York Land Conservancy has been leading efforts to restore and enhance the natural habitat on 33 acres of land along the gorge with funding from the New York Power Authority via the Niagara Greenway Commission Ecological Standing Committee. With the addition of Buffalo Billion Phase II funding, the Land Conservancy will be able to remove invasive species and restore an additional 125 acres within the gorge and along the rim from Whirlpool State Park to Devil’s Hole State Park. This project will transform the ecological health of the Niagara River Gorge and Rim and enhance the visitors’ experience at Niagara Falls.

As one of the most biologically diverse places on the Great Lakes, the Niagara Gorge is home to unique ecological communities including many rare plants, and is also part of a globally significant Important Bird Area. The lower Niagara River rapids are important spawning grounds for freshwater fish including threatened Lake Sturgeon.

Unfortunately, the health of this sensitive environment has been harmed by many factors, especially non-native invasive plants. The Land Conservancy has hired Applied Ecological Services to remove harmful invasive plants like Common Buckthorn, Tree-of-Heaven and Phragmites for the first phase of the project. These invasive species will be replaced with beneficial natives like oak trees, ninebark shrubs and Canada Anemone.

“The State’s investment through the Buffalo Billion to control invasive species and plant native trees, shrubbery, grass and flowers in the Niagara River Gorge will enhance and restore one of the most majestic natural wonders of the world,” said Lieutenant Governor Kathy Hochul. “The governor’s unprecedented commitment to this project builds on the State’s multimillion dollar investments to promote Niagara Falls as a world-class tourist destination.”

Land Conservancy Executive Director Nancy Smith said, “Today we celebrate an opportunity for the world to rediscover the magic of the Niagara Gorge as a vital and magnificent window on Niagara Falls. The Land Conservancy’s work will reweave the diverse and complex fabric of life that blankets the gorge. This tapestry of cedars and ferns, asters and little blue stem grasses are the native plants that feed the wildlife we love, clean our fresh water and support the pollinators that put food on our table. They are the foundation for our mysterious web of life. This is the story we can share with everyone who visits the gorge.”

The Town of Islip has long been known as a leader of economic development in New York. Islip boasts the largest industrial corridor in the Long Island region, major infrastructure advantages over surrounding areas and an Industrial Development Agency (IDA) that has won renown for its continuous ability to attract new businesses. Though Islip faces many of the same challenges as other municipalities during these harsh economic times, the Town is uniquely suited for economic growth and expansion.

One of the prime reasons for Islip’s attractiveness to local, national and international businesses is the proximity these businesses have to Long Island-MacArthur Airport (LIMA), which the Federal Aviation Administration has defined as being on-par with LaGuardia Airport and John F. Kennedy Airport. Having a nationally recognized airport within Islip Town helps local companies conduct their business more effectively and efficiently. Just as MacArthur Airport helps local businesses expand, the airport itself is working to grow its presence to handle the economic demands of the future. LIMA is serviced by Southwest, American and Frontier Airlines.

Just next door to Long Island MacArthur Airport is a Foreign Trade Zone (FTZ). Foreign Trade Zone #52 was created to help businesses with an international scope grow and thrive in Islip. These companies can utilize the FTZ’s singular economic status to avoid costs associated with importing and exporting goods with other countries. The FTZ sits at the intersection of a crucial transportation hub that features railways, highways and a commercial airport and is no stranger to new development. AA Technology Inc., a growing manufacturer and distributor of circuit boards and electrical components, decided to expand in the FTZ and construct its own 36,000-square-foot facility. Because of their strategic location and investment, AA Technology Inc. will enjoy incentives offered by the FTZ and the Islip Industrial Development Agency.

The Town of Islip has a proud tradition of business success, across a variety of industries. But special mention must be made toward three critical industries that have thrived within the town: technology, food distribution and pharmaceuticals. Many technology companies, spanning sectors from aerospace to telecommunications, have found a home in Islip.

All-System Aerospace, a warehouse distributor of helicopter and aircraft parts, has expanded within Islip and leased a larger building that allows them to keep up with market demand. They have remained in Islip largely because the IDA was able to help them adapt and expand to ensure that business was uninterrupted. CPI Aero, a company that manufactures aircraft components, primarily for the U.S. military, was able to expand their operations to a new facility, and also did so with the help of the Islip IDA. Similar to CPI Aero, Sartorius Stedim North America also expanded their operations into a new facility, occupying an additional 40,000 square feet. Sartorius is a leading provider of cutting-edge equipment and services for the biopharmaceutical industry and has invested over $2 million in the build-out and purchase of equipment for a new R&D lab. And most recently, Rockwell Collins (formerly B/E Aerospace), a leading manufacturer of high performance lighting systems for both commercial and business jet aircraft, expanded into a 60,000-square-foot facility in Bohemia. In addition to a $1 million investment in equipment, Rockwell Collins also pledges to create 30 jobs within two years.

Additionally, Islip welcomed Ascent Pharmaceuticals in 2012, a pharmaceutical manufacturer whose operations involve research, development and the manufacture, warehousing, distribution of generic prescription medicines in a wide range of therapeutic areas. With the assistance of the Islip IDA, the company, owned by InvaGen Pharmaceuticals, purchased and renovated an existing 250,000-square-foot facility for $20 million and they expect to invest another $19 million in additional equipment and research. In return for financial assistance, Ascent has pledged to hire 100 new employees immediately, another 150 in the following three years and projects to employ a total of 350 when fully operational within five years. Additionally, in 2015, Ascent Pharmaceuticals broke ground on two more facilities, across the street from their first project, totaling 340,000 square feet of manufacturing and bottling space and will add 120 new jobs. The story of Ascent Pharmaceuticals is another excellent example of how a company can grow and thrive in Islip, a community that understands the dedication and commitment necessary for projects like this to come to fruition.

Most notably, the world’s largest food distributor, Sysco Inc., constructed a 420,000-square-foot facility in Central Islip. Throughout the entire construction process, from planning, to building, to staffing, Sysco and the Town of Islip worked together to address the needs of both the company and the community. The facility has been fully operational since the summer of 2012, and the demands of the facility already have created over 250 jobs with more to come. Throughout the entire recruitment process, SYSCO has placed a special focus on hiring from within the community. The distribution center boasts many unique features, including a state-of-the-art hydrogen fuel station to power all of the forklifts in the facility. This project has been a model for how local governments, civic groups and businesses can work together and be proud of the finished product, which will keep all parties satisfied for years to come.

Through all of these developments, the Islip IDA has continuously demonstrated its ability to work with businesses to build partnerships between government, businesses and residents. As a result of its many accomplishments, the Islip IDA was named the 2011 Suffolk County IDA of the Year by the editorial staff of the Long Island Business News. Islip Town will always be committed to exploring new ways to bring jobs and opportunities to Islip, without losing our identity as a community. For information on how your business can grow in Islip, visit www.islipida.com.