By Jack Rogers
From the May/June 2018 Issue

If we ranked the states that got clobbered the worst in the Great Recession, Nevada would be at or near the top of the list. The collapse of the housing market was a crushing blow to Nevada’s economy, as it was in neighboring California and on the other side of the country in Florida. 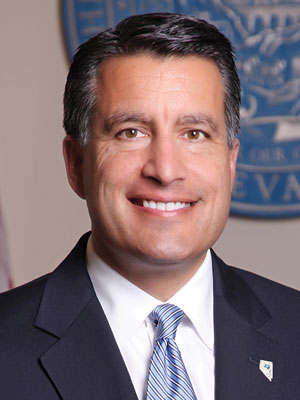 But if we look at the flip side and rank the states that mounted the most impressive recoveries from the fiscal collapse, Nevada also is at the top of the list. The depth of the economic crater Nevada fell into—the state’s unemployment rate hit a staggering 14.5 percent in December 2010—makes its climb back to prosperity nothing short of remarkable.

Nevada did much more than simply ride the rising tide of the national recovery. To put it simply, the Silver State reinvented itself. In an exclusive interview with BF, Gov. Brian Sandoval credited an aggressive economic development strategy as the critical component that turbocharged NV’s rebound. 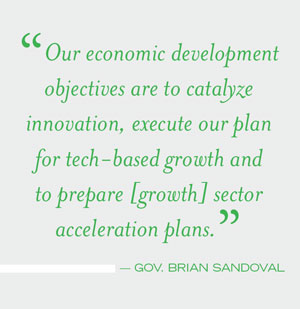 “The recession and the loss of roughly 184,000 jobs forced us to change our approach to economic development,” Sandoval said. “Our economic development objectives are to catalyze innovation in core and emerging industries, to execute our plan for technology-based growth and to work with industry to prepare sector acceleration plans.”

Nevada’s focus on technology-based growth has drawn an all-star team of top tech players to the state, including Apple, Tesla, eBay, Switch, Amazon and Hyperloop One. But Gov. Sandoval wants you to know that this tech transformation has not been achieved at the expense of NV’s traditional status as the nation’s gaming mecca and a top tourism destination.

“Economic diversification does not mean abandoning our traditional sectors of tourism, mining and agriculture. Rather, other industries have expanded to establish a broader economic foundation,” Sandoval told BF.

By just about any economic indicator, Nevada’s robust economy is in a leadership position.

“Today, Nevada leads the nation in private-sector job growth. We’re ranked No. 1 in personal income growth and second in population growth,” Sandoval said. “A record 1,373,700 Nevadans are now working. That’s 261,100 more jobs than the recessionary low, and these jobs are spread across a more diverse industry mix.

A “GET THINGS DONE” STATE

A critical element of Nevada’s successful transformation into a high-tech hub can be found in the state’s willingness to match the warp speed of high-tech development with state programs that can move just as fast—what Sandoval calls sector acceleration plans.

“As [Tesla Founder] Elon Musk said, ‘you’ve created a state where you can move quickly. It’s a real get things done state,’” Sandoval told BF. “I believe other businesses leaders recognize that as well.”

Apple CEO Tim Cook was singing the praises of NV’s ‘get things done’ mantra when he and Gov. Sandoval attended a groundbreaking for Apple’s facility near Reno. “Reno plays an incredibly important role in the products and services that we provide our customers worldwide,” Cook said. “Without the data center here, none of this would be possible. We’ve invested $1.6 billion in the region today and, over the course of the next six years, we intend to invest an additional $1 billion.”

When Business Facilities named Tesla’s Gigafactory as our 2014 Economic Development Deal of the Year, economic analyses predicted that the lithium battery facility could have a direct impact of up to $100 billion on Greater Reno and the Western Nevada region. Gov. Sandoval gave us an update on the ripple effect of this 5-million-square-foot mega-project.

As of the most recent compliance audit on September 30, 2017, the Gigafactory partners have made nearly $3.3 billion in capital investments and hired 2,417 qualified employees (at average hourly wages of $37.66), as well as 12,411 construction workers. The current numbers are even higher as production has ramped up.

Tesla’s presence has attracted automotive suppliers like SA Automotive and Ellsworth Adhesives to the area. The Tahoe Reno Industrial Center, where the Gigafactory is located, has attracted Google and Nevada-born Switch, which is building the world’s largest data center campus there.

During Gov. Sandoval’s tenure, Nevada has become a leader in the development of unmanned aircraft systems. The state also has put down a marker that it intends to be a major player in the emerging cybersecurity industry.

Sandoval recently applied for the FAA’s UAS Integration Pilot Program (IPP), which aims to enable the deployment of drones in populated areas. In December 2013, Nevada was chosen to be one of one of just seven FAA-designated unmanned autonomous systems (UAS) aviation test sites and the only one to encompass an entire state.

In March, the Nevada Institute for Autonomous Systems (NIAS), who manages the Nevada UAS Test Sites, and its NASA Unmanned Traffic Management (UTM) partners flew multiple drones over a week-long testing period at the Nevada UAS Test Site at the Reno-Stead Airport. The testing focused on airspace management technologies that will enable the safe integration of UAS into Nevada’s airspace.

During the drone test week in NV, a team from the Reno Fire Department simulated an incident with a victim experiencing severe blood loss and who needed an immediate transfusion. A multi-rotor UAS from Drone America was equipped with a container which held an actual packet of blood to be transported via drone.

“Nevada, through the NIAS, played a significant role in the pioneering use of drones and is well positioned, thanks to several international cooperative agreements, to continue the integration of this technology into our airspace, economy and daily lives,” he added. “Based on recent tests and developments, this growth is already well underway.”

“The cyberdefense center, run by Nevada’s first cyberdefense coordinator, will help our state detect, prevent and respond to cyber-attacks and stand ready to partner with local governments and the private sector to minimize cyber risks,” Sandoval explained.

The governor made it clear that he views cyber defense as a national as well as a state imperative. “In our country there are now five battlefields in our never-ending fight for safety and security—land, sea, air, space and cyberspace,” he declared, adding. “I am proud that Nevada remains a leader in cybersecurity.”

In his 2017 State of the State Address, Sandoval identified workforce development as a critical priority for NV. He predicted that, by 2025, about 60 percent of all jobs in Nevada will require some form of post-secondary degree or other credential, and he noted that currently only 30 percent of Nevadans between the ages of 25 and 34 meet this standard.

Sandoval enacted the Workforce Innovations for a New Nevada (WINN) initiative, which is helping to arm employers with skilled employees. In just over a year, WINN has made more than $3 million in strategic investments of skill attainment and progression in the advanced manufacturing sector.

The program is administered by the Governor’s Office of Economic Development (GOED) and is a coordinated effort with Nevada System of Higher Education; the Nevada Department of Employment, Training and Rehabilitation; the Governor’s Office of Workforce Innovation; and Nevada companies. The WINN fund makes strategic investments in industry partnerships to ensure that new and existing businesses in Nevada will be able to recruit and retain qualified employees. WINN also provides a pipeline of qualified workers to meet the increased demand of highly skilled individuals across the state.

As with NV’s other economic development initiatives, speed is an essential element of the state’s workforce development effort.

“We want Nevada to be synonymous with nimble,” Sandoval explained. “We quickly worked with Panasonic and Tesla to tailor and implement curricula for the creation of an advanced manufacturing talent pipeline for the Gigafactory. That proven model is ready for companies big and small, across a variety of sectors, to meet their workforce needs.

LEAP frameworks bring together employers, education institutions, non-profit support organizations and government agencies in a holistic strategic approach to ensure that workers will have the skills needed to succeed in both the short- and long-term in the New Nevada.

Solar power was a requirement to win the Tesla battery plant, which is relying on electricity generated by solar panels on its roof. Sandoval said that the development of renewable energy resources has been critical to the success of Nevada’s transformation into a high-tech titan.

“Our growth in advanced manufacturing and IT is a big driver for development of our solar and clean energy infrastructure,” Sandoval told BF. “For example, Apple, Switch, Rackspace and ViaWest are investing billions in data centers here, which are very energy intensive. The companies want the facilities to be powered by clean energy, which in turn has increased investment in that area.”

Switch, which uses 100-percent renewable energy for all of its operations, recently announced the Gigawatt 1 project in Nevada, which will be the largest solar project in the United States. The project will produce some of the lowest-priced solar power in the world and generate enough clean energy to power nearly one million homes.

Sandoval revealed that NV is preparing to turbocharge its efforts to become a top-tier destination for foreign direct investment by launching the Nevada Global Initiative. The governor said he expects the initiative to expand the trading partnership he cemented with Poland during a trade mission to the Eastern European nation last fall.

“The bilateral partnership between Nevada and Poland continues to surpass any expectations we had prior to our first trade mission in 2015,” Sandoval said. “With more than 15,000 Polish immigrants and 40,000 people of Polish descent calling Nevada home, our special relationship has been strengthened by cultural ties; now we have formalized trade and educational opportunities between our two dynamic economies, including partnering on drone testing. With the upcoming launch of our Nevada Global initiative, we look forward to welcoming additional Polish companies.”

Sandoval said Nevada is an attractive destination for FDI because it has become one of the top business destinations in the world. Nearly 7 million people a year come to Las Vegas for conventions, representing nearly all of the Fortune 500 and thousands of other global companies.

“Because of conventions, Las Vegas has become a global marketplace, where deals get made and ideas are born,” Sandoval noted.

The governor recently nominated 61 locations in the state for eligibility to receive Opportunity Zone tax incentives created under the Tax Cuts and Jobs Act of 2017 to assist low-income and disadvantaged communities. Sandoval told us he is committed to making sure that NV’s growing prosperity reaches all parts of the state, including rural areas.

“During my time as governor, we have invested significant resources across Nevada. While we have seen substantial returns, there are still parts of our state that need additional assistance. It is my hope that by nominating these low-income opportunity zones, private investors will choose to fund projects in these areas that benefit the Nevadans who need it most. What’s more, we believe that communities surrounding the opportunity zones will also benefit from the investment,” he said.

If Gov. Sandoval could change one widely held perception about Nevada what would that be?

“That Nevada is just a tourist state,” he told us. “We have diversified substantially in the last eight years, and while tourism will always remain a part of our state, it is no longer the only part.”