By Jack Rogers
From the January/February 2018 Issue

When a state nearly doubles in a single year the amount of capital investments that are streaming into its economy—and sets a record for total annual investments—attention must be paid. In 2017, it got a lot greener in the Bluegrass State, and we’re not talking about the legendary turf at Churchill Downs. Capital investments in Kentucky surged to $9.2 billion last year compared to $5.1 billion in 2016, the previous record for statewide success in economic development; the 2017 capex bounty brought with it the promise of more than 17,000 new jobs

In a wide-ranging interview, Gov. Matt Bevin said last year’s project surge in Kentucky is not an anomaly; instead, the governor confidently declared, the 2017 record will become a benchmark for the shape of things to come.

“I think we’re just getting warmed up,” Bevin said. “I can’t predict we’ll do $9 billion in new business every year, but I’m confident that numbers like $5 billion will be a distant memory—our expectation is that [$5 billion is] a floor and not a ceiling.” 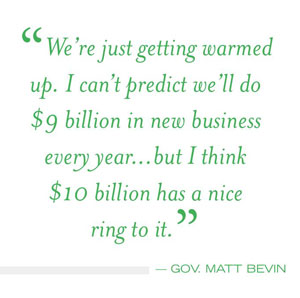 Amazon’s announcement early in 2017 that it would invest nearly $1.5 billion to establish a centralized air hub in Northern Kentucky would have been a big win for any state. For Kentucky, the decision cemented the state’s position as one of the dominant logistics hubs in the world (KY already is home to the UPS global hub in Louisville and DHL’s global air cargo operations).

Amazon will develop a $1.49-billion air cargo hub to service its Amazon Prime customers at Cincinnati/Northern Kentucky International Airport (CVG). The new air cargo hub, which will be located on 900 acres of CVG property, will create 2,000 new jobs.

Before the air cargo hub was announced in January 2017, Amazon already was one of the largest employers in the Bluegrass State, with more than 10,000 full-time workers at 11 fulfillment centers across the state.

“As we considered places for the long-term home for our air hub operations, Hebron quickly rose to the top of the list with a large, skilled workforce, a centralized location with great connectivity to our nearby fulfillment locations, and an excellent quality of living for employees,” said Dave Clark, Amazon Senior VP of Worldwide Operations.

According to Gov. Bevin, Amazon’s original plan was to develop its air cargo shipping hub in two stages, starting with a partnership with another carrier before choosing a site for its own hub.

“They were hoping to find a partner like a DHL that they would start to experiment with and then maybe later announce where they would build their shipping hub.” Bevin said. “We were able to work with them to prove that they could do A and B together. We proved to them we could do things faster and better than they thought possible.”

The addition of the Amazon Prime hub will make Kentucky by far the air freight capital of America. “There’s not a single state that will do more of it,” Bevin said.

Braidy Industries Inc. announced last year it will build a $1.3-billion aluminum mill and create 550 advanced manufacturing jobs in Greenup County, KY to produce sheet and plate for the automotive and aerospace industries.

The company will begin construction this year on the 2.5 million-square-foot facility in the EastPark Industrial Center near the city of Ashland in the state’s northeast corner; completion is scheduled for 2020. Initially, the facility will produce about 370,000 tons of aluminum per year for the automotive and aerospace industries, with opportunities to expand over time.

“Braidy Industries’ decision to locate in Eastern Kentucky has the potential to be as significant as any economic deal ever made in the history of Kentucky,” Bevin said. “This $1.3-billion investment will create enormous opportunity for people in the region, and would not have been possible without our recently passed right-to-work legislation.”

Bevin said Kentucky had “out-worked” other states who had dangled more lucrative incentives in front of Braidy.

“We wooed them away from other states that frankly offered them more financially in terms of incentives and arguably seemed like a better economic opportunity,” the governor said. “But we just made it clear that we were hungrier in all the right ways. Our legislature was willing to do innovative things from an economic development standpoint—investing alongside them, putting our good faith and credit alongside Braidy Industries to prove to them that we would be a true partner to them.”

Toyota’s $1.33-billion investment in its Georgetown, KY plant—the largest of any automaker in Kentucky and the second-largest in state history—makes Toyota Motor Manufacturing, Kentucky, Inc. (TMMK) the first plant in North America to begin producing vehicles using the Toyota New Global Architecture (TNGA). Camrys produced in the Georgetown plant are the first Toyota vehicles made in the U.S. to fully incorporate the new vehicle development and production technology.

“This $1.33-billion investment is part of Toyota’s plan to invest $10 billion in the U.S. over the next five years, on top of the nearly $22 billion Toyota has invested in the U.S. over the past 60 years,” said Jim Lentz, CEO of Toyota Motor North America. “Toyota New Global Architecture is about exciting, ever-better vehicles for our customers, as it will improve performance of all models, including increased fuel efficiency, more responsive handling and a more stable, comfortable feel while driving.”

“This is the largest investment in our plant’s history and it speaks directly to the quality of our people and our products, as well as the partnerships we’ve forged in the local community and across the state,” said Wil James, who was president of TMMK when the investment was announced. Kentucky. “This major overhaul will enable the plant to stay flexible and competitive, further cementing our presence in Kentucky.”

SPEAKING THE LANGUAGE OF BUSINESS

Gov. Bevin credits the private-sector experience of his economic development team—Bevin, Kentucky Cabinet for Economic Development Secretary Terry Gill and Kentucky Cabinet for ED Executive Officer Vivek Sarin who each previously served as CEOs of businesses before they moved into their government positions—as a major advantage in improving Kentucky’s business climate by bringing a business perspective into the top level of government. According to the governor, the business acumen of his team is an eye-opener for businesses considering projects in Kentucky.

“I think we surprise them at every turn and that’s really my goal,” Bevin said. “I want people to come with a certain level of expectation and to be blown away by how business-savvy we are, how effective we are, the follow-up, the timeliness, the quality of our people, the ability to speak as businesspeople to businesspeople in a way they’re not used to when dealing with state government anywhere in America. We have increasing numbers of people who are coming to us because they’ve heard something’s in the water in Kentucky and they want to learn more.”

Bevin said a CEO’s understanding—what it means to put private capital at risk, to make cost-benefit analysis decisions based on a limited amount of capital, to hire and fire people, to find a sustainable way to maintain profitability—is not the norm for people in government.

“Usually people in government [think they have] the luxury of being able to think about taxpayer money as if it’s a bottomless pit,” Bevin said. “It isn’t a bottomless pit, there’s a finite amount of this valuable resource. I think the sense of urgency, the appreciation of the value of time and money, this perspective that myself and Sec. Gill and Vivek Sarin bring to the equation is something that we’re able to communicate to people, that we understand because we’ve been in their shoes.”

“We know how hard it is to fight all of the regulation, to swim uphill against a government that seems to be an adversary rather than an ally,” he continued. “Our ability to communicate to them that we want to be an ally makes a profound difference in terms of our ability to attract business.”

Gov. Bevin said his aggressive approach to bringing new business to Kentucky—which he candidly describes as “out-hustling” the competition—is an outgrowth of the way he was brought up.

Bevin’s mantra for his Kentucky team boils down to this: we’re not going to be outworked.

“I will not be outworked as a governor, my Cabinet of Economic Development will not be outworked as a Cabinet,” he declared. “Does that mean we always win? Of course not. But it does mean that when we lay our heads down on the pillow at night we’ve done everything we can possibly do. We will never give less than 100 percent to accomplish the task.”