5G cellular service is coming soon to a light pole near you—and we mean really close, like in front of your house or around the corner. 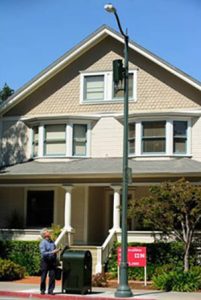 Communications giants including AT&T, Verizon and Sprint are telling us that 5G will represent a quantum leap forward in service, as measured in wireless speeds. 5G is shorthand for fifth-generation wireless technology, which is capable of sending billions of bits of data per second, up from peaks of hundreds of millions today. 5G could cut the time to download a movie to seconds; much more significant: 5G will allow fully autonomous cars and industrial equipment to exchange short bursts of mega-data at warp speed.

But 5G will require a much denser network of transmitters than 4G service and its precursors. Those scenic cell towers camouflaged as friendly (but slightly anorexic) “Evergreen trees” that pop up along the highway every couple of miles can’t do the job for hyper-fast 5G signals, which do not travel as far as the radio frequencies now in use.

We know what you’re thinking: a synchronized flock of small transmitter drones, each disguised as a Canadian goose, will fly overhead in a tight, single-file formation 24/7 at a predetermined altitude (only the Pentagon and President Trump’s favorite pilot will know the precise low-flying orbit). We’ve been thinking the same thing, but we’re both wrong.

The new 5G signals will be transmitted using small equipment placed an average of 500 feet apart in neighborhoods and business districts. Much of the equipment will be on streetlights or utility poles, often accompanied by containers the size of refrigerators—disguised as Postal Service-type mailboxes on the ground. Here’s a high-altitude view of what’s about to happen: the 300,000 cell stations currently providing wireless connections nationwide are about to be augmented by millions of 5G units on or near the ground.

We’ll pause here for a moment to consider whether it’s safe to bombard humans with blasts of mega-microwaves at close range. The answer is nobody really knows, but your 5G-enabled driverless car will be able to give you a hands-free update on this subject from Alexa as the autonomous vehicle takes you to the hospital in 20 years. (Don’t blame us if Alexa gives you an unsolicited, creepy laugh; Amazon announced this week that it’s aware of the problem and trying to fix it.)

But don’t go running outside looking for really large mailboxes just yet. Most of the municipalities in the U.S. have zoning boards with the authority to deny variances and other approvals required for a utility or service provider to install their equipment in a neighborhood. And, as this is being written, a lot of these boards are in the middle of heated debates about the impending 5G invasion. Local government officials across the country are insisting they have the authority to control the placement and look of the new 5G transmitters. They’re resisting pressure to approve a quick installation (quick meaning beginning by the end of this year).

There’s a lot of pressure from some powerful entities to move forward on the installation of 5G infrastructure. The telecom giants, who are licking their chops over 5G networks that are expected to generate at least $250 billion in annual revenue by 2025, want to build the new systems as quickly (and cheaply) as possible. They’re backed by the federal government (including the Federal Communications Commission), which has been directed by the Trump Administration to dismantle regulatory hurdles to just about anything.

Big Telecom is lobbying state legislatures to pass laws restricting local oversight of 5G; since 2016, 13 states have moved to limit local control, and several other states are considering laws to do so. The FCC, which now has a majority appointed by President Trump, has strongly encouraged weakening regulations to accelerate the deployment of new 5G technology, including reducing the role of local governments. This week, FCC Commissioner Brendan Carr announced a plan to “streamline” the environmental review process for 5G infrastructure, saying it could cut costs by 80 percent and enable cellular providers to expand high-speed service to rural areas. The agency will vote on the plan this month.

Sprint has announced that it will start bringing 5G service to Los Angeles, Washington DC, Atlanta, Chicago, Dallas and Houston this year, making it the first mobile service provider to do so, with the six cities set to begin experiencing “5G-like capabilities” as of April. Sprint had earlier this month announced plans to launch its 5G mobile network in the first half of 2019, saying it would use its 2.5GHz spectrum and deploy 40,000 outdoor “small cell solutions,” 15,000 pole-mounted small cells and 1 million “Sprint Magic Boxes”—which it says are the world’s first ground-level wireless small cells.

There’s also a race for global hegemony in the establishment of standards for 5G technology, with Qualcomm, Intel and China’s Huawei each working to develop these standards.

Okay, let’s zoom back up to the stratosphere for some high-level observations. We’ll start with a few basic questions: Why the rush to install 5G infrastructure, a transmission network that will require intrusive equipment with legitimate safety concerns? Is the average consumer really clamoring for an upgrade from 4G to 5G? Is the installation of 5G an essential step toward fulfilling an agenda that will drastically alter our way of life, with or without our approval?

The last question is the most important, and you’re on solid ground if you think the answer is yes. Fifth-generation wireless technology primarily is about improving communications between machines rather than people.

The world’s wealth (and power) rapidly is moving into the hands of a pantheon of tech oligarchs who will run over your grandmother—as well as your town’s mayor—if either gets in the way of the installation of a 21st century hyper-speed digital grid (privately owned infrastructure) over the crumbling remnants of our 20th century cement-and-asphalt transportation grid (what we used to call public works). This new network will permit fully autonomous smart machines to hook up with each other in a synchronized kaleidoscopic ballet in which every significant function—transportation, manufacturing, agriculture, healthcare and (eventually) national defense—is taken out of human hands and transferred to AI-controlled networks of robots.

The tech oligarchs are telling us the machines will free us from the mundane; that’s why they’re always pasting smiles on the faces of the humans in renderings of our Jetsons-like near future (very near, as in 2025). The World Wide Web is morphing into the Internet of Things, Things that need billions of bits of data streaming through our neighborhoods so they can communicate with each other.

The tech oligarchs will soothe us by insisting this is progress. Your refrigerator will know from your social media profile that it will need to reorder horseradish from the supermarket in precisely 17 days so the condiment can be delivered by an autonomous vehicle just in time for you to sit down and eat it with gefilte fish at sundown. Human intervention will not be needed.

Eventually, humans won’t be needed. If you take away the smiles in those Jetsons renderings, the passengers in the driverless cars look like prisoners, prisoners who increasingly are powerless to avoid a destiny of irrelevance or worse.

Driverless cars will command the road in less than 10 years. When these fully autonomous vehicles drive over a decrepit bridge that was built in the middle of the last century and never repaired, we’ll be sitting in the back seat marveling at the digital bread and circuses our 5G devices can serve up to us in seconds. We’ll be so distracted, it may take us a second or two to notice that the bridge is collapsing.

The 5G service will be so fast that the AI avatar who answers our 911 call will have time to ask us our name and note it in the global database of discontinued carbon-based organisms before we hit the water.