The denizens of Philadelphia and New York don’t agree on much. For junk foodies, it’s cheese steaks vs. tube steaks. In the pigskin realm, Giants and Eagles fans glare at each other down (or up) the Turnpike (advantage Eagles). King Tut and Rocky Balboa periodically have a pre-fight stare-down from the steps of the top art museums. 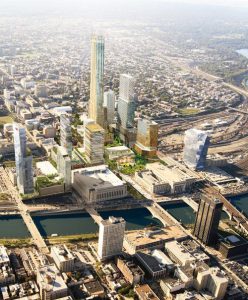 But visitors who arrive by train can agree that neither town puts its best foot forward for rail travelers. Ever since New York demolished its splendid Victorian-style Penn Station to make room for the fourth iteration of Madison Square Garden, train passengers have been forced to crawl out of an underground rat warren as they make their way through the nation’s busiest rail terminal.

Philly’s august 30th Street Station is still standing, but visitors exiting the third-busiest U.S. train facility literally must turn their backs on the heart of the city. The 30th Street Station is positioned like a medieval castle facing west from the city’s downtown, its eastern flank sheltered by the twin moats of I-76 and the Schuylkill River. Before they joust their way to the front of a snaking line of yellow cabs, train travelers can glimpse an empty lot and acres of uncovered rail yards.

But that’s about to change in the City of Brotherly Love, which is in the midst of a renaissance of mega-development.

Ground was broken in November for the first element of an ambitious $3.5-billion project known as Schuylkill Yards, a joint venture of Brandywine Realty Trust and Drexel University. The goal of the project is to transform 14 acres in an area known as University City into one of the nation’s leading innovation hubs, including up to eight high-rise buildings with nearly 7 million square feet of office and lab space. [The University City District of West Philadelphia includes a complex of academic and research institutions, including Drexel, Penn and the Children’s Hospital of Philadelphia. University City is one of the fastest-growing districts in Philly.]

You might assume that the first element of this project would involve putting in the foundation of a new skyscraper that will anchor the development, but you’d be wrong. The Schuylkill Yards project (and several other $1-billion-plus initiatives rising in Philly) is being tailored to millennial tastes, meaning the developers aim to create a space where young people will want to live as well as work. So the November groundbreaking was the first step in the creation of a 1.3-acre park that will sit across the street from the 30th Street Station and be known as Drexel Square.

Drexel Square won’t be your typical vest-pocket slice of urban greenery. A 12,000-square-foot elliptical green lawn will be framed by 30 soaring Dawn Redwood trees (they’ll be 25 feet tall when they’re planted); the public space will include custom-made granite benches, outdoor furniture and raised planter beds filled with shrubs and perennials.

Brandywine CEO Jerry Sweeney has described the park as a combination “launching pad” and “centerpiece” for the innovation-driven neighborhood envisioned for Schuylkill Yards. “At it’s core, Schuylkill Yards is centered around interaction, a place that encourages living, walking, collaboration and fun,” Sweeney said, in a recent newspaper interview.

The loud-and-clear message to millennials that Schuylkill Yards will be a fun place to live and work is no accident: the site is one of three that Philadelphia proposed as a home for Amazon’s HQ2 (Philly’s RFP response was named one of the 20 finalists for Amazon’s $5-billion project, which promises up to 50,000 new jobs).

Schuylkill Yards is the centerpiece of what the city hopes will be a $6.5-billion upgrade of the 30th Street Station District in coming years. A 35-year master plan (finalized by city planners and Amtrak in December) envisions up to 18 million square feet of new development—along with a new residential neighborhood over the rail yards and 40 acres of green space—within University City.

The activity around the train station is just one of a series of mega-developments that are transforming Philadelphia, including:

It took a really long time for the folks in Philadelphia to agree that any building could stand taller than the historic statue of William Penn in the City Center. But once they got over that hurdle, our friends in Philly have not stopped raising their sights. Now they’re busy preparing to scale new heights while reuniting long-divided neighborhoods.