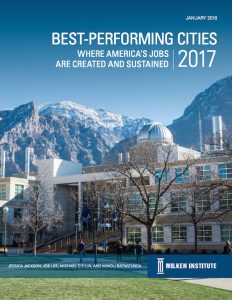 Provo-Orem, UT, with its robust high-tech sector and broad-based job and wage growth, is the Best-Performing City in the United States, according to the Milken Institute’s Best-Performing Cities 2017 Index. Raleigh, NC, with its comparatively low business costs and thriving research and development-driven industries ranked second in the nation. Dallas, which has added more than 50,000 high-skill professional, scientific and technical industry jobs in the last five years, came in third.

The Milken Institute Best-Performing Cities Index has been published annually since 1999. The index uses fact-based metrics in nine categories to evaluate the relative growth of large and small metropolitan areas. Metrics include growth in jobs, wages and salaries, and technology output over time. The index also measures high-tech fields whose concentrations in a metropolitan area are higher than the national average.

Key findings from this year’s index include:

“Provo-Orem, UT outperformed all other metros by a wide margin,” said Minoli Ratnatunga, Milken Institute director of regional economic research. “Home to Brigham Young University (BYU) and a growing technology and entrepreneurial community, the region is adding to its workforce and reaping the rewards of a vibrant industry on the broader economy.”

“Utah’s strong entrepreneurial spirit and business-friendly environment allow companies to grow in communities big and small,” said Gov. Gary R. Herbert of Utah. “As we invest in our skilled workforce and diverse economy, we continue to improve job opportunities and quality of life for residents statewide.”

“Metropolitan areas are crucial drivers of growth in the American economy, taking different paths to prosperity depending on their industry mix, policy choices, and available resources. While some parts of the country are thriving, others are falling behind,” explained Kevin Klowden, executive director of the Milken Institute’s Center for Regional Economics. “Our goal is to help businesses, investors, industry associations, development agencies, government officials, academics, and public-policy groups monitor and evaluate how well their region is adapting to and planning for both current and future economic trends.”

The full report, including tables with all 401 large and small regions evaluated, is available online.