Fears that uncertainty over Brexit would negatively impact real estate investment seem to be unfounded, as London was ranked the top city for global real estate investment in 2017,  according to the latest research from JLL. Investment in London increased by 35% from 2016 to $33 billion in 2017, while Los Angeles shifted up to second place in the Top 30 with $23 billion invested, and New York moved into third place with $21 billion.

“It may come as a surprise that the London commercial real estate market has stood firm in the first full year after the UK’s decision to leave the European Union,” said Richard Bloxam, Global Head of Capital Markets at JLL. “2018 will see a number of key decisions during the negotiations and will give us a much clearer picture of what the post-Brexit future will look like.”

The latest JLL data shows resilience in the global real estate market, despite geopolitical uncertainty. Transaction volumes reached close to $700 billion for the full-year 2017, exceeding the robust levels of 2016. Investment activity is poised to continue its strong performance, with the weight of capital seeking to access the sector still significant and investors actively looking for new ways to deploy funds.

Even with an expanding amount of capital targeting real estate, JLL predicts that real estate investment volumes will be 5-10% lower in 2018 as the challenges of finding available assets to purchase, combined with continuing investor discipline, are likely to constrain growth in volumes. This evolution in capital markets will accelerate the drive for investors to consider new strategies with a greater focus on entity-level deals, recapitalizations, refinancing and broader debt strategies, as well as a wider investment universe of real estate sectors and cities. 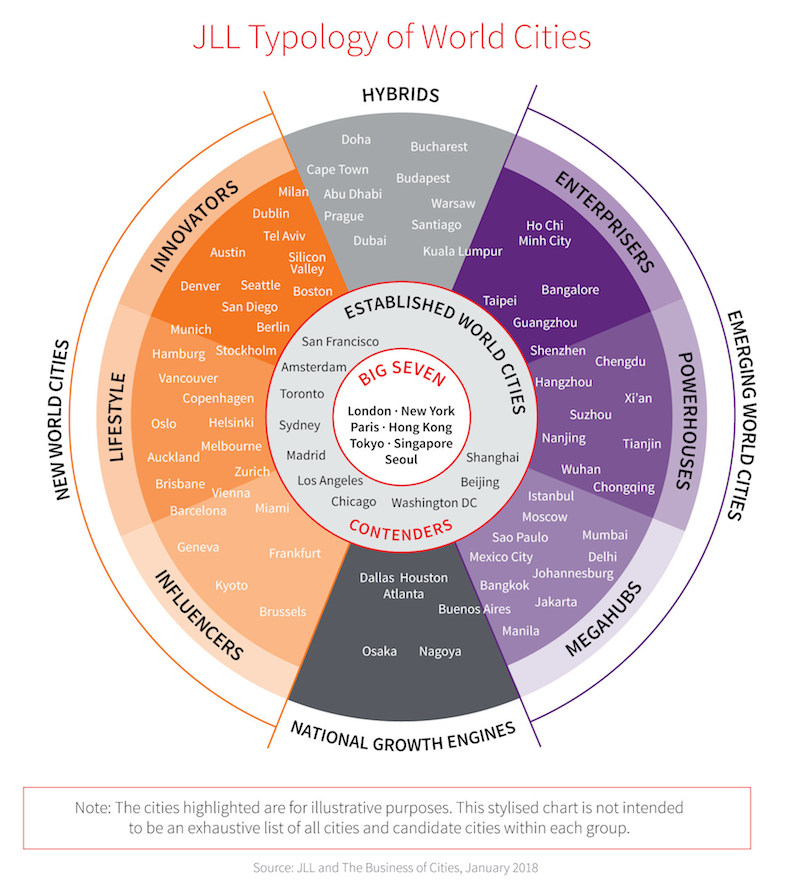 The global investment landscape continues to be dominated by the Big Seven cities — an elite group of the world’s most globalized and competitive cities — which include London, New York, Tokyo, Paris, Singapore, Hong Kong and Seoul; all seven were featured among the Global Top 10 in 2017.

The data reveals a power shift between two of the Big Seven — London and New York — and Contender Los Angeles. London took the top position as the world’s most traded city with investment volumes rebounding by 35% from 2016 lows, supported by significant activity by cross-border purchasers, in particular from Hong Kong, the U.S. and Germany. The Asian members of the Big Seven also saw investment activity increase in 2017, with major transactions by offshore investors contributing to double-digit growth in Hong Kong, Singapore and Tokyo.

Despite dominance at the top of the rankings, the overall share of global investment accounted for by the Big Seven fell to 19% in 2017, its lowest level since 2006. A lack of product and high pricing for prime assets in this group has contributed to strong investor demand in a second tier of Contenders — cities with many of the gateway functions, scale and assets of the top group, pushing to join the established elite.

In true Contender style, Los Angeles has displaced New York in the 2017 global rankings, climbing into second place, and Amsterdam saw investment volumes nearly double in 2017. Other Contenders such as Sydney, Shanghai and Toronto also saw higher levels of activity, with Shanghai registering its strongest year on record.

The World Cities: Mapping the Pathways to Success report is based on 300 global indices and benchmarks that assess the relative performance of cities including finance and business activity, investment profile, demographic diversity, innovation, infrastructure, global reach, quality of life, culture, governance and institutional framework. Other factors include core analysis of city size, GDP per capita, growth rates, industrial structure, position within the national and continental “system” of cities, and in-depth experience working with hundreds of city governments and leadership teams in the development of city and metropolitan strategies.

Download a copy of World Cities: Mapping the Pathways to Success here.