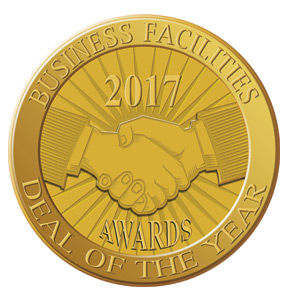 “With an incredible bounty of 13,000 direct new jobs in the next five years and a world-class, 20 million-square-foot production facility, our judges unanimously agreed that the Foxconn project deserved our top honor as the 2017 Deal of the Year,” BF Editor in Chief Jack Rogers said.

The Silver Award in BF’s annual Deal of the Year competition went to Greater New Orleans, Inc. and Louisiana Economic Development for DXC Technology’s commitment to establish a Digital Transformation Center in NOLA’s Central Business District, an initiative that will create 2,000 high-wage jobs in the global IT and business enterprise sector.

Corpus Christi (TX) Regional Economic Development Corp. snared BF’s Bronze Award for the Gulf Coast Growth Ventures ethane cracker, a project that will have an estimate direct economic impact for the region of $11.3 billion over the next 10 years.

Rogers said the 2017 contest was BF’s most robust Deal of the Year competition to date, with more than 30 top-tier projects nominated representing locations across the U.S.

In October, Foxconn (Hon Hai Precision Industry Co., Ltd) confirmed it would build North America’s first 10.5 TFT-LCD flat-screen panel production facility in Mount Pleasant, WI. Foxconn is projecting that up to 150 suppliers will locate in close proximity to the new plant, creating more than 35,000 jobs throughout Wisconsin (including direct, indirect and induced jobs). An estimated 10,000 construction workers will be employed to build the 20-million-square-foot facility, which is to be completed by the end of 2020.

Taiwan-based Foxconn, a major supplier to Apple (producing iPhones in China), received an estimated $3 billion in incentives from Wisconsin, including tax credits and infrastructure upgrades. When the deal was announced, Gov. Scott Walker declared the project would give Wisconsin its own version of Silicon Valley; jobs at the new Foxconn plant are expected to pay about $53,000 a year.

DXC Technology’s decision to establish its largest Digital Transformation Center in New Orleans will generate an estimated annual payroll of $133 million by 2024. The announcement of the deal in November capped a yearlong site selection process that saw the company scrutinize dozens of cities across the U.S. before choosing New Orleans. Gov. John Bel Edwards said the project “cements Louisiana’s position as one of the nation’s fastest-growing states in the software and IT services sector.”

“Louisiana set the standard for diversification into new growth sectors, maximizing the participation of its impressive higher education resources to attract 21st-century businesses,” Rogers said. “High-tech hubs are blossoming across the state, from cybersecurity in Bossier City to IT services and digital media in New Orleans.”

The Corpus Christi MSA was one of four finalists (including two in Louisiana and another location in Texas) for the Gulf Coast Growth Ventures project, which began with an anonymous “blind” RFP process and required all of the contenders to conduct significant engineering and site analysis of all candidate sites. Corpus Christi undertook engineering, data, workforce analytics and infrastructure assessments on more than 20 sites in the MSA before zeroing in on the winning location.

The ethane cracker in Corpus Christi is the first substantial greenfield project in the U.S. for the Saudi Arabian Basic Industries Corp. (SABIC); Gulf Coast Growth Ventures is a partnership between SABIC and Exxon.

“The fact that the Saudis are investing in a $10-billion petrochemical project in Texas underlines the reality that the United States is once again the world’s energy superpower,” Rogers said. “Congratulations to Corpus Christi for a job well done.”

BF’s blue-ribbon panel of Deal of the Year judges also selected these locations/organizations (and the 10 projects they secured) for Honorable Mention Awards in the 2017 contest:

Business Facilities congratulates all of the winners of our 2017 Deal of the Year Awards.