Sitting in an armchair in the comfort of your living room, you slip an encrypted national ID card into your favorite device. You type in your PIN and instantly gain access to every public service offered by your national and local governments—the healthcare system, the financial system, education, law enforcement, tax collection and everything in between. You also have entered a digital network that encompasses a burgeoning collection of private and public enterprises that go well beyond the borders of your country. 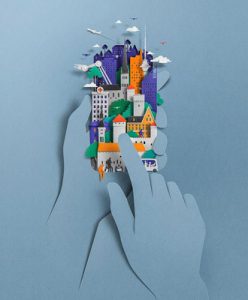 You take a sip from a mug of herbal tea and cast your vote in today’s national election, then you move on to your personal to-do list. One click notifies the municipal prosecutor you’ll be challenging that speeding ticket you received last week (the cops forgot to scan your license plate into their system), the next summons up the lab results from the vet’s recent examination of your cat. Two or three pecks later, a loan application that has pulled all of the required information from the chip on your card is submitted for consideration by your bank, which you selected after examining a detailed record of its balance sheet.

You access your mechanic’s diagnosis of the data you transmitted yesterday from the sensors in the semi-autonomous vehicle parked on your driveway. Satisfied that your brake pads will not need to be replaced for another 46 weeks (based on your established pattern of driving 238 miles per week at an average speed of 46 m.p.h.), you head into the kitchen for a plate of smoked sprats and a snifter of Absolut’s new pomegranate-infused vodka, which arrived this morning directly from the distillery in Sweden, which received an e-order from your freezer two days ago.

Welcome to Estonia, the world’s first truly digital nation-state, which the locals are calling e-Estonia.

The 1.3-million residents of this tiny Baltic republic, which used to be known primarily for its timber industry (half the country is covered with forest), are the pioneers who have crossed the Rubicon into a digital frontier that could only be imagined a few short years ago. The all-encompassing digital society that has been activated in a nation the size of Connecticut, squeezed between Finland and Russia, is being hailed by the European Union as a model for the entire continent. Governments around the world are paying close attention.

Estonia’s digital society is based on a multi-dimensional platform, known as X-Road, which cleverly has been configured to balance public access with the compelling need to protect privacy and the online security of personal data. As described in a recent feature published in The New Yorker, here’s a Cliff Notes version of how it works:

The genius of X-Road derives from the Estonian government’s decision (in a program that began in 2014) not to hold all of the nation’s personal data in a single, Big Brother-type platform. X-Road instead is a digital Grand Central station that links individual servers through end-to-end encrypted pathways, letting information “live locally”—i.e. in your doctor’s office, your school, your bank, etc. As described in The New Yorker, “when a user summons a piece of information, it is delivered like a boat crossing a canal via locks.”

X-Road applies rigorous filtering to data requests, segmenting information so individuals can dictate who sees what (permitting access to some records, but locking off others). The central principle of the program is that the individual owns all of the information recorded about him or her in the database; every time anyone other than the individual looks at this secure data, that access is recorded and reported to the individual. All of an individual’s personal information (and a digital signature) is contained on that person’s digital ID card in its encrypted chip (accessible only via the individual’s PIN).

While user information is zealously guarded, Estonia has established a broad standard for openness of public information, which is defined by the Baltic nation to include business ownership, investments and real-estate transactions, which all are searchable online.

Another decision by the Estonian government has turbocharged the exponential growth of X-Road: the system essentially is borderless and open to private enterprise, permitting other nations, private firms, startups and international enterprises to link up. X-Road permits non-Estonians living in other nations to digitally work (and pay taxes) in Estonia. (In 2014, the government launched a “digital residency” program, which allows logged-in foreigners to access Estonian services as if they were living in the country.

X-Road and the government’s proactive push to digitize society (accompanied by the lowest business-tax rates in Europe and liberal regulations for tech research) is transforming Estonia into a thriving hub for startups (Skype was launched there), with a growing tech-savvy workforce that is in demand throughout the EU.

Government officials claim the nationwide digitization has produced a cost-saving efficiency that saves Estonia nearly two percent of its GDP annually in salaries and expenses, an amount equivalent to the defense spending it’s required to make to meet NATO’s threshold for members of the military alliance.

In the competition between nations, size may no longer be the determining factor for economic hegemony. With its “virtual government” and the connected society it serves, e-Estonia has established a gigantic digital footprint that reaches far beyond the confines of its constricted borders.

The world’s first digital nation has emerged from the ancient forests of the northern latitudes of Europe, and it’s the shape of things to come.