Loyal readers of this space will remember that earlier this year, in a post about the hundreds of thousands of tons of nuclear waste that are piling up around the world, we provided an update on the continuing global expansion of nuclear power. 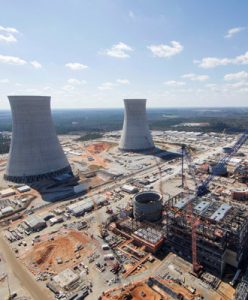 There currently are 449 nuclear power plants operating in 30 countries around the world, with 60 new nuke plants under construction in 15 countries. France, with 58 active plants, has the largest share of electricity generated by nuclear power. China is racing to complete 28 new reactors; India, Russia and South Korea also are rapidly expanding their nuclear-energy capacity.

The glaring exception to this trend is the United States, the country that invented atomic energy. Since the partial meltdown in 1979 at the Three Mile Island plant in Pennsylvania, ground has been broken for only four new reactors in the U.S., two in South Carolina and two in Georgia.

In July, the two South Carolina utilities backing the V.C. Summer plant decided to abandon the decade-long project after spending nearly $9 billion on the two reactors, which were originally scheduled to go online in 2018 but were only 40-percent complete.

Next week, the Georgia Public Service Commission will hold public hearings to discuss the fate of the Vogtle nuclear expansion project, the last remaining active nuclear-power expansion effort in the U.S. A decision will be announced in February on whether to continue the troubled project, which has already seen its original contractor file for bankruptcy as cost estimates for the reactors ballooned to an estimated $20 billion.

The demise of the V.C. Summer project was a devastating blow to hopes for a revival of the U.S. nuclear power industry because the SC project was supposed to showcase a new modular construction scheme for nuke plants that had been touted as a cost-effective solution to the skyrocketing price tags for new atomic energy plants.

Proponents of the V.C. Summer project threw in the towel when the latest cost estimates approached $25 million–more than twice the original $11.5-billion estimate–and engineers said the reactors could not be completed and come online before 2021.

Disputes with regulators and numerous construction problems bedeviled the V.C. Summer project, but it appears that dramatic shifts in the U.S. energy market in recent years accelerated its downfall. The glut of cheap natural gas produced by the massive expansion of fracking has given utilities a low-cost energy alternative; dramatic improvements in energy efficiency also have weakened the case for massive new power plants. More than a dozen operating nuclear power plants in the U.S. will be decommissioned in the next few years, with natural gas expected to fill the energy void their shutdown creates.

“Many factors outside our control have changed since inception of this project,” Kevin Marsh, CEO of SCANA Corp. (which owns South Carolina Electric & Gas, one of two SC utilities behind the V.C. Summer project), said in a July statement. “Ceasing work on the project was our least-desired option, but this is the right thing to do at this time.”

Companies working on a project to build twin AP1000 reactors at the Vogtle plant near Waynesboro, GA filed a recommendation with the state PSC in August to continue construction, despite costs expected to move far above $20 billion. Cost overruns at the project earlier this year pushed Westinghouse, the former engineering, procurement, and construction contractor at Vogtle, into bankruptcy. In their August recommendation to continue the project, Southern Co. subsidiary Georgia Power and other project owners—Oglethorpe Power, Municipal Electric Authority of Georgia (MEAG Power) and the City of Dalton—also announced they had selected Bechtel Corp. to take over daily construction, replacing Fluor Corp. Bechtel is working under Southern Nuclear, a Southern Co. subsidiary that operates the existing reactors 1 and 2 at Plant Vogtle.

Thus far, the Georgia PSC has been supportive of the project despite its stratospheric costs, voting unanimously on Sept. 19 to accept a scheduling order on the plant’s expansion (the order will be the focus of next week’s hearing, with a final decision scheduled for Feb. 6). In its Sept. vote, the PSC indicated it had reviewed factors including “the reasonableness of the revised cost and schedule forecast” for the Vogtle expansion, but a report in the Atlanta Business Chronicle said the commission had set aside an internal PSC staff report which concluded that the Vogtle project was not viable.

Consumer and environmental groups, who were highly critical of the September vote, are gearing up for a fight.

“I am very disappointed that the Commission voted unanimously to approve the proposed scope and schedule…to continue constructing Vogtle 3 and 4 with a price tag now double the original. By the time the PSC finally makes a decision on whether or not continuing the project is in the best interest of Georgia Power customers, another half a billion dollars will be sunk in construction costs,” Liz Coyle, executive director of Georgia Watch, a consumer advocacy group, told the Chronicle in September.

What may have been the final nail in the coffin for the V.C. Summer project—and perhaps is a harbinger of the fate of the Vogtle expansion as well—is a major shift in federal energy policies.

The federal stimulus program enacted by the Obama Administration in the wake of the Great Recession included millions of dollars of subsidies for alternative energy projects, primarily wind and solar power. But Obama also gave a shot in the arm to the SC and GA nuke projects, giving federal backing to loans and including a provision in the DOE’s Clean Power Plan (adopted in 2015) that would have given South Carolina and Georgia credit against their state climate goals for finishing the new reactors. The federal support was credited with persuading state regulators to stick with the reactor projects as costs escalated. But the Trump Administration, despite espousing an “all of the above” energy strategy, is dismantling the Clean Power Plan.

The rising threat of climate change should have set the stage for a renaissance of nuclear power, which in its infancy promised an infinite supply of clean and cheap energy. But that hasn’t been the case in the United States, where, in an atomic age, fossil fuels (in the form of natural gas) still rule the energy landscape, with wind and solar coming on strong.

The U.S. nuclear industry had a window during the past three decades to establish its hegemony in the energy sector, but the safety concerns of potential sites (and investors) raised by a series of global calamities (Three Mile Island, Chernobyl and Fukushima) slowed its progress to a crawl. Inexorably rising costs, cheap alternatives and shifting markets appear poised to shut that window, perhaps permanently.

Can the U.S. nuclear power industry be revived?