The impact of proposed tax reform legislation on the U.S. commercial real estate sector is the focus of Cushman & Wakefield’s newly released research report, The Great Tax Race. The global real estate services firm anticipates that a version of tax legislation reform has an 80% chance of enactment by year-end 2017, with immediate implications for financial reporting. The final version hinges on negotiations between the U.S. House of Representatives and Senate. 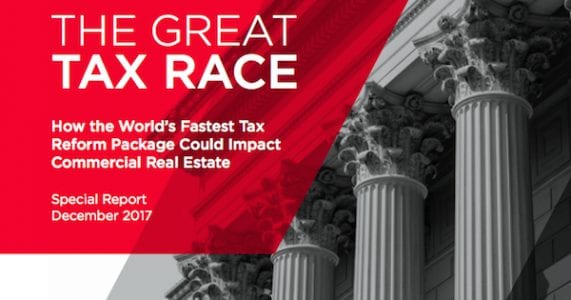 Some proponents claim that proposed tax cuts will lift real, annual GDP growth closer to 3% from the approximately 2% that has prevailed during the current expansion. However, most of their analyses do not consider the likely effects of tax reform on a higher-than-expected trajectory for interest rates or the impact of higher levels of debt that deficit-financed tax cuts will entail. When these are factored in, estimates of the GDP growth boost range from 3 to 9 basis points per year over the next decade.

“While tax reform may have a modest impact on real GDP growth, overall, commercial real estate is a winner, though some subsectors fare better than others,” said Revathi Greenwood, Cushman & Wakefield Head of Americas Research. “Negotiations between the House and Senate will have a significant impact on pass-through entities’ passive investments, more so under the House version, which provides substantial benefits for investors. Multifamily looks to be a winner – at the expense of single-family residential – especially in states and municipalities with high state and local taxes. The retail and industrial sectors should see modest benefits, while the office sector will see minimal impact.”

“Passage of tax reform legislation will prompt restructuring and short-term market flux as investors adapt to a new regime,” said David Bitner, Cushman & Wakefield Head of Capital Markets Research. “A lot of the structuring around CRE transactions is dictated by the need to minimize taxes. Sweeping changes in the tax code could be the cause of material value leakage, and players in the industry are likely to respond by changing their behaviors and tax structures to minimize tax exposure.