On Dec. 30, 2013, the Federal Aviation Administration announced the six locations it had selected to be government-sanctioned test sites for Unmanned Aircraft Systems (UAS), a.k.a. drones. 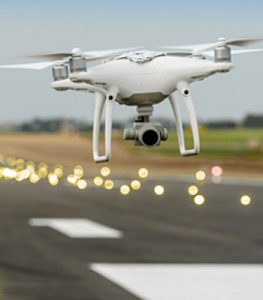 Four of the choices were surrounded by wide-open spaces, as you’d expect them to be: the University of Alaska, the North Dakota Department of Commerce, the state of Nevada and Texas A&M University in Corpus Christi on the Gulf Coast. The two remaining sites were in the middle of heavily traveled air corridors in the East: New York’s Mohawk Valley and Virginia Tech (in a joint effort with Rutgers University in New Jersey). The FAA said its selections were based on ensuring that the test sites encompassed “the diversity of climate, topography and population density” across the U.S.

The six sites were tasked by the FAA with conducting “critical research into the certification and operational requirements necessary to safely integrate UAS into the national airspace in the next several years.” In other words, the test sites will help FAA create federal regulations that will open the skies to a commercial drone industry that has the potential to become a growth sector worth hundreds of billions of dollars in coming years.

For Amazon’s Jeff Bezos, the dawning of the Drone Age can’t come soon enough. When the FAA announced the test sites in 2013, Bezos said he hoped the new drone regulations could be enacted by 2015, when he intended to launch Amazon Prime drone service to deliver packages to his customers.

Sorry, Jeff, but it’s not that easy to figure out how to safely integrate thousands of commercial drones into an overcrowded air-traffic system packed with passenger jets. The earliest we’re likely to see any government-approved interstate air routes for commercial drones is 2020. A few months ago, Bezos himself seemed to acknowledge this reality when he announced that Amazon is investing $1.5 billion to create a global shipping hub for its growing fleet of traditional cargo aircraft at Cincinnati/Northern Kentucky International Airport.

But after three years of preliminary planning, in 2017 there’s been a burst of activity at the six drone-testing sites, and one of them (hint: it’s in the highest-density air corridor) appears to have surged into the lead.

NY’s Empire State Development has invested $30 million (in a CNY Rising Upstate Revitalization Initiative Grant) in the 50-mile drone test corridor; NY also has invested $10 million in GENIUS NY, a business competition focused on unmanned systems and cross-connected platforms. In 2015, the state invested $4 million to install new surveillance and airport surface radar equipment at Griffiss Airport, the focal point of NUSTAR. According to NY officials, 200 tech companies are considering investing in Central NY as a result of the UAS initiative.

The goal of the development of the UTM Corridor is to create the infrastructure that will support “beyond-visual-line-of-site” (also known as “over the horizon”) commercial drone operations. NASA says it will use NUSTAR and the UTM corridor to conduct R&D testing of “critical technologies such as communication, navigation and large-scale UAS traffic management.” In the past year, 645 drone test flights were conducted at the NUAIR-managed test site in Rome, a tenfold increase from the year before.

But not all of the players in Central NY are focused on ushering in the commercial drone industry in the U.S. A few are working on preventing what may become the collateral damage of opening our skies to thousands of remotely piloted machines.

SRC Inc., which has been based in upstate NY for several years, recently entered into a $65-million contract with the U.S. Army to develop a system to “detect and defeat” small drones. SRC is adding 50 engineers to work on the military project (the company says it also expects to add up to 1,000 new workers over the next five years to support the state’s UAS initiative).

“Counter-UAS requirements are creating opportunities contributing to Central New York’s unprecedented growth and accelerating its role as a leader in this technology,” said Paul Tremont, President and CEO of SRC.

New York State also made a related $5-million investment in Gryphon Sensors, also based in Central NY. Gryphon Sensors has developed a mobile Unmanned Traffic Management system called Mobile Skylight, which provides three-dimensional detection of low-altitude-flying, small UAS at a distance of up to 10 kilometers. The unit is described as “a complete mobile command center featuring 4×4 off-road capability that can be taken anywhere without a commercial driver’s license and is for rapid deployment for a wide range of applications, including stadium, special event security, first responder and search and rescue operations as well as infrastructure and utility inspection.”

Okay, call us the skunks at the 21st-century Drone Age party, but we think the last sentence should end in a question mark, as in “U-SAFE?” If we’re developing counter-measures for drones simultaneously with a pell-mell rush to commercialize UAS, it’s not unreasonable to say we’re putting the cart before the horse. Or, to put it in drone-speak, we’re putting the UTM before the Mobile Skylight. So the answer to our question is “NO.”

It’s bad enough that the FAA thinks it’s feasible to soon start allowing thousands of commercial drones to fly in the U.S. airspace, which currently is protected by a tattered and grossly overworked air-traffic control system that has a hard time keeping passenger jets from coming within 100 yards of each other. But when you think of the “counter-measures” that are going to be needed to protect us against unauthorized drones launched by nefarious people, the danger gets multiplied to the 10th power.

On Sunday, a lunatic with a pile of jerry-rigged semi-automatic rifles (including an accessory that turned them into fully automatic machine guns) sprayed bullets from a 32nd-floor window of the Mandalay Bay hotel in Las Vegas into a crowd of more than 20,000 people attending a country music festival below, killing 58 and wounding hundreds. Imagine if this twisted individual had access to a small drone with explosives attached to it; then imagine this attack occurring in an era in the near future in which the skies have been filled with small drones.

In Upstate NY, the Drone Age is dawning in the skies over Syracuse, Rome and the Mohawk Valley. The tech wizards gathered there are creating the framework for commercial UAS, an industry with an ultra-lucrative financial upside that guarantees it will get off the ground soon, whether we’re ready for it or not. The sky is literally the limit.

Memo to trick-or-treaters on the spooky country roads in the scenic valleys of NY: that’s not a headless horseman that just zoomed past you. Apple pickers, get ready to duck.