During the last two decades of the 20th century, after the formal U.S. opening to China in 1978, the biggest economic challenge to the West from the PRC came in the form of low-cost labor. Thousands of U.S. jobs in manufacturing and textiles migrated to the world’s most-populous nation, which was raising its standard of living with millions of low-wage jobs. 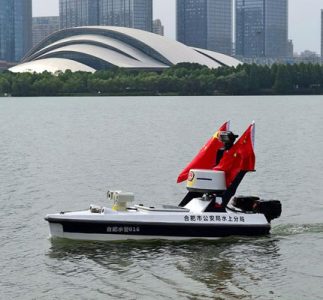 During the first decade of the 21st century, a rising China began to establish domestic industries in key manufacturing sectors, including its own motor-vehicle production. More recently, the PRC has begun to lay the foundation for a Chinese aerospace industry. These advances were viewed in the West as the natural progression of a developing nation, nothing to be alarmed about. We were confident it would be years before China’s cars and jets could compete with global giants like General Motors and Boeing.

But the Chinese, descendants of a 5,000-year-old empire, take a much longer view. The PRC, now the world’s second-largest economy, is deploying the huge cash reserves from its gigantic trade surpluses to buy the future.

The United States—with the best university system in the world supplying the brainpower for the most-advanced labs—has serenely assumed that its status as the global technology leader would not be challenged in our lifetimes. But the PRC has found a shortcut that may enable China to wrest the tech crown off our head in a few short years: China is buying stakes in U.S. tech startups in every advanced technology you can think of, and it’s pushing established tech leaders that want access to its giant market to share their technology. At the same time, the PRC is applying its highly flexible definition of intellectual property to absorb new technology as rapidly as it can, while quietly tightening laws protecting Chinese patents, copyrights and trademarks to prepare for the day it wears the global tech crown.

China’s intentions are clear: it intends to dominate the emerging technologies that will determine economic hegemony in the 21st century, including robotics, artificial intelligence, nanotech semiconductors, electric cars, biotech and everything in between. President Xi Jinping has given this effort a name that reveals its timeline for success: Made in China 2025. Xi has declared that dominance of advanced technology is as important to China as its effort to become a military superpower that can match the U.S.

The alarm bells have started ringing loudly in U.S. tech sectors and even in our distracted and barely functioning federal government, which assumed that outdated security restrictions preventing China from purchasing obvious defense-related technology—think missile-guidance systems—also would deter the PRC from grabbing the crown jewels of our most-recent high-tech breakthroughs.

The problem is that the biggest advances in technology aren’t coming from top-secret labs run by the Pentagon anymore, and there are few restrictions on startups that focus on artificial intelligence, robotics and self-driving vehicles, among other emerging technologies. Cutting-edge tech now lives in the private sector—including the rockets we send into space—and just about all of the emerging technologies have legitimate commercial as well as military applications. To put it simply, that new robotic janitor polishing the floors of your building is a Terminator in an apron.

In April, the Pentagon warned that China has been investing in Silicon Valley startups at such a rapid pace that tougher restrictions must be put in place to stop the transfer of our most-advanced technology. The Pentagon report accused Chinese companies of making “under the radar” (big surprise: the Pentagon can’t resist military lingo) investments to avoid oversight by the Committee on Foreign Investment in the United States (known as CFIUS), the federal watchdog for sensitive technology transfers.

But the Pentagon apparently has trouble keeping track of its own interaction with tech startups and sometimes abandons these startups after picking their brains. For example, the U.S. Air Force reportedly consulted with a Boston-based artificial intelligence startup called Neurala in an effort to make experimental military robots more “perceptive,” but declined to fund the company; Neurala instead turned to a state-run Chinese company for its seed money.

According to recent reports, Chinese firms have made significant investments in companies that make rocket engines for spacecraft, sensors for autonomous ships (like the robot ship pictured above) and printers that make flexible screens, industrial applications that also can become military applications (flexible screens are being deployed in the cockpits of fighter jets).

The Pentagon report said the line between commercial and military technology has blurred: startups, and tech giants like Facebook and Google, are working on products as advanced as anything the Pentagon is developing.

“For example, virtual reality for gaming is at a similar level of sophistication as the virtual reality used in simulators for our armed forces,” the report said. “Facial recognition and image detection for social networking and online shopping has real application in tracking terrorists or other threats to national security,”

Technology for autonomous vehicles and drones, developed with military grants, now is being commercialized by U.S. companies who are receiving Chinese investment funds, the Pentagon report said. An example is Velodyne, which developed light sensors for driverless cars after participating in a competition set up by the Defense Advanced Research Projects Agency in 2005. Last year, Velodyne received a $150-million joint investment from Ford and the Chinese internet giant Baidu.

Made in China 2025 isn’t limiting its reach to U.S. tech firms; the PRC also has unleashed a cascade of investments in Europe’s high-tech firms.

The Pentagon report warned that Chinese investors can leverage their seed money to pressure startups into partnerships or into licensing or hiring decisions that may expose intellectual property and give the investors access to internal databases. The scope of these deals often is hidden because startups and their backers are not obligated to disclose the details. But there is some data that indicates China’s overseas high-tech investments have been exponentially expanding during the past three years: the research firm CB Insights reported last year that China made $9.9 billion worth of tech investments in 2015, more than four times the amount the PRC invested in 2014.

For their part, many tech startups say that Chinese investors often are their only available source of financing.

It will be interesting to see if the Pentagon’s warning on technology transfers to China results in a broad new set of restrictions on Chinese investments in the U.S. There are several aspects to the larger U.S.-China relationship that may slow down or stop this effort:

The relationship between the world’s two largest economic powers is symbiotic. It’s not a coincidence that the size of our federal budget deficit almost mirrors the size of our trade deficit with China (both currently are within range of $600 billion). Despite a lot of tough talk in recent months about addressing the trade deficit, not much of substance has happened. Here’s the dirty little secret: Washington finances our perpetual tide of red ink by printing money, which China facilitates by buying our Treasury bonds; we look the other way while they run up a trade surplus and then they loan it back to us. We’re joined at the hip, economically. [Needless to say, we also need to be in the same foxhole strategically in trying to figure out how to deal with Little Rocket Man.]

For years, with some justification, the U.S. has accused China of maintaining a huge hacking operation (involving an entire division of the People’s Liberation Army operating out of a windowless building in Shanghai) that has been purloining our military and industrial secrets. If China has decided to shift tactics and acquire new technology the American way—by buying a stake in an innovative enterprise—are we really going to declare that this bedrock capitalist tactic is now out of bounds in the country that invented it?

Another hurdle standing in the way of a quick fix to technology transfer is the rapidly evolving decentralization of innovation in an era of rapid tech development. Long gone are the days of high-tech being the domain of a handful of stellar labs nestled in the heart of the military-industrial complex (build a moon rocket and give the masses Velcro, create a DARPA-funded intranet and give birth to the World Wide Web). High-technology is now a grass-roots enterprise, driven by innovative small-scale startups and incubators that are springing up like dandelions. New growth sectors and the tech breakthroughs that drive them are organically emerging at an exponential pace, beyond the capacity of even the highly redundant resources of the U.S. military to monitor and control.

If the Pentagon wants to exercise more control over tech startups, the generals need to take a big slice of their trillion-dollar budget, move it over to the Department of Commerce and fund the development of advanced technology in the United States. The alternative is to extend our symbiotic relationship with China to high-technology and hope that when they achieve parity with us, we both agree to a balance of power between armies of perceptive bots, autonomous ships and pilotless fighter jets in a virtual reality world.