The relentless growth of e-commerce is producing a corresponding decline in retail outlets, including the “Big Box” stores that have long been a defining feature of our suburban landscape. Consumers are voting with their clicks, choosing the ease of online purchasing over a trek to the mall.

But the rise of the digital economy apparently won’t leave a lot of empty buildings in its wake. All of our online purchases must be serviced by regional or local distribution centers to ensure that customers get the rapid delivery they’ve come to expect. So as the Big Box stores move out, huge warehouses are moving in.

An example of this trend can be found in Frackville, PA (the town had that name before fracking was invented, folks), where NorthPoint Development is preparing to demolish the 800,000-square-foot Schuylkill Mall to make way for two new warehouses that will offer a combined 1.2 million square feet of space. The developers say they’re hoping to establish the larger of the two buildings as an e-commerce distribution center.

The demand for new warehouse space is so great that in densely populated parts of the country distributors are starting to maximize their square footage by building up instead of out. Taking a page from the windowless multi-storied facilities that offer you a 12×12 cage to stash grandma’s old couch—or, in terms of ingress and egress, New York’s split-level Port Authority Bus Terminal—high-rise warehouses (already popular in Hong Kong and Tokyo) are coming soon to the U.S.

We’re not talking about skyscrapers here. In this case, “high-rise” is defined as three levels, which doesn’t sound like much but gets pretty complicated if you’re offloading goods on multiple levels from 18-wheelers powered by diesel engines. 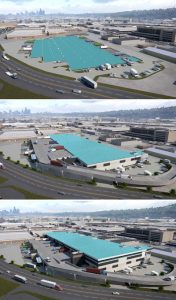 Prologis, a real estate investment trust company based in San Francisco, says the three-floor, 590,000-square-foot industrial fulfillment and distribution facility it’s building in Seattle is the first of its kind in the U.S. The facility, called Prologis Georgetown Crossroads, will be completed in 2018.

Prologis Georgetown Crossroads will feature a circuitous truck ramp leading to loading docks on the second level, and a third floor that will be served via forklift-accessible freight elevators. The first and second floors of the facility will serve as fulfillment warehouses, while the third floor offers space for manufacturing and laboratories.

Level One of the Prologis facility will have 239,029 square feet of storage space that is divisible to 75,000 square feet in various configurations. The space can accommodate up to 62 dock-high doors (in a double-loaded configuration) and two drive-in doors with 28-foot-high clearance. Level One will feature 130-foot-long “truck courts” equipped with 60-foot-long concrete truck aprons; build-to-suit offices also can be installed in several nodes. Level Two will offer 170,331 square feet of fulfillment and distribution space.

Level Three features 180,255 square feet of what the developer is calling “Maker’s Space.” The Maker’s Space will be divisible into units of 10,000 square feet or more that will be suitable for light manufacturing, creative offices, laboratories and production units. The floor will be equipped with two shared exterior loading docks that can be set at multiple positions, served by three freight elevators, each with 16-foot-high clearance that can accommodate forklifts.

The red-hot demand for warehouse space is being driven by an e-commerce juggernaut that shows no signs of slowing down. In the second quarter of this year, e-commerce sales in the U.S. topped $111 billion, approximately 8.9 percent of all retail sales, according to the Census Bureau. According to a JLL survey, warehouse vacancy rates—which averaged 8.1 percent during the past decade—currently are as low as 5.2 percent.

Developers are putting down large bets that the demand for prime warehouse space will continue to increase. In the Cincinnati area, which according to JLL has a vacancy rate of 3.1 percent, two real estate development companies are completing construction of the Hebron Logistics Center on a 49-acre site near Cincinnati/Northern Kentucky International Airport. The Hebron facility consists of two warehouses (a 598,000-square-foot structure and a little brother with 209,500 square feet) that were built without any rental commitments; the developers are speculating that tenants will emerge when the buildings are ready.

The developers behind the Hebron Logistics Center are so certain they’ll have no trouble lining up tenants, they’ve purchased another parcel near the airport and are planning to build two additional warehouses offering a total of 1.7 million square feet of space. This optimism is based in part on Amazon’s decision earlier this year to invest $1.5 billion in an Amazon Prime air-freight hub based at Cincinnati/Northern Kentucky International Airport.

Despite its growing network of distribution centers, Amazon still has a gigantic footprint in the warehouse rental market. The e-commerce giant is renting an estimated 114 million square feet of warehouse space this year; in 2009, the company rented a sliver of that, about nine million square feet.

The squeeze on available warehouse space also is being impacted by Walmart, which has put down a marker that it intends to go toe-to-toe with Amazon in the battle for e-commerce supremacy. Industry analysts say e-commerce operations typically require three times the amount of warehouse space as bricks-and-mortar retail stores in order to guarantee that inventory is on hand and returns can be processed.

So the Big Box isn’t going away, but the new version will have a lot of smaller boxes inside.