It takes a view from outer space to truly appreciate the swath of destruction wrought by Hurricane Irma on several Caribbean islands that were hit with the full force of this Category 5 monster. 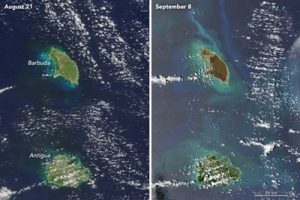 Before and after satellite images, stretching from Barbuda and Antigua in the east to the Turks and Caicos and the Virgin Islands in the west, reveal the apocalyptic wrath of this historic storm in living color. The “before” images show these atolls of paradise adorned with lush green vegetation. In the “after” images, they’re all brown, denuded of their tropical canopies.

The human suffering inflicted by Irma in the Caribbean is heartbreaking and will take months to fully alleviate (and perhaps years to return to a pre-storm sense of normalcy). Our hearts go out to the victims (as this is being written, the death toll in the Caribbean from the storm is estimated to be several dozen, a number that sadly is likely to rise as isolated areas are searched). We urge everyone to pitch in to meet the most pressing needs of those trapped on the islands—including food, water and medical facilities—as quickly as humanly possible.

In the wake of the storm, the leaders of these islands in the Caribbean have bravely pledged to do whatever it takes to bring these tropical paradises back to their former glory, years of rebuilding that will cost of hundreds of millions of dollars for each island.

Barbuda appears to have taken the worst hit from Irma, which tore across the tiny island with Category 5 winds exceeding 185 mph. The day after Irma ripped across Barbuda, Gaston Browne, the Prime Minister of Antigua and Barbuda, declared the island “uninhabitable” for its population of about 1,800. Browne said that 90 percent of the structures on Barbuda had been destroyed.

However, Prime Minister Browne assured the people of Barbuda that the island will be fully restored in a rebuilding that he pledged will greatly improve Barbuda’s ability to withstand powerful hurricanes. He estimated the cost of rebuilding Barbuda will be as much as $300 million. “We require probably about $250-300 million,” Browne told TIME in an interview in Antigua. “The extent of the damage is beyond the means of these islands …global human cooperation is an absolute necessity.”

Browne also is being blunt about demanding help from wealthy nations like the U.S. Browne backed the call by British billionaire Richard Branson—whose Necker Island resort was destroyed by the storm—for a “Marshall Plan” to help revitalize and rebuild the areas stricken by Hurricane Irma in the Caribbean. “This is not a situation in which Caribbean islands are going cap in hand or with a begging bowl to wealthy countries. They have an obligation to assist [small developing islands], especially as heavy polluters. They have to help us because they are contributing to the issue as heavy polluters,” Browne told TIME.

Browne’s government has worked towards upgrading the island’s building codes, by creating concrete homes with concrete roofs that have deep foundations, which go up to 40 feet into the bedrock. He promises that international aid will be used to reinforce the island’s ability to cope with the huge hurricanes that are sure to develop in coming years.

“What my government doesn’t want is for any donor in the public or private institutions to accuse us for not being getting value in money,” he told TIME. “So if we have a similar storm in two or seven years from now, we can say: ‘hey, now look—we have a more resilient country that can stand up to the effects of climate change.'”

Here’s the problem: Barbuda is a coral reef island sitting on porous limestone just a few feet above sea level (there are some hills in one corner of the island that rise to 125 feet, but the majority of the island is very flat, with many lagoons in the northwest corner). Barbuda also has few natural barriers to break the impact of the winds.

Here’s the bigger problem: the waters surrounding Barbuda are going to rise by more than 10 feet within the next 40 years, according to a consensus of climate scientists.

Politicians who still tilt towards the denial side of the climate-change issue are saying this week that the immediate aftermath of two of the most disastrous hurricanes in history is not the time to talk about factoring climate change into the rebuilding equation. If not now, when?

We soon will need to decide which of the following options makes more sense: to spend $300 million to rebuild an island that is largely going to disappear (probably well before the end of this century), or to spend a fraction of that to relocate the 1,800 residents of Barbuda to another country with higher ground?