Are you a city in North America with a highly diverse and well-educated population of more than a million residents, on-site access to mass transit, within two miles of a major highway and less than 45 minutes from an international airport, with world-class fiber-optic Internet infrastructure, an uninterrupted cellular network and a panoply of recreational and cultural amenities? Can you brew multiple permutations of dark-roast coffee for up to 50,000 workers on a single coffee break? 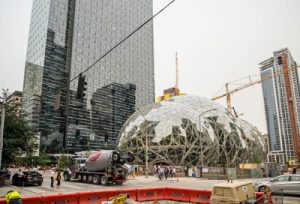 And, lest we forget, are your city fathers prepared to fork over a king’s ransom in financial incentives and other inducements?

Then you may be a frontrunner for what is shaping up to be the Deal of the Decade, Amazon’s second corporate headquarters in North America. The winning location for a $5-billion project (creating 50,000 new jobs) the tech behemoth is calling HQ2 will be chosen next year.

Tech giants usually have been ultra-discrete (another way to put it is secrecy bordering on paranoia) about the site-selection process for their major projects in recent years. Here’s a memorable example: even after Apple chose an Arizona site for its first U.S. manufacturing facility a few years ago, the company steadfastly refused to divulge any information about what it planned to make in the new plant (which turned out to be display screens for smartphones).

In all sectors, the trajectory of major projects tends to follow a similar path: early reports of the company’s plans give the broad outlines of the undertaking, but the initial stages of the site-selection process take place in the shadows, as corporate site selectors quietly winnow dozens of potential locations into an A-list of contenders. The real action in the bidding doesn’t heat up until the search has been narrowed to a handful of finalists.

But Amazon boss Jeff Bezos has never been one to shy away from unveiling his ultra-ambitious plans on a global stage. Thus came the unusual announcement this week that Amazon is soliciting bids from every major city in North America that thinks it has the moxie to land HQ2. The company posted a highly detailed RFP and invited all comers to submit their bids by October 19.

You’ll be forgiven if you’re wondering why a company that already has a humongous North American headquarters in Seattle needs another one. Over the past two decades, as Amazon has exponentially expanded its ecommerce and distribution tentacles and raced to the top echelon of Fortune 500 giants, Seattle has morphed into its company town. Amazon is by far Seattle’s largest employer, occupying an estimated 19 percent of the office space in Washington’s largest city. [The abstract public artwork that adorns the Seattle HQ (okay, let’s start referring to it as HQ1)–exceptionally large glass spheres–is still under construction.]

Our first guess imagined that Bezos, who expects to become a regular commuter to outer space on his Blue Origin rockets in coming years, wants to lift off on the West Coast and land on the East Coast just a hop, skip and a jump away from one of the CEO suites at either HQ. But the primary motivation for HQ2 most likely is a bit more down to earth: Amazon apparently has outgrown Seattle.

That’s right, the company is so large it’s looking for a second city to call home, provided that city can meet Amazon’s specs for the type of metropolis that meets its needs, specs that upon close examination sound like a really good fit for, well, Seattle.

According to a report in The New York Times, Amazon execs have privately been expressing concerns that the company’s giant footprint in Seattle is beginning to generate some negative consequences, including skyrocketing housing prices, an intense competition for highly skilled workers and the daily traffic jams that are the norm in larger metro areas. Recent actions by Seattle lawmakers also indicate that the tech giant may have worn out its welcome: the City Council recently unanimously approved a tax on individual income over $250,000 (and $500,000 for couples) after local lawmakers blamed Amazon for a lack of affordable housing in the region, among other complaints.

The Times reports that expletive-laced graffiti aimed at Jeff Bezos has been spotted on city underpasses. This may explain why Amazon’s RFP says the company is looking for “a stable and business friendly” environment, which is what you want after you destabilize your current environment and generate hostility.

But while Amazon’s relationship with Seattle may be fraying, the company says it has no plans to leave the city where it employs more than 40,000 people; Amazon says it is moving ahead with plans to add up to 6,000 people to its Seattle workforce.

Memo to HQ2 applicants: don’t forget to include granular statistics that define the level of traffic congestion in your location on the RFP submission. When you get to the amenities section, keep in mind that HQ1 in Seattle has more than 24 coffee shops on the premises (anyone who doesn’t believe a corporate culture can consume that much caffeine has never taken a close look at Jeff Bezos’ bulging eyes). City financial planners should pay special attention to the RFP admonishment that “special incentives legislation” may be needed to land the mega-project.

We don’t doubt that Amazon needs room to grow, but this week’s mega-announcement also may have a political side to it. President Trump has made Amazon one of his favorite Twitter targets in recent weeks, accusing the ecommerce giant of crushing retailers and killing American jobs. [Editor’s Note: Jeff Bezos owns The Washington Post, which has been detonating almost daily bombshells about the Russia scandal.] A $5-billion project that promises to create 50,000 jobs is a potent counterpunch.

Within hours of Amazon’s RFP announcement, cities, states and provinces all over the continent let it be known that they’re ready to reach for the big prize. HQ2 is shaping up to be the biggest economic development competition we’ve ever seen.

Pull up a chair and enjoy the show.