By Jack Rogers
From the July/August 2017 Issue

If Texas was a country, it would have the tenth-largest economy among nations. A business-friendly climate—TX, which has no corporate or personal income taxes, is the top-ranked state for Best Business Climate in our 2017 Rankings Report—as well as a highly skilled workforce, easy access to global markets and robust infrastructure has attracted the headquarters of 50 Fortune 500 companies to the Lone Star State. 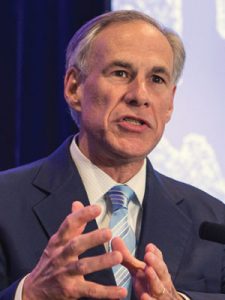 For Gov. Greg Abbott, one of the biggest selling points for Texas is what the governor likes to call “economic liberty.” In an exclusive interview with BF, Abbott defined his governing philosophy for stimulating economic development.

“Economic liberty is why Texas leads in job creation and in corporate expansions and relocations,” Abbott explained. “Restrained government, lower taxes, smarter regulations, right-to-work laws and litigation reform—these are the pro-growth economic policies that help free enterprise flourish and that attract businesses to Texas from states that overtax and overregulate.” 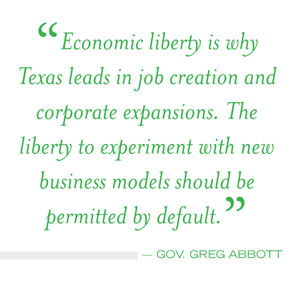 CEOs who relocate to Texas cite the differences as “night and day” when it comes to the improved quality of life and good schools, along with the job-ready workforce, Abbott told BF.

Texas doesn’t restrict its welcome mat to large corporations. “We’re also no. 1 for small-business friendliness,” Abbott said. “With the fastest-growing annualized real GDP in the nation for the fourth quarter of 2016, we are keeping our state strong and prosperous with a budget below the state’s spending limit to keep operating costs for businesses low while preserving a high quality of life and maintaining the state’s AAA credit rating.”

Abbott offers a Texas-sized howdy to new business models: “The liberty to experiment with new business models should be permitted by default,” the governor told us. “Across industries, we need to remove barriers to entry, encourage competition, enact consistent consumer safety regulations and then empower consumers to choose.”

Texas has been the nation’s leading state for exports for more than a decade, and it is moving up the ranks of top destinations for foreign direct investment. The Governor’s Office, along with other statewide partners, recently led a trade mission to China, which has become a major trading partner of TX.

Abbott told us that Texas leads the nation in jobs created by foreign investment over a two-year period—jobs that would not have been created without the more than 1,300 international businesses operating in TX. China has become the second-largest import source country for TX, with more than 150 Chinese companies operating in the state. San Antonio and Houston are among the top 10 U.S. cities for Chinese FDI.

“The recent trade mission to Shanghai was very successful, and we enjoyed the opportunity to showcase our state’s many economic strengths for hundreds of industry representatives from across the globe,” Abbott said. “We saw a great level of interest from Chinese companies seeking to invest in real estate, renewable energy, manufacturing, technology and a host of other industries that are booming in the Lone Star State. Likewise, we anticipate that China will soon be a new market for Texas exports, and we hope to move forward in forging new partnerships in those industries as well.”

In total, Abbott said, self-employed entrepreneurs and small businesses now comprise 98.6 percent of all businesses in Texas and create an annual economic impact of over $1 trillion.

Texas has offered an impressive bounty of incentives to entrepreneurs: TX has slashed the franchise tax to spur job creation, removed licensing requirements for over 600,000 professionals and reined in burdensome state regulations to allow free enterprise to flourish.

Gov. Abbott expressed confidence that Texas, already home to some of the top international companies in the cybersecurity industry, will expand its top-tier position in this red-hot emerging growth sector. The governor sited San Antonio as a major cyber security hub, teeming with leading-edge programs undertaken in cooperation with U.S. military and intelligence assets. 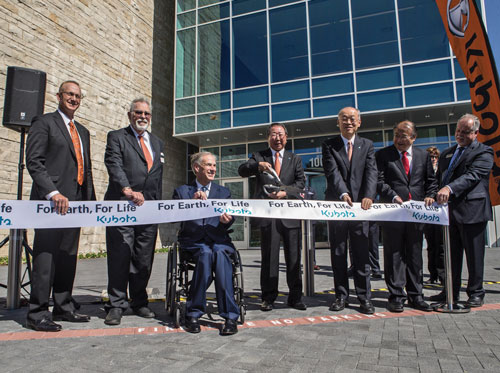 To meet the workforce training demand for this specialized field, 15 Texas colleges and universities are designated as Centers of Academic Excellence in Cyber Defense. Additionally, the University of Texas at San Antonio and Texas A&M University are among the five members of the National Cybersecurity Preparedness Consortium designed to address the nation’s gap in cyber-security preparedness training and technical assistance. San Antonio also is a CyberPatriot Center of Excellence, introducing high school and middle school students to cybersecurity careers.

By aggressively expanding its STEM-oriented educational resources, TX has established a solid foundation for providing a skilled workforce for high-tech industries. Texas ranks among the top three states for biotech doctorates and is second for engineering and electrical engineering doctorates.

One result is the formation of Texas Industry Cluster Innovative Academies, providing high school students with the opportunity to earn college credits, certifications and degrees as well as gain hands-on experience through internships and mentorships in high-demand and STEM-related fields. Funding from the Governor’s University Research Initiative also is helping to recruit even more Nobel laureates and National Academy members to teach in leading TX universities. Abbott has set ambitious goals for the 60x30TX higher education plan, including: 60 percent of Texans ages 25-34 having earned a college degree or postsecondary workforce certificate by 2030; and all graduates from public higher education institutions having completed programs with identified marketable skills.

TEXAS IS THE KING OF WIND POWER

Texas historically is known as the heart of U.S. production of oil and gas, but TX also has taken a commanding lead in a 21st-century energy source: wind power. TX has been BF’s top-ranked state for installed wind power capacity for several years.

Texas successfully executed its Competitive Renewable Energy Zone transmission plan, building a new $7-billion transmission grid to connect wind resources in the plains of West Texas and the northern Panhandle region to larger population centers throughout the state. Since the project was completed, TX wind-power capacity has expanded to more than 19,000 MW, which is more capacity than the next three states combined and nearly a quarter of the U.S. total.

“The state’s investment in adequate transmission capacity was vital as it provided access to wind generation in remote areas of Texas for customers hundreds of miles away in high-density population areas across the state,” Abbott told BF. “In addition, the unique presence of one electric grid for most of the state—the Electric Reliability Council of Texas region—creates an advantage over other states.

Recent projects that rely 100 percent on renewable energy include the Facebook data center under construction in Fort Worth. The city of Georgetown, TX is one of the first cities in America to be entirely powered by renewable energy. And with wind turbine technician now the fastest-growing job title in the U.S., the Wind Energy Technology program at Texas State Technical College in Sweetwater has doubled in size. In fact, demand is so high that students are often hired before graduation.

The Dallas-Fort Worth area has become one of the nation’s leading hubs for data centers. [Facebook recently announced plans to triple the size of its complex at AllianceTexas Business Park.] Tech giants like Apple, Oracle, Google and Microsoft are also expanding their corporate presence and jobs in Texas’ innovation corridor. “Lower energy costs, lower land costs and fewer land-use restrictions mean lower operating costs for tech businesses and a lower cost-of-living for [their] employees,” Abbott noted.

Texas has no intention of giving up its heavyweight championship belt in the oil and gas sector. Industry geologists now believe up to 75 billion barrels of black gold can be recovered by fracking in the Permian Basin, most of which resides in West Texas. New horizontal wells in the Basin are so productive they can withstand volatility in the global price of oil.

“Today, the Permian Basin is the fastest-growing oil basin in the world. It is currently home to about one-third of all active drilling rigs in the U.S., and Texas has almost half of all oil- and gas-related jobs in the country,” Abbott said. “To combat volatility in pricing, the industry has made often incredible strides at both reducing costs and increasing per-well recoveries. Those improvements have steadily lowered break-even price thresholds. As a result, rig counts are up, pipeline capacity is increasing and upgrades at our ports will allow for even larger tankers to support the growing market for energy exports.”

TEXAS AIMS FOR THE FINAL FRONTIER

Texas, home to the Johnson Space Center in Houston, always has been at the forefront of the U.S. space program. Since the first privately owned and operated rocket to reach space was launched from Matagorda Island in 1982, the Lone Star State also has been positioned to become the leading hub for commercial space launches.

Midland Air and Space Port is the first commercial airport to receive an FAA launch license. Houston Spaceport is also a FAA-licensed spaceport. And SpaceX is building the world’s first commercial launch site designed for orbital missions in the Boca Chica area of South Texas. The site’s southern, coastal location is uniquely advantageous for orbital space launches. It is as close to the equator as possible, while remaining distanced from populated areas. SpaceX South Texas will be optimized for commercial launches and will support launches to low-Earth and geostationary orbit.

Gov. Abbott summed up the Lone Star State’s skyrocketing aspirations: “Everything in Texas is bigger, including our dreams of traveling beyond the bounds of Earth.”