Trade representatives from the U.S., Canada and Mexico sat down this week in Washington to begin the arduous task of renegotiating the 24-year-old North American Free Trade Agreement. The process to revise NAFTA formally was activated by the United States in June after President Trump decided not to withdraw from the trade pact, which he had threatened to do soon after he took office in January. The negotiations to amend NAFTA are expected to take several months to complete. 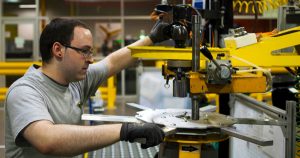 U.S. trade representative Robert Lighthizer opened the NAFTA talks by declaring that the free trade agreement has “fundamentally failed many, many Americans and needs major improvement.” The representatives from Canada and Mexico presented a seemingly united front with statements expressing their shared opinion that NAFTA is not an unfair deal for the U.S. They both had stiff smiles on their faces, the kind you get when someone steps on your toes and you don’t want to embarrass them by yelping in pain.

Lighthizer’s strongest argument for revising NAFTA is the current imbalance of trade between the U.S. and its two NAFTA trading partners. In 2016, the U.S. ran up a NAFTA-related deficit of about $70 billion, roughly two-thirds of which came from trade with Mexico. The U.S. trade rep also is zeroing in on NAFTA-induced market and manufacturing shifts that have facilitated an influx of Canadian lumber into the U.S. and an exodus of U.S. auto assembly plants to Mexico, among other items on the down side of the ledger for the U.S., all of which Lighthizer says are costing U.S. workers their jobs.

Don’t expect our trade rep to say much about agriculture. NAFTA’s impact on trade in food crops between the three partners will give Mexico and Canada a strong counterargument to the premise that the NAFTA trading field is tilted against the United States. U.S. farmers have been the primary beneficiaries of NAFTA by a wide margin, running up huge trade surpluses against competing farmers north and south of the border. More than $16 billion worth of U.S. corn was exported to Mexico last year, part of a decades-long onslaught from America’s corn belt that has crushed corn production in Mexico, which relies primarily on small family farms.

A look at the overall surge in U.S. exports due to NAFTA also will be a counterpoint to the U.S. complaint that NAFTA has been a net negative for America. Canada and Mexico now are No. 2 and No. 3, respectively, on the list of America’s top global trading partners, trailing only China; annual trade between the U.S., Canada and Mexico exceeded $1.6 trillion in 2016. U.S. exports to Canada and Mexico in 2016 totaled about $600 billion, a figure that has grown exponentially in recent years. This burgeoning tide of U.S. exports, especially from the agriculture and livestock industries in more than a dozen states, enabled U.S. Commerce Secretary Wilbur Ross and U.S. Agriculture Secretary Sonny Perdue to persuade President Trump not to act on his threat to pull out of NAFTA.

In the upcoming negotiations, the U.S. will be on firmer ground when it seeks to remedy the imbalance caused by the low cost of labor in Mexico (one proposed solution is to set a minimum wage for all auto workers in North America, pegged to the UAW’s $15/hour benchmark); to impose uniform environmental standards on our trading partners; and to create guidelines for e-commerce throughout the hemisphere (a sector that didn’t exist when NAFTA was ratified in 1993). Don’t expect a big kerfuffle on these and other issues on America’s NAFTA agenda—the three partners reached preliminary agreements on most of them in the negotiations for the Trans-Pacific Partnership before the U.S. withdrew from TPP during President Trump’s first week in office.

The most interesting players to watch during the NAFTA talks—U.S. businesses—won’t have an official seat at the table, but America’s corporations may have a big say on whether the renegotiation produces a major revision or just a series of tweaks. According to recent reports, America’s corporations have been clearing their throats in the run-up to the NAFTA talks and stepping forward to defend (or at least limit revisions to) the trade pact. [Most of America’s unions want major revisions, but their clout in Washington is a shadow of what it was in 1993; as right-to-work laws have been adopted by a majority of U.S. states, union membership rolls have cratered].

A major makeover of NAFTA may be a non-starter because the original agreement has produced a game-changing shift in the way goods are produced in the U.S., Canada and Mexico: while the pact turbocharged trade between the three partners, it also created a truly hemispheric supply chain.

Major automakers have taken a lot of heat for moving some U.S. auto assembly facilities to Mexico, where auto workers are paid $10/hour to build vehicles that are shipped back to the U.S. for sale to the U.S. market. However, the parts for these vehicles—a multi-billion-dollar industry that supports hundreds of thousands of jobs throughout North America—are made in all three NAFTA nations and move back and forth across the U.S. border in a contiguous stream.

The hemispheric supply chain helps automakers hold down the cost of producing vehicles, enabling them to lower the sticker prices for consumers so these cars and trucks can compete in a global market. Automakers are warning that revising NAFTA to require a higher percentage of U.S.-made parts in vehicles built in North America (and sold in the U.S.) could wipe out their profit margins for smaller vehicles and force the auto giants to eliminate many of these models, reducing overall production and the employment associated with it.

The hemispheric supply chain has become an essential fact of life for many small businesses as well as major manufacturers. A recent report in The New York Times highlighted the dilemma faced by a small firm in Kentucky as it confronts the adjustments it may have to make in the wake of a major NAFTA rewrite.

An outfit in Lexington, KY that calls itself Big Ass Fans employs 700 workers to design and build premium ceiling fans (we’ll call them BFA, and we’ll stipulate here that the full moniker no doubt refers to the output of these hanging windmills, not the posteriors of target customers). The company has had great success producing high-quality American-made products for sale in a global market.

But BFA is worried about what may emerge from the NAFTA negotiations, particularly if revisions include new requirements that U.S. parts are used in the manufacturing of U.S. products or if mutual quotas are imposed on certain types of exports. BFA hasn’t been threatened by globalization—the company has found a way to thrive in a global market, in part by embracing the hemispheric supply chain facilitated by NAFTA: BFA imports the motors in its fans from Mexico; the two largest export destinations for its products are—you guessed it—Canada and Mexico.

Some U.S. industries that have been decimated by foreign imports in recent decades are embracing a NAFTA do-over regardless of whether Mexican or Canadian imports were the primary cause of their downfall. For example, the National Council of Textile Organizations is strongly supporting the U.S. push to renegotiate NAFTA, despite empirical data which shows that a flood of imports from China played a far greater role in depressing wage growth in the U.S. textile industry than a much more modest influx from Mexico.

It’s not a stretch to point out that many hard-core proponents of dismantling NAFTA are eyeing a much bigger goal: they’re hoping the NAFTA fight is the opening salvo in an across-the-board trade war that aims to resurrect a host of tariffs and other protectionist measures that were central to the bygone era of bilateral trade. Here’s another way to put it: they want to build a wall of tariffs and make Mexico, among other nations, pay for it.

But even some of the most vocal supporters of renegotiating NAFTA recognize that globalization is an historic shift that is accelerating rather than retreating. The U.S. can try to mitigate the impact of globalization on our industrial employment, but turning back the clock, trade-wise, to the days of Smoot-Hawley is not the remedy. [The Smoot-Hawley Tariff Act of 1930 drastically raised U.S. tariffs on more than 20,000 imported goods and is blamed by a consensus of economists for exacerbating the crushing impact of the Great Depression on U.S. employment].

When he testified in June to a congressional panel that oversees international trade, Auggie Tantillo, president of the National Council of Textile Organizations, declared that NAFTA “can be updated and improved to significantly enhance U.S. textile production, exports and employment.” But Tantillo also argued against reinstating tariffs and said the renegotiation of NAFTA “must not disrupt the high level of supply chain integration that exists today.”

Here’s hoping the three trade negotiators build upon the successes of the North American Free Trade Agreement and focus on reasonable adjustments to the pact which in turn will help businesses adjust to the paradigm of what is rapidly becoming a global supply chain, the essential component of the emerging global market of the 21st century.

[Editor’s Note: Since the temps are pushing 90 F. today, we’re going to take a break, get into our car (made by U.S. auto workers in Alabama for a conglomerate based in South Korea) and head over to the mall to purchase a lightweight cotton shirt. We’ll pick one with a ‘Made in the USA’ label, but we don’t mind if the cotton came from Egypt or Pakistan as long as the price of the garment is less than our monthly cable TV bill, which comes from a service provider based in New Jersey that is owned by an international communications giant based in France.

When we get home, we’ll turn on the TV and watch an American baseball game that features a pitcher from Japan trying to sneak a fastball past a slugger from Cuba. We’ll pop open a beverage from Mexico recommended by The Most Interesting Man in the World, a beer that was produced in a Mexican brewery originally built by Germans. We’ll tip the bottle to wash down a sandwich made from imported Estonian salami that we bought in an NJ deli run by Russian immigrants.

Our dessert will come from Hershey, PA, because, even in a global market, some things will never change.]