Home » Economic Development » The Editor's Blog » Ready or Not

Loyal readers of this space know we’ve been keeping our eyes peeled for important new developments regarding the rapidly approaching era of self-driving vehicles. 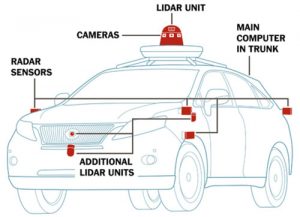 We’ve been expressing concern about the pell-mell rush to get fully autonomous vehicles onto America’s roads, wondering whether super-smart cars that drive themselves can be programmed to cope with the idiosyncrasies of human drivers, who tend to make impulsive moves that defy the logic found in the binary code that governs computer systems.

To put it in simpler terms, can cars driven by humans coexist with driverless cars on the same roads—or would it be safer to limit the introduction of driverless cars to roads and highways that already have been upgraded to connect with these vehicles (while the vehicles connect with each other) on a cloud-based smart transportation grid of the future? A smart-road grid already is being configured in Columbus, OH in a $50-million test program sponsored by the U.S. Department of Transportation.

Here’s an anthropological analogy: we now know that humans coexisted with Neanderthals for several thousand years, but that didn’t work out too well for the Neanderthals. In the age of self-driving cars, we would be the Neanderthals when it comes to operating motor vehicles.

We wish we could tell you that it’s feasible to postpone the introduction of driverless vehicles until we build a smart transportation grid loaded with embedded sensors that interact with every vehicle on the road, but it’s not. The 20th-century infrastructure we’re currently driving over desperately is in need of about $2-trillion worth of repairs, so the interactive transportation system of the 21st century is going to have to get at the end of the line for funding (which probably means it won’t be up and running before 2030).

Ready or not, driverless vehicles are coming soon to auto dealers near you. Major automakers, including Ford and Volvo, and leading tech giants like Google and Amazon are investing heavily to prepare for a rapid introduction of fully autonomous vehicles; self-driving cars and trucks could be on the market (aimed primarily at taxi and freight-hauling services) as early as 2019. Tesla founder Elon Musk is predicting that “almost all new cars made in the United States” will be fully autonomous within the next 10 years.

Here’s the good news: federal and state lawmakers have awakened to the urgent need for them to establish a regulatory framework for driverless vehicles, and they’re preparing to act.

Last week, a U.S. House Energy and Commerce subcommittee voted to advance a bill that would speed up the development of self-driving cars and establish a federal framework for their regulation. The bill, known as The Highly Automated Vehicle Testing and Deployment Act of 2017, is the first major federal effort to regulate autonomous vehicles; it would give the National Highway Traffic Safety Administration broad oversight of the self-driving car industry. The bill is on track to come up for a vote before the full House this fall.

Last month, a bipartisan group of U.S. senators said they were working on their own version of the House bill; the group indicated that their bill would “prioritize safety, fixing outdated rules and clarifying the role of federal and state governments” in regulating self-driving cars.

The rising tide of annual motor vehicle fatalities in the U.S. is a key driver of the efforts in Congress to regulate self-driving cars, which widely are viewed as a cure-all for car crashes. According to the National Highway Traffic Safety Administration, 94 percent of traffic deaths involve human error, including distracted driving and drunk driving. Unfortunately, high-tech is part of the problem as well as the potential solution: a significant portion of the sudden increase in distracted driving is being caused by the high-tech gear (like large touchscreens on dashboards) being offered as standard equipment in new cars, as well as the false sense of security that drivers get from new semi-autonomous features that permit them to take their hands off the wheel. [The major automakers shifted their product development plans from semi-autonomous vehicles to fully autonomous vehicles after studies revealed that driver-reaction times when retaking control of semi-autonomous vehicles are too slow to avoid deadly accidents; in some tests, drivers took up to 17 seconds to grab the wheel, during which a car driven at a speed of 60 mph can travel more than a quarter of a mile.]

Congress also is being motivated to embrace driverless vehicles by the specter of an erosion of America’s position as the world’s premier automotive manufacturing power if legal roadblocks to driverless cars cede leadership of the push for autonomous vehicles to overseas producers.

While Congress mulls new federal regulations, several states are introducing their own laws for self-driving cars. California’s Department of Motor Vehicles recently released a series of proposed rules, and the Golden State has begun a program to modify its roads to make them easier for the sensors in autonomous vehicles to analyze. Michigan passed a package of bills last year that made it easier for auto manufacturers to experiment with self-driving cars on public roads; Florida enacted a law that legalized fully autonomous cars (with no human operator behind the wheel).

Automakers and tech companies investing in self-driving technology are lobbying for a uniform set of federal standards to govern autonomous vehicles. Ford, Google, Uber, Lyft and Volvo recently formed the Self-Driving Coalition for Safer Streets, an industry group aiming for a clear set of national standards.

The House bill now under consideration also addresses cybersecurity risks that may arise if self-driving cars proliferate on roads that eventually will be connected to the cloud (and therefore may be susceptible to hacking). The House bill would require manufacturers of new autonomous systems to submit security plans for their self-driving cars. [It’s probably too late to prevent Putin from subverting the news stations on our Sirius XM car radios with propaganda beamed from fake news outlets in Moscow, so let’s all agree to draw the red line at who gets to control the traffic lights in Cleveland.]

So it’s reasonable to declare that the auto and tech industries are almost ready for the age of self-driving vehicles, and the government is getting ready.

But are we ready to climb into the passenger seats of robot vehicles? According to recent polling, not so much. A poll conducted earlier this year by AAA revealed that 78 percent of drivers in the United States are afraid to ride in a self-driving car, and 54 percent would feel less safe sharing the road with one.

Open the garage door, Hal. Hal, please open the garage door. I can’t do that, Dave. [Okay, we couldn’t resist an old movie reference, but remember that Stephen King novel about a car that develops a mind of its own and tries to kill its owner….].

Overcoming cultural shock may not be the biggest hurdle facing a rapid transition to driverless vehicles—the impact on workers who make their living by driving may prove to be a larger impediment. An estimated 1.7 million Americans drive long-haul trucks for a living, and another 1.7 million people drive taxis, buses and other commercial vehicles.

Here’s a reliable prediction: it’s going to be far easier to manufacture millions of fully autonomous vehicles to replace the current models driven by humans than it will be to replace up to four million jobs that will be rendered obsolete when the Driverless Age pulls up at our curb, honks its horn and tells us to get in.