The 1.3-mile-long ride through the rail tunnel under the Hudson River between Manhattan and New Jersey takes less than five minutes, which isn’t a large number of ticks on the clock. But if you measure the overall economic impact that depends on the people who trek by train under the river, you’ll have to add a few digits: as in $4.1 trillion. That’s trillion, with a T. 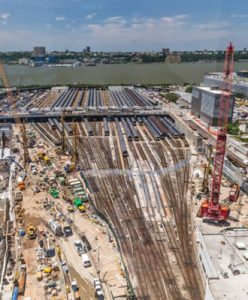 With so much at stake in the nation’s most-dynamic economic hub (the global financial capital), you’d think the people responsible for maintaining this vital transportation artery—the only rail tunnel connecting NYC and NJ—would make sure it’s always in tip-top shape. But you’d be wrong.

The rail tunnel under the Hudson River is more than 100 years old, it only has two tracks and it may collapse before you finish reading this.

The powers-that-be, who run the NY-NJ transportation system—also known as the Port Authority of New York and New Jersey—have been talking about replacing the Hudson rail tunnel for more than 50 years. But they’ve had other priorities for divvying up their enormous annual capital expense budget, which now tops $8 billion. That’s billion, with a B.

Priorities like fish-processing plants in Brooklyn, and a $4-billion marble-encased architectural marvel that sits atop the city’s 18th-busiest subway station at the World Trade Center, and a ferry service between Jersey City and the Atlantic Highlands on the Jersey Shore that receives a $7,200 daily subsidy from the PA of NY/NJ to carry 154 commuters who only pay $12 for a ticket.

The PA of NY/NJ was the brainchild of master builder Robert Moses, who used a tidal wave of tolls to finance the creation of an epic empire of NY roads and parks in the mid-20th century. Moses ruled his empire like, well, Moses. He delivered the project commandments, and monumental edifices like the Triborough Bridge, the Long Island Expressway and Jones Beach came into being in record time. Moses parted the waters of Long Island Sound and let his people go (to the beach) on the Whitestone and Throgs Neck bridges.

But when Moses finally lost his grip on power (after he went a bridge too far and tried to put a highway through the middle of Soho), control of the PA of NY/NJ’s purse strings reverted to the governors of New York and New Jersey. The governors—every single one of them since Moses’ departure—have agreed that the annual dispensation of the PA’s moolah shouldn’t be burdened with anything as bothersome as public oversight.

So the billions and billions in the capital expense budgets of the PA of NY/NJ became the biggest political slush fund in the history of the known universe. Money that was supposed to be spent on transportation infrastructure got spent on other stuff, while the nation’s busiest train station (NYC’s Penn Station) has become a decrepit rat warren of broken tracks, the roof has started leaking on the nation’s busiest bus terminal (appropriately named for the Port Authority) and an impending rail disaster in the tunnel under the river looms larger with each passing day.

[The governors’ cozy arrangement for running the PA briefly was threatened after the Bridgegate scandal, when the legislatures of both states overwhelmingly passed comprehensive reforms. Gov. Cuomo and Gov. Christie met at a small restaurant in NJ, had a nice lunch and quietly announced over dessert that they were both vetoing the bill.]

In the midst of the Great Recession, the federal government made New York and New Jersey an offer that, the feds thought, they couldn’t refuse. The Obama Administration designated a new Hudson River rail tunnel as the crown jewel of the federal stimulus bill that was passed by Congress in 2009. About $6 billion in the American Recovery and Reconstruction Act was earmarked for the new Hudson tunnel, more than two-thirds of the estimated $7.7-billion cost of the project. All the two governors had to do was say yes.

But Gov. Christie said no. He said New Jersey was bearing too much of the balance of the cost on the project, which he complained was designed to New York’s specs (the original plan had the tunnel disgorging passengers at a new station under Macy’s in New York’s Herald Square). He said the overall cost of the project was grossly underestimated, predicting that NJ would get stuck with the bill for the cost overruns.

Christie also said there were more pressing transportation priorities in the Garden State, like rebuilding the Pulaski Skyway (the elevated highway immortalized in the opening credits of The Sopranos). Christie was right about the cost estimates for the tunnel (a self-fulfilling prophecy, since the eight-year delay has now increased the tunnel’s price tag to $13 billion), but he was really wrong about the priorities.

Two years after the NJ governor made his momentous decision to cancel the new Hudson rail tunnel (ignoring last-minute pleas from the U.S. Secretary of Transportation and NJ’s two U.S. senators, who came to Trenton to try to change Christie’s mind), Superstorm Sandy plowed up through New York’s harbor, its storm surge slamming into the ancient rail tunnel under the Hudson River. The storm surge weakened the tunnel’s concrete bench walls and drainage systems while damaging overhead wires and electrical systems in the nation’s busiest rail connection.

After Sandy passed through, railroad workers were able to pump the floodwater out of the 111-year-old tunnel, but they couldn’t repair the structural damage—because they can’t close the tunnel, not even for a day.  So now it’s a race against time.

There’s some good news this week: the 10-year project to replace the tunnel—the new name is Gateway Hudson River—finally may be about to commence, hopefully with a new (but much more modest) infusion of federal funds.

The draft text of the fiscal year 2018 U.S. Department of Transportation Appropriations Act includes $900 million in new funding for the Gateway Hudson River rail tunnel. The tunnel itself is still in the planning and design stage (an $86-million Environmental Impact Statement soon will receive a public hearing), but preliminary work to configure tracks for its proposed entrance and exit is nearing completion.

Gateway is more than a tunnel. The project envisions a comprehensive program of strategic rail infrastructure improvements designed to upgrade current services and create new capacity that will allow the doubling of passenger trains running under the Hudson River. The program will increase track, tunnel, bridge, and station capacity, eventually creating four mainline tracks between Newark, NJ, and Penn Station, New York, including the new, two-track Hudson River tunnel.

The program also includes updates to, and modernization of, existing infrastructure, such as the electrical system that supplies power to the roughly 450 weekday trains using this segment of the Northeast Corridor, and rebuilding and replacing the damaged components of the existing rail tunnel (its original name is the North River Tunnel).

Here’s hoping that the federal seed money to jumpstart the Gateway project survives the impending battle in Congress over the federal budget. The cost of doing nothing would far exceed the cost of repairing and augmenting the most vital transportation artery in the United States.