For the third consecutive year, San Francisco is the leading city in A.T. Kearney’s annual Global Cities Outlook. San Francisco landed the top spot on the list — which evaluates a city’s future potential — due to its status as a leader in patents per capita and high level of private investment and incubators. In the Global Cities Index — which examines the current performance of cities — New York regained the top spot from London.

“The Outlook and Index provide a compelling look at 128 of the world’s leading cities, as well as those that are poised to make a significant impact,” said Mike Hales, A.T. Kearney partner and co-leader of the study. “There were several geopolitical events this year that profoundly impacted cities around the world and that we anticipate will have a hand in shaping future rankings. These include the U.K.’s Brexit vote, elections in France and Germany, as well as the U.S. presidential and congressional elections. All are significant global players and merit close attention in the coming months. 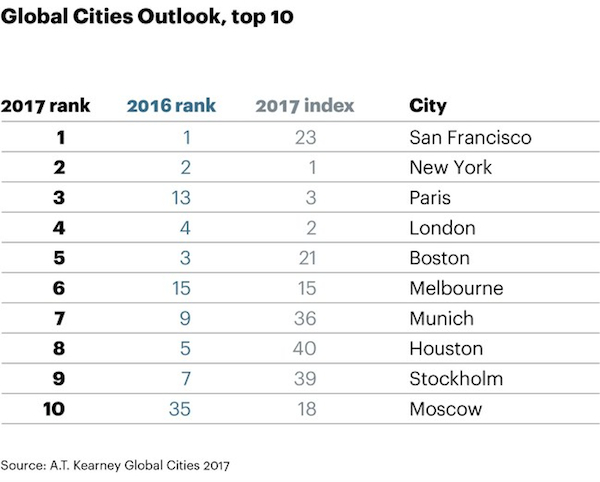 “Our historical database also gives a comprehensive look at which cities are wise investment decisions for corporate leaders, as well as those primed to make significant progress,” added Hales.

Over the past two years, Paris has continued to improve its standing in the Global Cities Outlook and is now challenging San Francisco and New York City, largely propelled by material increases in foreign direct investment (FDI) and moderate infrastructure improvements. In its third year, the Outlook evaluates the potential of 128 cities based on the rate of change in 13 leading metrics across four dimensions: personal well-being, economics, innovation, and governance. 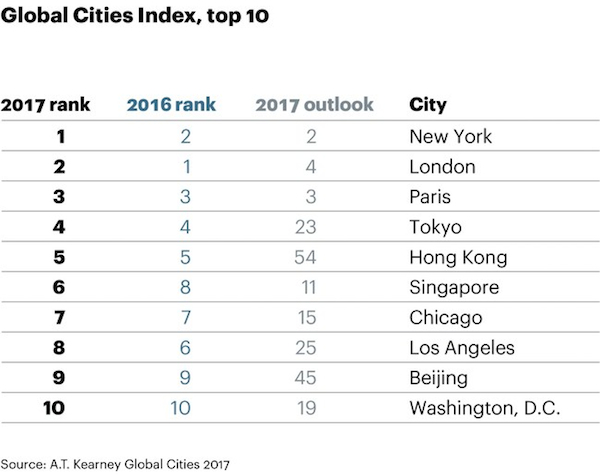 On the 2017 Global Cities Index, New York and London claim the number one and two spots, respectively, as the world’s most global cities. This is a reversal of last year’s findings. In its seventh year, the Index examines the current performance of cities based on 27 metrics spanning five critical dimensions: business activity, human capital, information exchange, cultural experience, and political engagement. The Index provides insights into the current global reach, performance, and level of development of the world’s largest cities.

In this year’s Index, as well as six of the previous seven Indexes, New York garnered the top spot. New York re-claimed the first-place ranking largely because of a strong performance in information exchange and a higher ranking than London in political engagement and leadership for economics. London has also experienced a more significant decrease in business activity since 2016.

Each year, A.T. Kearney identifies the “Global Elite” — cities that rank in the top 25 of both the Index and the Outlook. These cities not only are performing well today but also are positioning themselves for continued growth and global influence in the future. This year, 16 cities qualify, with London, New York City, and Paris all in the top 10 of both rankings.

“With several high-profile elections around the world in 2016 and early 2017, the prominence of political engagement remains high in determining which cities top the Index,” said Erik Peterson, partner with A.T. Kearney and managing director of the firm’s Global Business Policy Council. “Cities with a stable government and active citizenry are poised for continued growth. We have also seen that vibrant cultural institutions go hand-in-hand with a robust business community.”

A key theme in the Global Cities Index and Outlook this year was investment in developing start-up ecosystems, a factor whose importance will only grow in the future. Research that contributed to Global Cities 2017 revealed that leading start-up ecosystems could best be identified through four key factors: proximity to innovation partners, access to talent, supportive local regulations, and high-quality infrastructure. Examples of model cities for each factor are included in the Global Cities 2017 report.

“This year’s Global Cities Outlook underscores the importance of business growth potential. Start-up ecosystems were a large factor in determining the success of cities. Even large organizations are looking at the start-up scene as an important barometer for determining where to make investments, as well as where to place critical business facilities,” said Andrés Mendoza Peña, A.T. Kearney partner and co-author of the study.

Businesses should be prepared to face growing geopolitical and domestic pressure, specifically given the rise of populist politics in the U.S. and the U.K., according to A.T. Kearney. Large organizations can also use the Outlook and Index to evaluate newcomers in their strategic planning and identify cities that may function as high-growth investment opportunities and cost-efficient alternatives for headquarters, manufacturing hubs, and research centers.

Government leaders can use the findings in the Index and Outlook to assess their performance in each dimension, articulate specific strengths and opportunities, identify similar cities that could serve as role models, and set strategic goals for economic growth.

The full report is available online.