This week we got the grim news that drug overdoses are now the leading cause of death in the United States for people under the age of 50. The death toll from opioid addiction is far outpacing motor-vehicle fatalities (which also are heading for a record), and it’s exceeding the number of deaths from homicides involving gunshot wounds. At this rate, by the end of this year the annual body count from the drug scourge will surpass the total number of soldiers we lost during the decade-long war in Vietnam. 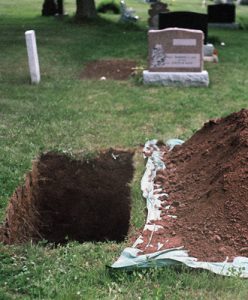 You read that right: the fatal overdose count in America is on track to exceed 60,000 in 2017. We wish we could tell you the carnage will plateau at that level, but the trajectory of the estimates from the Centers for Disease Control looks like a Saturn V launch. The estimated death toll for 2016, 59,000, represents a 19-percent increase over 2015’s total of 52,404. The largest demographic group for fatalities is middle-aged men; the East Coast and the Midwest have suffered the worst. The plague is expanding, exponentially.

A growing number of governors, most recently in Florida and Maryland, have declared a state of emergency over the opioid epidemic. A dozen more are getting ready to act as the dead bodies pile up in towns across America.

How bad is it? In February, one county in Ohio had to reach out to local funeral parlors to temporarily store bodies because the morgue in the county coroner’s office—still conducting autopsies on January’s toll of 145 overdose victims—no longer had room to take in the 18 people who succumbed to opioids on the first two days of February.

But this drug epidemic is far different than the previous outbreaks America has endured involving lethal narcotics, epidemics that featured needles, crack pipes and drugs sold by seedy characters in dark alleys. No, the people who ignited our current national tragedy walk around in white coats with stethoscopes hanging around their necks, or dress in suits and argue about legislation on the floor of the U.S. House of Representatives, or sit at polished mahogany tables in boardrooms and run Fortune 500 pharmaceutical and insurance companies.

Big Pharma cooked up the most dangerous opium-based medical recipes ever to come out of a lab, stuff that’s much more powerful than the morphine we give soldiers who step on IEDs or the street-grade heroin that’s traditionally been public enemy No. 1 in our endless war on drugs. These chemical compounds (and illicit synthetic imitations) can kill you with a single pill or a spritz from a nasal spray. The same software that’s probably used to name Japanese car models spit out some meaningless new words to brand these deadly concoctions. Words like oyxcontin, fentanyl. These are the kinds of painkillers an old-fashioned doctor (or an army medic) only would administer to a dying soldier or a terminally ill cancer patient to ease their hideous pain.

Our old general practitioner, the kindly soul who used to come to our house with a little black bag and get paid in cash, got run over by a Brinks truck decades ago. Ol’ Doc Sawbones was replaced by fast food-style medical clinics that take their puny cut from outrageous charges applied to the collective pool of our mortgage-sized health insurance premiums, a colossal money pie which is divvied up by the medical-industrial complex run by the nation’s largest insurance companies and their co-conspirators in the pharmaceutical industry.

The average doctor now is a “contract employee”—let’s call them insurance industry slaves—so they supplement their incomes with much larger payments—let’s call them bribes—from pharmaceutical companies to overprescribe whatever Big Pharma is pushing this season. That’s why every TV commercial touting a new drug ends with the words “Ask Your Doctor.”

[Speaking of TV commercials, did you see the one where the guy who runs a construction company is blabbing about the benefits of the new constipation medicine he’s taking? He’s just a regular guy with “OPC” (opioid-induced constipation) and he’s really happy that his doctor put him on these new meds that help him go to the bathroom—alleviating a side effect of the other thing his doctor did to him: get him addicted to opioids. Perhaps Mr. Regular Guy also can recommend a good vendor for leak-proof body bags.]

The high rollers in this death casino are the sleazebags who invented the greased palm. They ask us to vote for them every couple of years and we send them to Washington DC. When they get there, they spend 75 percent of their time across the street from the Capitol Building, in the cubicles of a faceless office building where they dial telephones from dawn to dusk, ringing up “donors” for “contributions.” (What, you didn’t know there’s actually a federal law against soliciting “donations” in the halls of Congress?)

A big chunk of these “political contributions”—let’s call them bribes—come from Big Pharma. These bags of cash make sure that Americans pay the highest prices in the world for prescription drugs. This money train also secured the federal approval that put lethal opioids like oxycontin and fentanyl on the market, where they can be obtained from your local pharmacy with a signature on a doctor’s pad. You can draw a straight line from the doctor’s pad to the drugstore to your medicine cabinet to your stomach and, eventually, to the traces found in the blood sample taken on the autopsy table.

No doubt your representative in Congress will want us to point out here that last year Congress toughened the rules on prescribing these deadly drugs, ordering the largest pharmacy chains to cross-check prescriptions and make sure customers aren’t “pharmacy shopping” to stock up on opioids by filling multiple prescriptions at the same time. You can precisely measure the effectiveness of this symbolic gesture by googling up the average retail price of oxycontin, which is about $75 for 60 pills, a charge that gets reduced to about $15 by the prescription drug plans that are part of our health insurance. So the average price of the pill that kills someone is about 25 cents. Opium is cheaper than a pack of bubble gum in today’s America because the supply is even greater than the demand, which is off the charts.

Predictably, the belated effort by the government to make it harder for people to load up on opioid prescriptions has spawned a thriving and deadly black market in illegally produced drugs that are being marketed on the streets as fentanyl, percocet, ocycodone and other powerful painkillers. Among the fentanyl substitutes now available on America’s streets is carfentanil, an elephant tranquilizer 5000 times stronger than heroin (a lethal dose is smaller than a few grains of salt).

Here’s the only piece of good news we can tell you about this subject. Let’s call it a glimmer of hope.

Last week, Ohio filed a lawsuit against the pharmaceutical industry over the opioid epidemic, accusing several major drug companies of conducting marketing campaigns that “misled doctors and patients about the danger of addiction and overdose.” OH Attorney General Mike DeWine charged in his suit that Big Pharma is spending “millions of dollars on promotional activities and materials that falsely deny or trivialize the risks of opioids while overstating the benefits of using them for chronic pain.”

“The companies provided funding to prominent doctors, medical societies and patient advocacy groups to win their support for the drugs’ use,” DeWine said in the lawsuit. “By 2012, opioid prescriptions in Ohio equaled 68 pills a year for every resident of the state, including children.” The population of Ohio was 11.6 million in 2012.

[Purdue Pharma, the maker of oxycontin, has released a statement responding to the OH litigation: “We share the attorney general’s concerns about the opioid crisis and we are committed to working collaboratively to find solutions.” The statement referred to the company as “an industry leader in the development of abuse-deterrent technology.”]

Ohio’s lawsuit is similar to one that was filed by Mississippi in 2015 and is still pending. The City of Chicago and counties in New York, California and West Virginia are preparing to start similar litigation against the Big Pharma titans. [West Virginia already went after major drug distributors and reached settlements that will pay the state tens of millions of dollars.]

State and local governments across the country are watching these lawsuits closely and considering their options. “We are in ongoing discussions with [state] attorneys general about what can only be described as a national epidemic,” a New York lawyer whose firm is advising states on possible opioid litigation told The New York Times.

Ohio’s lawsuit seeks to recover money the state has spent on opioid medications (through Medicaid and other programs) and on addition treatment. The OH lawsuit and other state legal actions against the drug giants are similar to the state lawsuits against the tobacco industry in the 1990s, which resulted in settlements totaling more than $200 billion.

But civil lawsuits for damages, even if they yield mega-millions settlements, don’t quite balance the scales of justice for the carnage that is unfolding from coast to coast in our nation. Criminal charges are in order, and no, “involuntary manslaughter” doesn’t cut the mustard.

[Editor’s Note: Shortly after we posted this, the Food and Drug Administration for the first time requested that a major drug maker pull a powerful opioid off the market. The request targets Opana ER, which is produced by Endo Pharmaceuticals. According to the FDA, abusers of Opana ER have been melting the pills down and injecting them, leading to outbreaks of HIV and Hepatitis C from shared needles, as well as fatal overdoses.]