By Sara Bongiorni
From the May/June 2017 Issue

For all its high-tech sheen, California’s Silicon Valley sprouted from a modest military investment in radio technology—and grew into a global technology capital. Louisiana could replicate that feat, with the catalyst being water. 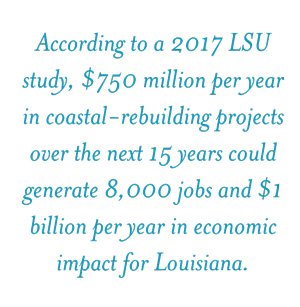 “The economic opportunities are remarkable,” said Justin Ehrenwerth, CEO of The Water Institute of the Gulf.

Massive public and private investment in the restoration of Louisiana’s coast—including a $50 billion master plan—has driven the emergence of a “water management industry,” a sector that will produce thousands of jobs in Louisiana and export technology across the nation and world.

The bid to save Louisiana’s fragile coast is giving scientists, engineers, architects and entrepreneurs unsurpassed know-how in protecting people, shores and economic infrastructure from rising seas and other global threats. According to a 2017 LSU study, $750 million per year in coastal-rebuilding projects over the next 15 years could generate 8,000 jobs and $1 billion per year in economic impact.

That investment also will build existing professional expertise and skilled labor to allow Louisiana firms to compete for large out-of-state contracts that will create additional jobs at home in Louisiana, the study concluded.

The 5-year-old Water Institute is itself an important element of the state’s growing water management sector. Its scientists—drawn from around the world—are modeling solutions for threatened ecosystems as varied as Vietnam’s Mekong Delta, the North Atlantic coast and the Great Lakes in the Upper Midwest.

Building upon work in The Netherlands, a world leader in water management for half-a-century, researchers at The Water Institute and universities across Louisiana are developing technology that can be applied to water threats worldwide. In fact, close collaboration with Dutch researchers is an important focus of the Baton Rouge research center.

“In Louisiana, we are doing science to save our coast, but what we learn from our research can be applied in so many places,” Ehrenwerth said. “There is such a need for the research and tools we are developing here.”

The state’s water management sector isn’t just about future potential. In 2015, about 44,000 people in South Louisiana’s coastal zone worked in water resources, according to the Data Center, a not-for-profit research and planning group. From 2010 to 2015 alone, the water sector added 9,494 jobs in the coastal zone, according to Data Center analysis.

Martin Ecosystems of Baton Rouge designs and manufactures plant-covered “islands” made from non-toxic recycled plastic bottles. Its floating, manmade islands can filter nitrates and other pollutants out of urban wastewater or buffer vulnerable coastline from the soil-eroding impact of waves.

Water Challenge competitors in 2016 included Caminada Bay of Grand Isle, which has developed a way to grow oysters in cage-like underwater structures that use nutrients found in coastal water currents.

New Orleans-based Tierra Resources is likewise a pioneer in shore protection (and a past Water Challenge winner). The firm developed a faster, less-expensive way to plant mangrove trees that function as marshland stabilizers. In 2015, it completed a three-year, mangrove-planting project with ConocoPhillips, which owns 638,000 acres of Gulf of Mexico marshland.

The pilot effort included the first-ever use of crop dusters to “air seed” young mangroves over Louisiana salt marshes. Tierra Resources also developed technology to identify coastal sites that are optimal for planting black mangroves, a native Louisiana species that is effective at storing carbon in its woody fibers.

“This is a way to protect our natural coast while also protecting billions of dollars in infrastructure,” said Sarah Mack, Tierra Resources founder and CEO.

Mack said the firm’s technology could be used in other coastal areas that are looking to mangroves for coastal protection, such as northern Australia.

Tierra Resources’ innovation reaches beyond technology per se. It developed a process for companies to purchase “credits” and offset the emission of carbon from their operations. By the company’s estimate, the sale of such credits could generate as much as $1.6 billion for additional coastal work.

Much of Louisiana’s water management prowess will spring from the 35-acre Water Campus, where the Baton Rouge research park will function as a living laboratory for solutions that can save coasts and protect their 2 billion inhabitants worldwide.

In addition to seeing the development of 1.8 million square feet of research and commercial office space, Water Campus visitors will be able to walk out onto the Mississippi River via a transformed, former municipal dock. That educational tourism attraction, opening in December 2017, will be home to The Water Institute of the Gulf and a companion center.

“The Center for Coastal & Deltaic Solutions will propel Louisiana onto the cutting-edge of coastal protection innovation, with Baton Rouge serving as a thriving landmark for major business and restoration projects,” said President and CEO John Davies of the Baton Rouge Area Foundation, a founding Water Campus partner.