China was the top country of origin for both buying and selling commercial real estate in 2016, and Florida was the top destination of choice for international clients, according to the new 2017 Commercial Real Estate International Business Trends survey by the National Association of Realtors® (NAR). The survey analyzed cross-border commercial real estate transactions made by Realtors® during 2016. 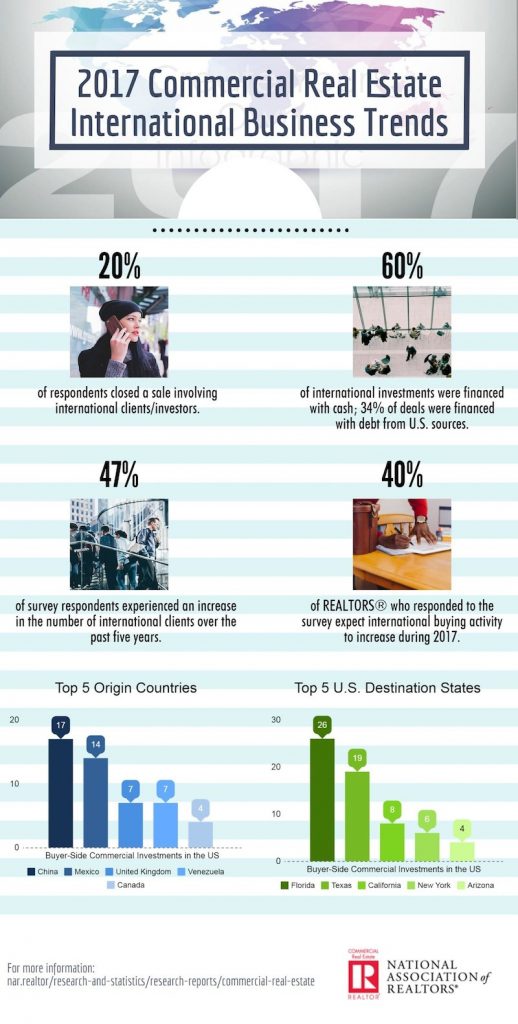 Most Realtors who specialize in commercial real estate reside in smaller commercial markets where the typical deal is less than $2.5 million. One-fifth of those surveyed closed a sale with an international client in 2016, and as foreign investors flock to smaller-sized commercial properties in secondary and tertiary markets, many are confident that increased sales and leasing activity will occur in 2017.

The appetite for U.S. commercial real estate property was strong from foreigners last year and shows little signs of slowing in 2017, according to Lawrence Yun, NAR chief economist.

“Multiple years of steady job growth and the strengthening U.S. economy — albeit at a modest pace — makes commercial property a safe bet for global investors looking to diversify their portfolios and generate returns outside their country of origin,” said Yun. “While Class A asset prices in many large markets have surpassed pre-crisis levels, Realtors in many middle-tier and smaller markets stand to benefit from the increased interest from foreign and domestic commercial property investors.

“Forty percent of Realtors expect an increase in foreign buying clients this year,” he added. “The healthy labor markets and lower property prices in smaller markets are poised to make up a larger share of activity.”

Additionally, 22 percent of Realtors said they completed a lease agreement on behalf of a foreign client. The median gross lease value for international lease transactions was $105,000, with most space typically under 2,500-square-feet.

Nearly two-thirds of commercial foreign buyer and seller clients were non-resident foreigners. The top countries of origin for buyers were China (17 percent), Mexico (14 percent) and the United Kingdom and Venezuela (both at 7 percent), while sellers were typically from China (17 percent) or Brazil, Canada, France and Mexico (all at 10 percent).

Florida and Texas were the top two states where foreigners purchased and sold commercial property last year, with California being the third most popular buyer destination and Michigan ranking as the third top state where foreigners sold real estate.

An overwhelming majority of buyers either purchased commercial space for investment purposes or acquired it for business use.

“Nearly half of Realtors reported that they experienced a greater number of international clients looking to buy commercial space over the past five years,” said Yun. “Economic expansion has slowly chugged along since the downturn, but in comparison to the rest of the world, the U.S. remains one of the most attractive and safest bets for investors. There’s little evidence this will change anytime soon.”