The guys hawking “refurbished” Rolex watches in Times Square probably don’t know it, but the U.S. Supreme Court apparently has their back. 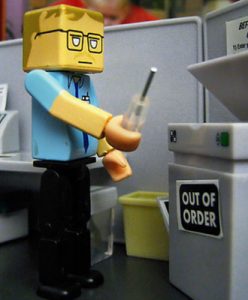 The Supremes produced a little-noticed ruling with potentially wide implications this week in a case involving the ubiquitous toner cartridges that are consumed by our office printers (you know, the ones that always run out of ink when you need to print a critical document two minutes before you’re supposed to start your summer vacation).

It seemed like a routine patent-infringement case as it made its way up the federal courts. In the last stop before the Supreme Court, the U.S. Court of Appeals for the Federal Circuit in Washington, DC ruled in favor of Lexmark, accepting the company’s argument that its patents had been violated both domestically and internationally by Impression Products. The appeals court said the conditions Lexmark placed on the sale of its cartridges could be enforced as a matter of patent law in the U.S.

But then the nine justices at the nation’s highest court abruptly decided to strike a blow for consumers everywhere. In a unanimous decision written by Chief Justice John Roberts, the court ruled that once you buy somebody’s product, you can do whatever you want with it. Roberts invoked a doctrine known as “patent exhaustion.”

“The purchaser and all subsequent owners are free to use or resell the product just like any other item of personal property, without fear of an infringement lawsuit,” Roberts wrote. Legal scholars said the ruling not only will protect resellers from patent infringement claims, it also will prevent manufacturers from forcing consumers to buy supplies only from the original sources.

To explain the logic of the ruling, the Chief Justice of the United States reached for a metaphor of cartoon simplicity: he said that refilling a toner cartridge and selling it like original equipment is the equivalent of selling a used car.

Roberts didn’t stop there. Nothing burnishes a judicial legacy like declaring your ruling not only applies to the United States but to any similar transaction in the entire world. So, based on the court’s ruling, if Lexmark sells its cartridges to a developing market—say Vietnam—at a lower price, now the Vietnamese can print out a copy of the purchase receipt, top off the toner cartridge with a few drops of ink and resell the units in the U.S. market at a lower price than Lexmark. Should do wonders for our balance of trade. [Justice Ruth Bader Ginsburg dissented from this part of the ruling. “Patent law is territorial,” she noted. “A foreign sale, I would hold, does not exhaust a U.S. inventor’s U.S. patent rights.”]

We’re not suggesting that the refurbishing and resale of toner cartridges automatically is a patent infringement, but it seems to have violated Lexmark’s purchase agreements with its customers. A narrowly written decision that nudged the plaintiff into going back to square one and basing its complaint on different grounds (seeking a royalty or damages) would have sufficed. But we suspect that Chief Justice Roberts, sensing an ideological opening in the space between the Court’s liberals (who are happy to rule on the side of consumers) and its conservatives (who tend to favor laissez faire capitalism), assigned himself the task of writing the decision so he could drive an 18-wheeler through this gap.

We know what you’re thinking. Inkjet printer ink already is more expensive than the best Champagne (it can cost up to $75 an ounce). Why should we have to spend $140 for a toner cartridge every time we run out?

But what if you can’t tell the real thing from Memorex? [Editor’s Note: that’s a line from a very old TV commercial from a different century.]

Under the High Court’s ruling, what’s to prevent us from buying a fleet of BMWs at 10 percent off the list price, driving them to a parking lot across the street from the authorized dealer, topping off the gas tank and selling them as new cars for five percent less than BMW is getting from its individual customers? If a toner can’t run without ink and a car can’t run without gas, what’s the difference? When we hand you the keys to a shiny 7 Series vehicle with less than 30 miles on the odometer, are you going to care that the sign over the lot doesn’t say BMW?

Can we also buy 10,000 packages of Gillette’s expensive, five-blade battery-powered razors at a wholesale discount, shave a peach with each one, repackage them under our own brand and sell them as new for a lower retail price?

Legal scholars believe the Supreme Court’s decision will dramatically impact the import and resale of products like smartphones and name-brand drugs. Costco, which filed an amicus brief siding with Impression Products, reportedly is gearing up to buy high-tech goods at the cheapest price it can find worldwide, bring them to the U.S. and resell them to customers. Semiconductor chip giant Intel also weighed in for the West Virginia company, telling the court that patent law “should not be used to undermine an interconnected global market.”

That sound of laughter you’re hearing is coming from China, where tech companies have turbocharged their growth by trampling on intellectual property rights and creating home-grown versions of Google, Amazon and eBay, with the assistance of a government that restricts access for foreign companies to its market.

Clean up in aisle 5, Justice Roberts.

Does patent infringement stop at the border if the product is purchased overseas?