By Jack Rogers
From the March/April 2017 Issue

Louisiana’s chief executive inherited some daunting challenges, including a few left over from his predecessor and some fresh wallops delivered by Mother Nature. But whether it’s a nagging budget shortfall or record flooding, Gov. John Bel Edwards has proven he can walk and chew gum at the same time, and then some. While putting his state on a sound fiscal footing and shoring up its disaster defenses, Gov. Edwards hasn’t lost a step in his aggressive effort to position Louisiana as a leader in 21st-century growth sectors. In fact, he’s made some huge leaps in forward progress. 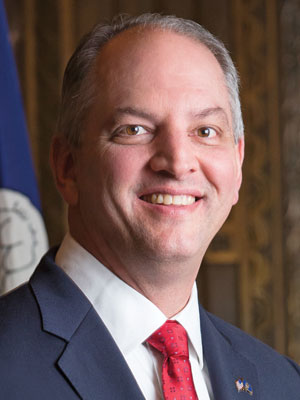 In February 2016, the Chevron-owned tanker Asia Vision was fully loaded with LNG at Cheniere’s massive Sabine Pass liquefaction and export facility in Cameron Parish. The shipment—the first LNG cargo exported from the U.S.—was delivered to the Bahia LNG terminal of Brazil’s Petrobras, launching what is expected to be a new era in global LNG trade [industry experts predict the U.S. will be among the world’s top three exporters of LNG by 2020].

Cheniere is building liquefaction and export facilities at its existing import terminal along the Sabine River on the border between Texas and Louisiana. The company plans to construct up to six liquefaction trains, each of which will have a nominal production capacity of about 4.5 million metric tons per year of LNG. 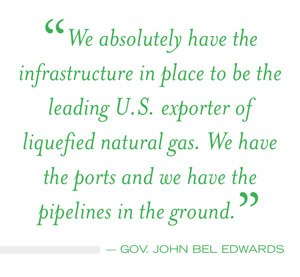 Louisiana, with the nation’s most-extensive pipeline network and its busiest ports, is poised to become a global hub for LNG exports. Edwards noted that Louisiana already has more than a dozen active pipelines that make it the central hub for moving natural gas to destinations all over North America.

“We have the deepwater ports [and] we have the pipelines in the ground. They’ve been shipping gas to the north and the west, but through re-engineering these pipes can supply all of the gas they need down on the coast [for exports],” the governor told us.

Energy industry giants from around the world are queuing up to build huge new LNG facilities on Louisiana’s Gulf Coast. “From Cameron Parish in the southwest of our state to Plaquemines Parish in the far southeast, we have investments in the tens of billions of dollars that are coming on line,” Edwards said. “We believe we’re well positioned going forward for many, many years to come.”

Edwards told BF he expects four more multi-billion-dollar gas liquefaction facilities on the scale of Sabine Pass to come on line in Louisiana by 2021, adding another 9.2 billion cubic feet per day of LNG capacity. The LNG boom is being fueled by historically low prices for natural gas due to an abundant supply that is being extracted from shale-gas deposits across the U.S. using horizontal fracturing (fracking) drilling rigs.

Edwards also said he expects the U.S. to become the LNG supplier-of-choice for several overseas markets, including Europe, which currently rely on natural gas shipments from Russia. “A lot of consumers of LNG have been buying their energy from sources that aren’t quite as stable and predictable as we are,” the governor noted.

AIMING TO BE NO. 1 IN CYBERSECURITY

Louisiana also has established a leadership position in one of the hottest new growth sectors: cybersecurity.

Already up and running is the $107-million Cyber Innovation Center (CIC), which will anchor the 3,000-acre National Cyber Research Park (NCRP) in Shreveport-Bossier City. The Cyber Innovation Center received funding from the U.S. Department of Defense and the Department of Homeland Security, which wanted a leading cybersecurity research hub near the U.S. Air Force’s Global Strike Command headquarters.

“The National Cyber Research Park is adjacent to Barksdale Air Force Base, which is home to a four-star nuclear command, so cyber is a natural fit in that area,” Edwards told BF.

With full access to Louisiana’s university system and a location in proximity to some critical military installations, the NCRP will exponentially expand Louisiana’s already impressive head start in establishing a fully integrated national hub for cybersecurity.

“We have all of the state’s universities, especially those along the I-20 corridor and Louisiana Tech, really working very closely with the Cyber Innovation Center in Bossier City,” Edwards said.

“It’s computer science and electrical engineering with a national security underpinning,” Spohn said. “The CIC partners with Louisiana Tech University in advancing research by connecting federal agencies with investigators who are conducting a variety of relevant cyber research [projects]. Louisiana Tech University is a Center of Academic Excellence for the National Security Agency.”

In addition to cyber engineering and information assurance, Spohn said relevant research topics include cyber policy and strategy, electronics shielding, data analytics and multi-sensor data fusion, micro- and nanotechnology, underground infrastructure and advanced communications. Skills critical to cybersecurity range from an understanding of software and hardware, along with networking and programming, and an understanding of the problem in the context of policy, law and ethics.

Gov. Edwards told BF that Louisiana’s push to develop a cybersecurity workforce isn’t limited to its universities. “There’s some really exciting research in cybersecurity going on in our universities, but we’re also pushing to stimulate interest in the cyber world among our high school and middle school students,” he said.

As cybersecurity moves to the top of U.S. national security concerns, the potential for growth in the emerging cybersecurity sector seems unlimited. [In an interview last fall, Louisiana Economic Development Secretary Don Pierson estimated that the cybersecurity industry eventually will create more than 1 million jobs in the U.S.]

Gov. Edwards told BF cybersecurity was a prime topic of discussion at this month’s National Governors Association meeting in Washington. “We spent an awful lot of time talking about cybersecurity and cyber research, and how this is critically important not just for defense but also for private enterprise,” Edwards said.

As a state with a significant number of military installations, Louisiana is applying as well as developing new cybersecurity measures. “We go through exercises where we simulate cyber attacks, sometimes as stand-alones and sometimes in conjunction with a natural disaster,” Edwards said.

“I’ve sat through three secret briefings with the FBI on cybersecurity. It is chilling what is going on out there and what the capabilities are. The bad guys are very creative people. It’s something we have to prepare for,” he added.

Edwards said the U.S. Department of Defense is planning to invest heavily in cybersecurity. Louisiana’s National Guard is in the running to lead cybersecurity teams in Baton Rouge and Bossier City, he said, and the state may be designated to host a DOD headquarters for cybersecurity.

Even before President Obama’s restoration of diplomatic ties with Cuba in December 2015 (after a 50-year hiatus during the Cold War), Louisiana was pushing the envelope to expand trade with the island nation.

“Over the last 10 years, we’ve led the nation by far in the amount of trade we’re doing with Cuba, but there are still rules in place that keep that amount low,” Edwards said.

Under the economic embargo the U.S. imposed on Cuba in 1959, which is still in effect, business deals in Cuba still require pre-payment in full or financing through a third party, and a vessel that has docked in a Cuban port is prevented from visiting an American port for 180 days, Edwards explained.

After the American flag was raised again over the U.S. embassy in Havana (by the same soldiers who had taken it down 50 years earlier), Louisiana’s state Legislature formally asked the governor to explore ways to restore Louisiana’s historic relationship with Cuba, which includes cultural ties that go back several hundred years, and to expand trade and business opportunities that easily can be serviced by the proximity of Cuba’s ports to New Orleans.

Gov. Edwards led a trade mission to Cuba in October that resulted in the signing of Memorandums of Understanding (the precursor to trade agreements) between the state’s ports and Cuban ports, and between Cuban ports and LA’s commissioner of agriculture.

Edwards candidly told BF he is concerned about early signals from the new administration in Washington that the opening to Cuba might be halted or rolled back. “I do have some concerns because it seemed like we were on a very clear trajectory as a nation to move forward in terms of normalizing relations and trade over time with Cuba,” he said. “There are so many areas in which [normalization] would be mutually beneficial.”

Edwards told BF he is optimistic that ultimately the trend toward stronger ties between the U.S. and Cuba will prevail. The governor expressed confidence that Louisiana would continue to lead the way in building renewed trade with our hemispheric neighbor 90 miles south of Florida.

We asked Gov. Edwards to specify a Louisiana export that would thrive if full trade is permitted to resume between the United States and Cuba. His answer may surprise you: Cuba needs better rice for its rice-centric cuisine.

“They’re getting their rice all the way from Vietnam and it’s an inferior grade of rice,” Edwards said. “It takes 30 days to get there and we could get [our rice] there in a week. Our rice is the best rice in the world, but they can’t get it because they still have to prepay in full.”

While it may take a bit more time for Louisiana to take full advantage of its unquestioned superiority in gumbo grain in the expansion of trade with Cuba, Gov. Edwards let us know he’s preparing to deploy another Louisiana specialty to amplify his state’s support for the opening to Cuba: the New Orleans Jazz and Heritage Festival this year will be featuring Cuban jazz.