Last week, the temperature hit 73 degrees in Boston, the warmest February 24 ever recorded in Beantown. Folks were strolling across Boston Common in T-shirts. Local TV outlets had reporters rounding up happy-talk interviews with people out catching summer rays of sunshine in the middle of the winter. 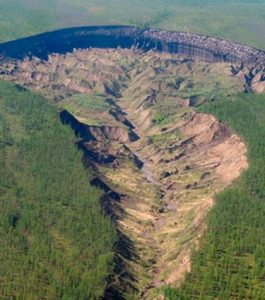 Nobody talked about the likelihood that, in 50 years or less, a significant portion of Boston could be under water.

At the same time, in Siberia, a gargantuan crater known to locals as the “doorway to the underworld” or “Hellmouth” continued to unveil its hideous visage in the midst of the melting tundra. The Batgaika crater in the Siberian region of Yakutia is just one of a growing number of pits collapsing as the permafrost turns to slush across northern Russia. The same phenomenon is happening across northern Canada.

Geologists and climate scientists have flocked to Hellmouth to study deep layers that are emerging as the bottom of the crater descends, revealing 200,000 years of geological history. The half-mile-wide, 275-foot-deep crater (which is widening at a rate of 30 to 100 feet per year as the ice around its edges melts) has offered up buried animal carcasses and portions of petrified forests. The crater thus far has coughed up the remains of extinct mammoths, musk ox and a 4,400-year-old horse.

The emerging ancient zoo of dead animals is not the main attraction to the scientists gathered at Hellmouth. They’re most interested in the immense amount of historical climate data that can be gleaned from the stratified layers of the crater’s sides. A study recently published in the science journal Quarternary Research says the results reveal gradual changes in climate stretching over tens of thousands of years in Yakutia. The region slowly shifted from dense forest to open tundra to frozen tundra. However, after the blink of an eye in geological time—the 150 years since the dawning of the Industrial Age—a rapid transformation has begun.

There’s something else emerging from the slush at Hellmouth that renders the ancient geological history irrelevant. The collapsing crater is spewing out a greenhouse gas that is 30 times more potent than carbon dioxide: methane.

Meanwhile, in Washington, DC, the Trump Administration has given us a peek at its plans to disembowel the Environmental Protection Agency. According to a report this week in The Washington Post, the White House plans to reduce the agency’s budget by more than $2 billion, cut a fifth of its staff by the end of the year, and cut grants to the states and EPA air and water programs by 30 percent. Almost 40 EPA programs will be eliminated; among the programs that will be “zeroed out” are all of the agency’s climate-change initiatives.

The new EPA head is Scott Pruitt, who as Oklahoma’s attorney general sued the EPA more than a dozen times and challenged its legal authority to regulate air pollution and carbon emissions from power plants. A federal judge recently ordered Pruitt to make public all of his email messages from his tenure in Oklahoma. The emails reveal that Pruitt routinely cut and pasted documents drafted by oil and gas industry lobbyists and released them as official state government policy under his letterhead.

As a candidate, President Trump promised to reduce the EPA to “tidbits.” He also promised to “tear up” the Paris Climate Change Agreement that was initiated by the United States and signed by 177 nations in April of last year (the governments of 133 nations have ratified the agreement since the signing ceremonies).

In Western Antarctica, scientists discovered last year that the deterioration of the polar ice cap is being accelerated by a new phenomenon: “rivers” that have started flowing under the ice as the surrounding ocean water warms up. As rising temperatures melt the surface ice in Antarctica, the warming ocean water is burrowing its way under the ice and destabilizing the western ice shelf.

The same phenomenon is happening in Greenland, with melting glaciers acting as conduits for warmer ocean water that is destabilizing the ice that covers about 90 percent of Greenland’s land mass. A couple of months ago, an iceberg the size of Rhode Island calved off of Greenland’s ice shelf and plopped into the ocean. [That’s what the scientists call it, calving, like the cow that sank the Titanic. Go figure.]

We hate to ruin your next unexpectedly sunny winter day, but here’s the bottom line:

All of the dire predictions about how fast the calamity of climate change will unfold in coming decades were based on studies focused on the impact of carbon-dioxide emissions on the atmosphere and the corresponding rate of global warming. The climate scientists did not factor in a global belch of methane.

The permafrost contains millions of tons of methane that will be released into the atmosphere as the tundra thaws. The slushy craters, sinkholes and cracks that suddenly have opened up in the nether regions of the planet are spewing out methane like Old Faithful on steroids. The permafrost is melting much faster than anyone predicted.

Also, tons of methane are leaching out of natural gas fracking wells across the U.S. Recent federal regulations ordering the containment of methane emissions from fracking rigs are being cut by the new EPA chief and pasted onto the bottom of his new office garbage pail (which will not be dumped into the recycling bin when it gets full, because a climate-change denier like Pruitt undoubtedly thinks recycling is a waste of time).

Did we mention there are millions of tons of methane suspended in the freezing water at the bottom of the oceans, huge bubbles of potent greenhouse gas that eventually will rise to the surface as the oceans warm?

Climate change and global warming now are self-sustaining phenomena that are about to speed up like a Don Garlits dragster. The ice caps over Western Antarctica and Greenland are going to break apart and melt into the oceans, which are going to rise by more than 30 feet. A year ago, before the large-scale release of methane became apparent, a consensus of scientists did not believe this would happen until the end of this century. Factor in methane and it’s a safe bet that It’s going to happen within the next 50 years, maybe a lot sooner.

If you think the primary victims of this catastrophe will be the folks in low-lying areas of the Netherlands or Bangladesh, think again. The United States is the only nation on Earth surrounded on three sides by the world’s two great oceans. More than 40 percent of the U.S. population, about 130 million Americans, live in counties directly on the shoreline of our coasts.

The war against climate change is over, just a few short years after it began in earnest, and we’ve all lost. 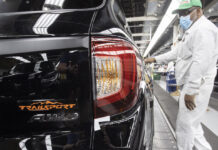