The NFL dropped the final cleat this week on the latest ignominious entry to its long record of forcing America’s cities to conduct tawdry bidding wars to host football franchises. Las Vegas won the “honor” of grabbing the Raiders from Oakland, CA. Clark County, NV agreed to finance $750 million of the cost of a new $1.9-billion stadium for the Raiders, a palace with a sliding roof to be erected on a barren patch of desert south of Vegas (which is appropriate since renderings reveal the new digs will resemble a huge clothes iron). 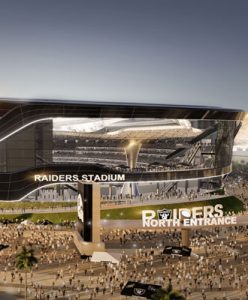 The Raiders’ move to Nevada is the last piece of the NFL’s most brazen team-shuffling competition to date. In this chapter, which took two years to play out, our national football empire (cumulatively worth more than $14 billion) managed to throw five U.S. cities into its snake-filled duel-to-the-death pit.

Los Angeles, Oakland, St. Louis, San Diego and Las Vegas were tossed into the pit in this round. Piling on is not a penalty in the NFL’s game of Franchise: The Survivor: the city that piles up the largest bags of cash-filled tribute to the Lords of the Gridiron gets to climb out the dungeon and live to see another opening kickoff. L.A. and Vegas were the big winners. Football fans in St. Louis, San Diego and Oakland must now hum along to Dandy Don Meridith’s signature epitaph “turn out the lights, the party’s over.”

Cash is king in the NFL’s money pit, tradition is worthless. The Oakland Raiders and the San Diego Chargers were founding members of the American Football League in 1961 (the AFL merged with the NFL in 1966); St. Louis has been home (with two brief interruptions thus far) to professional football since 1949.

But don’t bother shedding a tear for the losing cities in the NFL’s latest franchise-bidding fandago because they all came to the party with dirty hands. If you chart the movement of NFL teams between cities since the league was founded in 1922, you’ll end up with something that looks like a map unearthed by Prof. Robert Langdon in The Da Vinci Code. Here’s a sampling, limited to just one of the three unlucky cities in this round (we’d do all three, but we don’t want your server to crash):

The original St. Louis Cardinals began as the Chicago Cardinals, a founding member of the NFL (they started with a different name, but became the Cardinals when they donned maroon uniforms). In 1949, their owner got a better deal from St. Louis and moved the team there. In 1988, a new owner was bowled over by a pile of goodies from Phoenix and the team morphed into the Arizona Cardinals. The fans in St. Louis only had to endure a six-year pigskin drought; in 1995, the Los Angeles Rams moved to St. Louis (they didn’t bother to change the team’s name, perhaps subliminally recognizing that football fans everywhere are used to getting these franchise moves rammed down their throats).

Last year, St. Louis learned the hard way that when you play by the rules of the NFL’s Survivor game—and lay down some heavy-duty bad karma of your own—you can lose by the same rules in a transaction involving the same two teams: In January 2016, the NFL approved the move of the St. Louis Rams to a new $2.3-billion home in, you guessed it, Los Angeles.

So the cities that participate in football’s bidding wars can be winners and losers several times over. However, it’s once again time for us to talk about the real losers of the NFL’s location-swapping shenanigans: the taxpayers who foot the bill for the outrageously lucrative bids ultra-rich team owners are able to extort from cities for the privilege of building a new stadium for an NFL team.

Clark County, NV already was holding about $2.6 billion in outstanding debt in bonds when it agreed last year to add at least another $1.6 billion to finance the new Raiders stadium and an expansion of the Las Vegas Convention Center. It will take the county more than three decades to pay off these debts. [Anybody wanna bet the new contract with the NFL doesn’t include a clause prohibiting the team from moving out before the bonds are paid off?]

When the new bonds were approved by the Clark County Board of Commissioners in November, Jessica Colvin, the county’s chief financial officer, said she would work hard to ensure that the county’s AA+ credit rating from Standard and Poor’s is not downgraded as a result of incurring the new debt load. “We will be contemplating how much we can provide for their debt issuance that would not jeopardize our current credit rating or increase the cost of issuing county-related project debt,” Colvin said.

Even the man who last year pioneered the arrival of professional sports in Las Vegas had some dubious things to say about the humongous new deal for the Raiders. Bill Foley, who paid $500 million for a new NHL franchise that will be the first major pro team in Las Vegas when it begins play this year, questioned the wisdom of spending so much money to lure a football team.

“I felt like there were a lot of better ways to spend $750 million than bringing the Raiders to Las Vegas,” he told Vegas Hockey Hotline, a radio show. “We could spend it on police, firefighters and teachers and have them all be the best in the country. But I guess we’re going to spend it on the Raiders.”

Before you brand Foley a hypocrite, consider this: the arena that will be home to his new hockey team (the Las Vegas Golden Knights) was financed with private funds. And since Mr. Foley brought up teachers, here are a few details that may put Clark County’s new deal with the NFL into perspective on a human scale we can all understand:

The Clark County School District decided to pack even more students into classrooms this year when it finalized a 2016-17 budget that balances lower-than-expected enrollment growth and a virtual freeze in property tax collections. Last year, the Clark County School Board approved a $2.2 billion budget for the next academic year that includes larger class sizes and fewer year-round schools. Spending is $13.9 million short of the 2016 plan, despite an increase in per-student state funding. District officials already had increased class sizes at the secondary level last year. In 2016, the student/teacher ratio was 32-to-1 in fourth and fifth grades; 34.5-to-1 in middle school; and 34-to-1 in high school. This year, the ratios have risen by one student in grades four and five at underperforming elementary schools; by one in all grades at other elementary schools; and by 1.5 at middle and high schools.

Meanwhile, sports fans in Vegas are debating a new nickname for their incoming NFL franchise. One wag, noting that the NFL already has a franchise named the Saints, has proposed the Las Vegas Sinners as the new team name.

We’re just guessing here, but we suspect that a lot of Clark County’s teachers already are calling them by that moniker.