By the BF Staff
From the January/February 2017 Issue

Plaquemines LNG will create 250 new direct jobs at an average annual salary of $70,000 per year, plus benefits. Louisiana Economic Development estimates that the project will result in an additional 728 new indirect jobs, for a total of more than 975 new jobs for Plaquemines Parish and the Southeast Region. The project also is expected to generate 2,200 construction jobs.

“We are happy to welcome Venture Global to Plaquemines Parish for its second multibillion-dollar LNG project in our state,” Gov. Edwards said. “The long-term prospects for the U.S. natural gas industry are bright, and Louisiana is well-positioned to capitalize on that success with ready access to natural gas supplies and deepwater access for shipping LNG to destinations worldwide. This facility will have a major impact on the local and regional economies by providing hundreds of new high-paying jobs for our skilled workforce.”

Plaquemines LNG will be built to an export capacity of 20 million metric tons per year. The complex will be located on the west bank of the Mississippi River near Mile Marker 55, downriver of Myrtle Grove. The 632-acre site—about 30 miles south of New Orleans—includes 7,000 feet of river frontage and is owned by the Plaquemines Port Harbor and Terminal District.

“From the very inception of our LNG export terminal project in Cameron, Venture Global LNG was and remains convinced that Louisiana is the best place in the United States to develop such important infrastructure projects,” said Venture Global co-Chief Executive Officer Bob Pender said. “We have been delighted with the state’s supportive environment, unified regulatory approach, and skilled and qualified workforce. We are proud to now be developing a second LNG facility, to be located in Plaquemines Parish, Louisiana. Plaquemines LNG will invest billions in new facilities, equipment and labor and bring thousands of temporary and hundreds of permanent jobs to the state.” 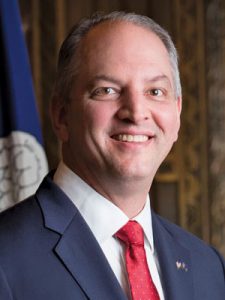 “The support we received from the communities of Cameron and Plaquemines, along with a fair and consistent approach from regulators, reinforced our decision to expand our commitments in Louisiana,” added Venture Global Co-CEO Mike Sabel. “Together, Plaquemines LNG and Calcasieu Pass will supply the world’s growing demand for low-cost, clean and reliable North American energy.”

LED began discussions with Venture Global about the Plaquemines Parish project after the company’s announcement of the Calcasieu Pass LNG project in late 2014. The company is expected to utilize the state’s Quality Jobs and Industrial Tax Exemption programs. 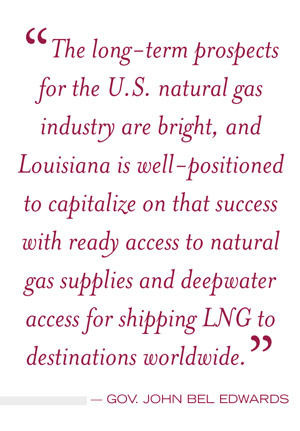 Venture Global announced its Calcasieu Pass LNG project at the intersection of the Calcasieu Ship Channel and the Gulf of Mexico in Cameron Parish in December 2014. Production could begin by late 2019, and full operations are projected to start in 2020. That facility will produce 1.4 billion cubic feet per day of liquefied natural gas for export, with an annual capacity of 10 million metric tons.

“We have worked for nearly two years on Venture Global’s Plaquemines LNG project,” Plaquemines Port Executive Director Sandy Sanders said. “Venture Global has gone above and beyond in this process and we look forward to a long, mutually beneficial relationship with them.”

GLOVIS America’s has announced it will create a new inland distribution center for imported vehicles at the former General Motors plant in Shreveport.

At the distribution center, employees will outfit imported vehicles with equipment and exterior upgrades, as requested by local dealers. GLOVIS America is a third-party, finished-vehicle logistics company for Kia Motor America and Hyundai Motor America, and a subsidiary of Hyundai GLOVIS Co., which is part of the Hyundai Kia Automotive Group.

GLOVIS will make a $1 million capital investment and create 150 new direct jobs, with an average salary of $31,760, plus benefits. LED estimates the project will result in 246 new indirect jobs, for a total of 396 new jobs in Louisiana’s Northwest Region. The investment is the latest at the former GM plant in Shreveport, which the State of Louisiana and the North Louisiana Economic Partnership, or NLEP, have marketed extensively since GM’s departure in 2012.

“GLOVIS America’s announcement today signifies a new chapter in revitalizing the former GM plant and returning great jobs to Shreveport and the surrounding region,” Gov. John Bel Edwards said. “We congratulate GLOVIS on this exciting announcement. Upon the launch of operations, I know GLOVIS will find an abundance of highly skilled talent and an unrivaled infrastructure to receive and ship vehicles. We also want to thank our partners at the North Louisiana Economic Partnership for their role in attracting this project win to our state.”

The new center will operate in a 125,000-square-foot facility and more than 90 adjoining acres at the former GM site in Shreveport, where Industrial Realty Group is actively recruiting tenants for Caddo Parish’s Industrial Development Board, the site owner. Earlier this week, the company signed a lease with IRG. The first vehicles arrived in Shreveport by rail on Tuesday, with future shipments to arrive from South Korea and potentially from sites in the U.S. The company highlighted the ability to expand on-site as a key factor in selecting Shreveport, with additional phases planned for the future.

“We are very excited to be opening a state-of-the-art vehicle logistics and processing center in Shreveport, Louisiana,” said President Glenn Clift of GLOVIS America. “Shreveport has been chosen after a long search and due diligence process to replace GLOVIS’ long-term facility in Texas. A combination of existing infrastructure, strong labor force and competitive inbound-outbound rail and outbound trucking costs allowed Shreveport to beat the competition. We anticipate this facility will have a rapid ramp-up over the next few months and will handle over 75,000 new vehicles annually.”

At the new inland distribution center, GLOVIS is receiving new finished vehicles built at Kia’s factory in Monterrey, Mexico. At the Shreveport center, GLOVIS America will provide added options and packages to the vehicles prior to delivery to dealerships. Options and packages include security systems, Bluetooth connectivity, mud guards, electronics, sunroof accessories, decal kits, and other specifications as requested by the dealerships. Headquartered in Irvine, California, GLOVIS America is responsible for the delivery of all Hyundai and Kia vehicles to dealerships in the United States. The company operates eleven different locations in the U.S., receiving vehicles at ocean ports and at two factory locations.

“This is a great win for the region. North Louisiana’s logistical and transportation infrastructure is a major competitive advantage for our communities,” said NLEP President Scott Martinez. “NLEP and state and local partners will continue working with GLOVIS America for future growth in Caddo Parish.”

LED began discussing the project with the company, NLEP and IRG in April 2016. In addition to site selection assistance, the State of Louisiana is offering use of its Enterprise Zone Program to GLOVIS.