In the six years that have elapsed since a tsunami spawned by a powerful earthquake destroyed half of the Fukushima Daiichi nuclear power complex on Japan’s northeast coast, we’ve given you annual reports on the effort to contain and eventually clean up the radioactive hazard left behind after three of the six reactor cores at Fukushima melted down and the buildings containing them exploded into rubble. 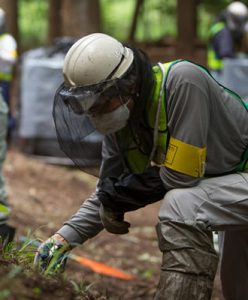 We’ve told you about tons of radioactive water seeping into the Pacific from hundreds of make-shift storage tanks set up around the damaged reactors to hold cooling water that must continuously be sprayed over the melted cores to keep them from heating up and reaching critical mass. We’ve detailed desperate schemes hatched by the plant managers, Tokyo Electric Power Co. (TEPCO), including the construction of an underground ice-wall barrier to prevent leaks and the use of robots to locate globs of highly radioactive core remnants sprayed throughout the insides of damaged reactor containment vessels.

And we’ve chronicled the spread of radioactive particles from Fukushima to the other side of the Pacific, where they’ve been detected on beaches in the U.S. and Canada.

But tomorrow’s sixth anniversary of the 9.0-magnitude earthquake and tsunami that hit Fukushima brings some signs of progress as well as a sobering reminder of the scope of the work that still must be completed.

First, let’s take a moment to remember the human toll of the natural calamity that produced the world’s worst nuclear disaster. The massive earthquake and tsunami on March 11, 2011 killed nearly 18,000 people and wiped out numerous coastal communities, forcing the evacuation of 160,000 people. In addition to the radioactive mess that surged into the ocean after the meltdowns and explosions at the Fukushima Daiichi complex, winds deposited radioactive fallout over large areas in northeastern Japan. In the six years that followed, many of the dislocated residents have been unable to return to their homes, although that is beginning to change (more about that later).

Here’s the good news (although we caution you not to embrace this without a healthy dose of skepticism, since most of the information comes from TEPCO, which through the years has proven to be a less-than-reliable source):

TEPCO is declaring that radiation from the crippled reactors no longer is having an impact outside of the plant complex at Fukushima. According to the TEPCO official in charge of “decommissioning” Fukushima Daiichi, Naohiro Masuda, evacuated residents are returning to the area as decontamination work reduces radiation exposure levels to acceptable thresholds. In the plant complex itself (not including the sealed-off reactor vessels), radiation levels now are said to be so low that the 6,000 workers slowly demolishing the damaged buildings can wear typical construction-site safety gear instead of bulky radiation suits. Masuda says radiation levels just offshore remain below the limit for drinking water set by the World Health Organization.

TEPCO says it’s finally succeeded in minimizing leaks from 1,000 10-meter-tall storage tanks it erected at the site to hold nearly a million tons of radioactive water that’s been used to keep the damaged reactor cores from overheating. Masuda says the wastewater itself has been made safer by the removal of cesium, strontium and more than 50 other radioactive elements from the water. But he concedes that experimental methods to remove the radioactive hydrogen isotope tritium from the wastewater have yet to succeed “and may not be practical.” Options under consideration for disposal of tritium-laced water include further dilution, which would permit the wastewater to be dumped into the ocean at acceptable radiation levels, or an evaporation method that would gradually release the element into the atmosphere (this method was used during the cleanup at the Three Mile Island nuclear plant in Pennsylvania after a partial reactor-core meltdown in 1979).

Despite this relatively positive news, Masuda admits that the long-term picture for cleaning up tons of highly radioactive core remnants at Fukushima remains daunting: the full cleanup will take at least 30 years and will cost at least $190 billion to complete.

TEPCO still has not overcome the biggest challenge to the cleanup at ground zero of the disaster: how to map the precise location of the melted core remnants and how to remove them without endangering the lives of cleanup crew workers. Radiation levels that finally have been measured around the damaged reactor vessels have shocked scientists—the levels are seven times higher than the previous record (measured at the damaged reactor core at Chernobyl after it exploded in 1986).

Which brings us to the dying robots.

For more than two years, TEPCO has sent robot probes with cameras into one of the damaged reactor containment vessels in an effort to start mapping the location of blobs of highly radioactive core remnants that are spewed across the bottoms of the three damaged vessels at Fukushima (there are an estimated 600 tons of deadly waste in and around the vessels). So far, the robots are no match for the radiation or the debris they must climb over.

In January, the camera on a “scorpion” robotic probe sent into the Unit 2 containment vessel was fried by radiation in less than two hours, though it did return important images before it conked out. The robot was designed to function when exposed to 73 sieverts of radiation (the level measured at Chernobyl), but encountered more than 530 sieverts. Tepco recorded the record-high radiation near the reactor core, suggesting that some melted fuel had escaped from the containment vessel (the scorpion found a three-foot-wide hole in a metal grate in the reactor’s primary containment vessel). To put this in human terms, exposure to five sieverts is enough to kill half the people exposed to it within a month, and a single dose of 10 sieverts can kill a person in weeks.

Last month, a small robot on tank-like treads was sent through a 10-centimeter-diameter pipe into the Unit 2 vessel to investigate the presumed location of the damaged fuel. But it got tangled up in debris and was abandoned. TEPCO officials now say they may need to develop a robot capable of jumping over the debris before they resume mapping Unit 2 and begin the mapping of the Unit 1 and Unit 3 containment vessels at Fukushima; however, TEPCO insists that a planning session to set a policy for recovering the melted fuel will take place on schedule this summer.

The effort to provide housing for residents displaced by the disaster also may not be going as well as advertised. Newspapers in Japan report that displaced people have moved into only three of 13,000 temporary homes erected by the Fukushima prefectural government and offered to applicants in a program that began last May. The newspapers also report that the population of displaced people, which still totals nearly 100,000, is experiencing high rates of mental health problems, including post-traumatic stress disorder.

The gradual shrinking of the boundary of the restricted zone around Fukushima also has been painfully slow. For example, the 2011 evacuation order covering the nearby village of Namie is being partially lifted for the first time this month.

While the recovery effort at Fukushima slogs on, it’s becoming increasingly likely that Japan’s nuclear power industry may never regain its previous position as a key component of the island nation’s energy supply. When the disaster hit Fukushima in 2011, there were 54 nuclear reactors operating in the country, generating about one-third of Japan’s electric power (all of the nation’s reactors were shut down after the 2011 earthquake). Today, just four of these reactors are in operation (one has been “paused” while a legal challenge is heard).

Eleven Japanese reactors are in the process of being decommissioned (including the six at Fukushima) and decisions are yet to be made about 42 other reactors. Government plans to start another five reactors this year have been met with local protest marches, public demonstrations which are rare in Japan.

The people of Japan haven’t forgotten what happened at Fukushima on March 11, 2011, and neither will we.

Should Japan restart the reactors at its nuclear power plants?