Following years of sluggish economic recovery, business leaders believe 2017 will usher in a long-awaited acceleration in growth, according to “America’s economic engine – Breaking the cycle,” Deloitte’s 2017 report on business and economic trends in the privately-held and middle-market segment.  Of executives surveyed after the November election, 83 percent are confident the U.S. economy will improve over the next two years, compared to 65 percent last year. In fact, 39 percent of respondents expect the U.S. economy to grow in excess of 3.5 percent over the next 12 months.

Executives surveyed are equally optimistic about their company’s success and performance in the year ahead, particularly across key business metrics such as employment, productivity, profits and capital investment. Seventy-eight percent of respondents expect revenue growth in excess of 5 percent. 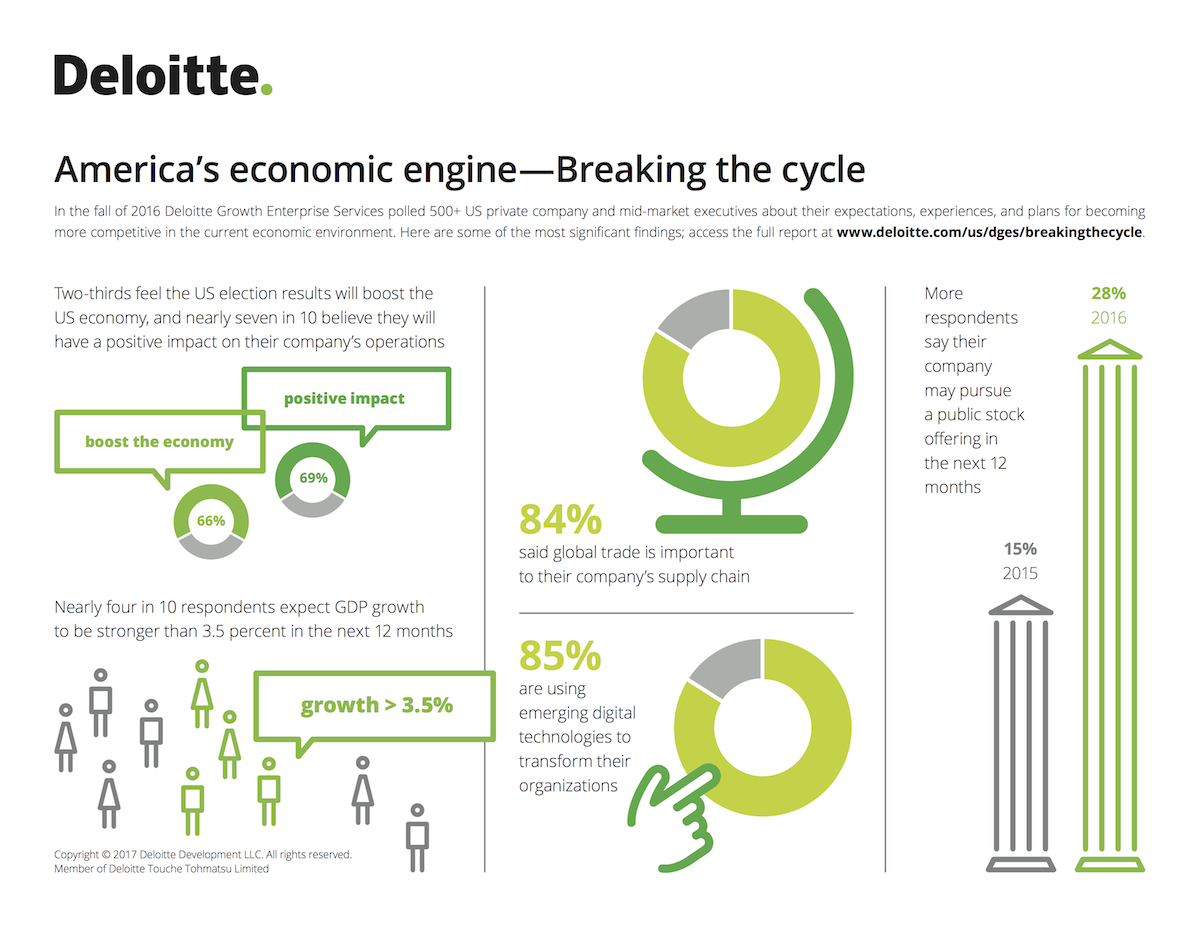 In addition, the survey revealed that two-thirds of respondents believe the U.S. election results will boost the U.S. economy; another 63 percent believe the new administration will have a positive impact on their company’s operations.

While postelection promises have buoyed confidence in the economy and in company growth among private company and middle market executives, the results also show increased uncertainty: 70 percent feel more uncertain than they did a year ago about the main factors driving their future business prospects.

“Certain economic and geopolitical issues are among the obstacles these executives cite in the survey,” says Bob Rosone, managing director, Deloitte Growth Enterprise Services, Deloitte LLP. “However, the respondents appear hopeful that these challenges might be addressed with policy changes by the new administration.”

According to the survey, business leaders see increased regulatory compliance (33 percent), keeping up with the pace of technology (33 percent), and rising healthcare costs (32 percent) as the top three obstacles to their company’s growth. Executives also emphasized skills shortages as a growing concern, increasing by 10 percentage points from last year as a roadblock to economic and business growth.

When asked which government measures would help their businesses grow the most over the next 12 months, the top response cited was reducing corporate tax rates; keeping interest rates low, rolling back healthcare costs, and supporting infrastructure needs were all tied for the next most important measure.

Technology yet again tops the list as the key investment priority for surveyed companies over the next 12 months. Business leaders are particularly looking to focus their technology investments on cloud computing (42 percent), data analytics (40 percent), and customer relationship management (34 percent). They indicated the greatest potential returns from technology investments like these may be business process improvement, employee productivity and customer engagement.

Employee development and training also continue to be a key investment, as 72 percent of survey respondents indicated they have difficulty finding new employees with the right skills and education. For this reason, training (47 percent), increasing full-time employees (44 percent), and increasing compensation (33 percent) were cited as the top investments in talent over the next 12 months.

The survey reiterated the importance of the global economy as U.S. mid-market companies are increasingly looking overseas to expand their operations, boost their productivity, and develop new products and services.

More than half of the companies surveyed expect to increase their revenues generated outside of the U.S., with 29 percent predicting revenue increases between 26 and 40 percent over the next 12 months. Canada, Western Europe, and Asia Pacific are expected to be the top three contributing markets. Additionally, nearly 60 percent of mid-market companies expect to have 11 percent or more of their workforce outside the U.S., compared to 42 percent currently. This will be an important trend to follow as the skills gap consistently emerges as a growing concern.

“As mid-market companies plan for overseas expansion and closing the skills gap, new policies and regulations around trade could have a significant impact on economic activities abroad,” concluded Nanney. “The good news is that companies in this segment are confident and looking for opportunities to improve their businesses in an ever-changing landscape.”