By Jack Rogers
From the January/February 2017 Issue

Texas has been named Business Facilities’ 2016 State of the Year. The Lone Star State joins Tennessee as one of only two states to win the magazine’s top honor three times since it was created in 2007. In addition to the 2016 award, Texas snared BF’s inaugural State of the Year honor in 2007; TX also won the top BF honor in 2012. 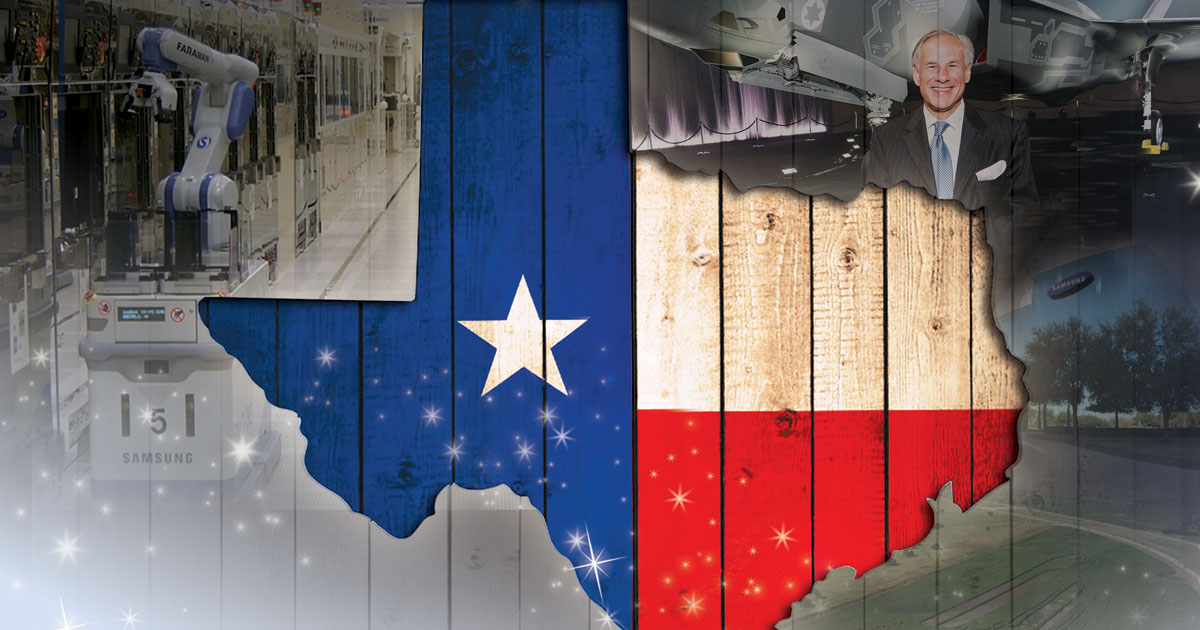 Texas lassoed in five top projects that created nearly 6,000 new jobs from a diverse mix of growth sectors, including facilities for Charles Schwab, Amazon, Lockheed Martin and two top pharma players. In addition to multi-billion-dollar investments in petrochemical expansions, the top five for capex in TX included $2.2 billion in spending commitments from Samsung and Lockheed Martin.

“Texas is a perennial contender for our State of the Year award, but in 2016 TX blew away the competition,” BF Editor in Chief Jack Rogers said, in BF’s announcement of the award in January. “Already a leader in semiconductors, a top-tier data-center hub, a burgeoning aerospace giant and home to the nation’s largest wind-power grid, the Lone Star State continues to maximize its advantages to expand the most dynamic state economy in the U.S.”

Texas dominated BF’s 2016 State Rankings Report, published in our July/Aug issue. Texas notched the best across-the-board results in the annual rankings competition, making the top 10 in a record-shattering 18 out of 24 State Rankings categories. TX was our top-ranked state in four categories (Best Infrastructure, Exports Leaders, Installed Wind Power Capacity and Wind Power Expansion Leaders) and finished in the top three in 10 categories. “We’ve said it before and we’ll say it again,” Rogers noted. “When it comes to ranking the states for the keys to success in economic development, pick a category and more often than not you’ll find Texas ahead of the pack.”

Standouts among Texas’ recent project successes include Lockheed Martin’s $1.2-billion upgrade of its Fort Worth aircraft assembly facility. The aerospace giant is in the midst of an expansion that will enable it to triple production of F-35 Joint Strike Fighter jets by the end of 2017; peak production will add at least 1,000 new jobs to the Fort Worth facility.

[Editor’s Note: After we announced our 2016 State of the Year Award for Texas, then-President-elect Donald Trump publicly criticized the cost of the F-35 Joint Strike Fighter program, which is building hundreds of next-generation attack aircraft for all branches of the U.S. military and for our NATO allies. After holding private discussions with Trump, Lockheed Martin CEO Marillyn Hewson pledged that the aerospace defense giant would create an additional 1,800 jobs at its Fort Worth plant and significantly reduce the high cost of F-35 production.]

“We are going to increase our jobs in Fort Worth by 1,800 jobs and when you think about the [F-35] supply chain across 45 states in the U.S. it’s going to be thousands and thousands of jobs,” Hewson said outside Trump Tower following a meeting with the president-elect. “I also had the opportunity to give him some ideas on things we think we can do to continue to drive the cost down on the F-35 program, so it was a great meeting,” Hewson added.

Financial services giant Charles Schwab is investing $100 million in a new regional campus in Westlake, TX that will create 1,200 new jobs over the next 10 years, in a facility that will include more than 500,000 square feet of commercial office space.

“Texas remains the brightest beacon of free enterprise in the nation, and Charles Schwab’s decision to expand its operations in North Texas is yet another testament to the Lone Star state’s promising economic climate,” Gov. Greg Abbott said, in a written statement following the company’s announcement in August. “By expanding their facilities, pouring millions into the Texas economy and creating more than a thousand new jobs, Charles Schwab is investing in the North Texas community and bringing more opportunities for our world-class workforce,” he added.

As part of the deal, the Texas Enterprise Fund (with the approval of the governor) offered Charles Schwab a grant of $6 million, the largest such grant given by the TEF during Gov. Abbott’s administration. The grant is contingent on the company meeting its job-creation goals in the next decade.

The new campus will sit on a total of about 70 acres and will anchor a larger proposed Circle T mixed-use development, which will be developed in a partnership with Fort Worth-based Hillwood and The Howard Hughes Corp. of Dallas.

Westlake plans to pony up an estimated $1.3 million in property tax abatement savings and sales tax refunds over a 10-year period based on estimated capital investment and job creation.

Samsung continues to expand its world-class semiconductor fabrication complex in Austin. The South Korea-based tech giant is investing another $1 billion at Samsung Austin Semiconductor (on top of the $16 billion already invested in the Austin complex), an expansion that will address growing demand in the consumer electronics sector for advanced “system on the chip” (SoC) products for mobile devices.

Texas landed a major tech prize in 2015, when it secured Facebook’s commitment to build a mammoth new data center in Fort Worth. The social media giant’s recently opened $500-million data center houses computer servers and equipment on a 110-acre plot of land in the 14100 block of Park Vista Boulevard just north of Texas 170.

“Facebook’s mission is to ‘connect the world.’ With locations in Austin, Dallas, and now the new data center in Fort Worth, those connections are made right here in the heart of Texas,” Gov. Abbott said at the 2015 groundbreaking. “When it comes to doing business, there really is no place like Texas.”

The Facebook data center initially was constructed as a 250,000 square foot facility that will eventually triple in size to 750,000 square feet. Once completed, Facebook’s Fort Worth data center will be one of the largest buildings in North TX. “Our Fort Worth facility will be one of the most advanced, efficient, and sustainable data centers in the world. It will feature the latest in our Open Compute Project hardware designs—including Yosemite, Wedge and 6-pack —and it will be cooled using outdoor air instead of energy-intensive air conditioners. Yes, we can make that work even in the middle of the kinds of summers we have here in Texas,” said Ken Patchett, director of data center operations, west region, for Facebook.

A 2016 U.S. Bureau of Economic Analysis report ranks Texas as the top exporting state in the nation for the 14th consecutive year. The Lone Star State had more than $251 billion in goods exported in 2015, well ahead of second-place California’s $165 billion (TX and CA were the only states to exceed $100 billion in exports). Texas also was a prime destination in 2015 for foreign direct investment flowing into the U.S. TX garnered an 11 percent share of the North American FDI influx with $7.5 billion in investments, second only to New York.

Texas is mounting a spectacular rebound from last winter’s oil price slump with an unprecedented fracking expansion in West Texas that promises to make the U.S. the world’s leading oil exporter in coming years.

Oil industry experts recently confirmed that shale-oil deposits in the Permian Basin in West Texas and New Mexico are holding an estimated 75 billion barrels of oil, making the region second only to Saudi Arabia’s Ghawar field as the world’s largest oil reserve. The Wolfcamp Formation in TX alone is holding an estimated 20 billion barrels of shale oil, roughly three times larger than North Dakota’s Bakken field and the largest U.S. “unconventional” crude reserve ever discovered, according to the U.S. Geological Survey.

“The fact that this is the largest assessment of continuous oil we have ever done just goes to show that, even in areas that have produced billions of barrels of oil, there is still the potential to find billions more,” said Walter Guidroz, coordinator for the U.S. Geological Survey’s energy resources program.

Oil industry experts have consistently maintained that it’s not cost-effective to recover oil by fracking when the price of crude is below $60/barrel, as it has been since the end of 2015, but the Permian Basin deposits appear to be the exception to the rule, because they are so productive. Oil industry engineers who have been crawling all over West Texas and New Mexico in recent months report that the Permian deposits are so rich they can generate profits even when oil prices are stuck below $50/barrel. The Permian gushers are so powerful they’ve set off a land grab in West Texas as the oil and gas industry giants race to secure shale-drilling rights. The boom looks like it’s going to be much bigger than the black gold rush that took off in North Dakota in 2008. Here are some recent developments:

Texas remains the leader by far among U.S. states in installed wind power capacity with nearly 18,000 megawatts of installed wind energy, almost triple the capacity of second-place Iowa. The Lone Star State has no intention of relinquishing its installed wind power capacity any time soon: TX also led the nation in wind farm expansions in our 2016 rankings, beginning work on more than 5,000 MW of expanded capacity. With a $7-billion investment in its fully operational West Texas wind power transmission grid, TX soon will be a national leader in the percentage of wind power it uses to generate electricity in the state.