For several years now, we’ve been tracking in this space the inexorable progress made by automakers and tech giants who are developing self-driving vehicles. We’ve also highlighted the significant hurdles that must be overcome before self-driving cars can reliably be put into widespread use on America’s roads. 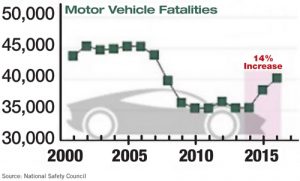 Several accidents involving driverless cars colliding with vehicles driven by humans in the past two years flashed a caution light on the pell-mell push to enter the age of self-driving cars. The yellow warning light got brighter last year after a motorist who had activated Tesla’s autopilot feature died when the car plowed into the back of a truck, apparently mistaking the white paint on the truck for the morning sky.

The biggest challenge facing the advent of self-driving cars is one common to most artificial intelligence endeavors: how do you get computer programs to anticipate and react to the behavior of humans?

The driverless cars that already have been built are technological marvels that can apply in a fraction of a second the logical instructions embedded in their code to just about anything that confronts them on the streets or highways. But there’s one glaring exception that renders these intelligent vehicles clueless: the self-driving machines can’t understand the stupid things that stupid humans impulsively do when they get behind the wheel.

Logic may dictate there’s a high probability of a loss of vehicular control when a driver is holding a mid-sized coffee in his left hand while searching for the Tom Petty channel on SiriusXM with his right hand in the midst of a hands-free phone chat with Aunt Betty while cruising down the Garden State Parkway. Sorry, but Mr. Spock got off at the last exit, and the idiot sipping the dark roast in the Subaru drifted into your lane 10 seconds ago.

There’s an obvious solution to this technical challenge: make all the cars self-driving and tell the humans they can only be passengers from now on. But that’ll never happen, right?

Wrong. There’s a perfect storm developing that’s poised to blow across America’s highways and byways, and it threatens to sweep away one of our all-time favorite human activities (yeah, we know it’s a privilege and not a right, officer).

In the first decade of the new Millennium, auto-safety improvements like antilock brakes and side-curtain airbags produced a dramatic reduction in the annual number of motor vehicle fatalities in the U.S., which dropped from a peak of 45,000 in 2002 to 35,000 in 2010. During the past two years, this trend suddenly reversed itself, big-time. According to the National Safety Council, which tracks these numbers, motor vehicle fatalities in 2015 and 2016 totaled 37,757 and 40,200, respectively. The 14-percent spike in crash deaths is the largest two-year increase recorded in more than 50 years.

Experts debating the cause of this spike have divided into two camps. One camp firmly believes the prime culprit is driver distraction caused by the bevy of high-tech diversions now offered in our Bluetooth-enabled vehicles (accompanied by text messages scrolling on smartphones surgically attached to drivers). The other camp—which surprisingly includes consumer protection champion Ralph Nader—says mundane old-school issues are behind the surge in vehicular fatalities. These include lenient seat-belt laws and cops not writing enough speeding tickets. Nader says back-seat passengers should be required to buckle up, cameras should be installed on highways to deter speeders and regulations should be tightened on heavy trucking.

We hate to differ with Mr. Nader, who single-handedly was responsible for some of the greatest advances in auto safety. It ain’t the belts, Ralph, it’s the devices.

But while the debate about what’s causing the spike in crash deaths goes on, a related debate among automakers about the solution appears to be moving towards a consensus.

A few years ago, the Society of Automotive Engineers came up with a definition of six levels of vehicular automation. The levels range from zero (a human driver is in full control of the vehicle) to Level 5 (the car does everything by itself in all circumstances). Until recently, automakers developing autonomous vehicles were divided between those aiming for Level 3 (cars that have autopilot features, but still have a driver sitting behind a steering wheel who can retake control) and those charging ahead to Level 4 (a self-driving car without a person in the driver’s seat), with most of them cautiously opting for Level 3.

The enthusiasm for Level 3 vehicles began to wane when studies showed that “stand-by” drivers can’t react quickly enough to retake control of the vehicle because they are lulled into a false sense of security (or occupy themselves with non-driving activities) when the autopilot is on. Recent announcements, including a spate made during last month’s Consumer Electronics Show (CES) in Las Vegas, indicate the momentum towards Level 4 self-driving cars is accelerating. Here’s a sampling:

There’s no avoiding the conclusion that, as our addiction to high-tech devices increases the danger of driving, our resistance to self-driving cars will decrease. The auto industry is planning accordingly. Most industry experts now believe that self-driving vehicles will rule the road by 2025 or sooner.

We have to admit we’re ambivalent about the dawning of the age of driverless cars. Getting rid of car crashes is an admirable goal, one we all can applaud. Eliminating driving on the list of pleasurable human endeavors, not so much.

We all seem to be beaming ourselves at warp speed to a risk-free world in which humans are encased in a sterile bubble of technology, irrelevant baggage carried by machines that are much smarter than we’ll ever be. The Internet of Things will run everything and keep the carbon-based organisms from bumping into each other.

But for as long as people have walked the Earth, life and risk always have gone hand in hand at every stage of human development. People are most alive when they defy the odds and expand the envelope of what they can achieve and where they can go. Nobody told Neil Armstrong, Charles Lindbergh and Christopher Columbus to keep their hands off the wheel. In 1969, as NASA’s primitive computers were guiding his Lunar Module into a rock-strewn crater, Armstrong took the controls as the fuel meter said the vehicle could only stay aloft for another 30 seconds. The pilot calmly landed the machine on a flat plain on the Moon and took a giant leap for all mankind.

Do not go gently into that high-tech night, drivers. Put the pedal to the metal, hear the pistons roar, unleash the muscular stallions of your dual overhead-cam power plant and feel the G-forces push you back against the fine Corinthian leather of the bucket seats, vibrating with the drumbeat of a Phil Collins CD amplified by eight Infinity speakers.

Burn rubber and blow the doors off that driverless pod clogging up the middle of the road at precisely 55 m.p.h. Put that empty, soulless squid in your rear-view mirror and repeat after us: