When it became clear in the middle of the last century that economic growth depended on facilitating the movement of people traveling in motor vehicles, California built its future around the automobile. 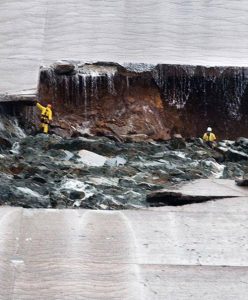 The Golden State constructed a vast network of freeways that turbocharged the exponential growth of its population. In what seemed like the blink of an eye, a barren stretch on its southern flank (dotted with strawberry fields and drill rigs) was transformed into the state’s largest city, the sprawling entity everyone calls L.A.

Undeterred by insufficient water supplies in the sunny southern half of their state, the bold futurists who built California also erected the most impressive network of dams and waterways anyone had seen since the Roman Empire. They transported billions of gallons of water from the northern part of the state to the south, anointing dry valleys and creating a bountiful oasis of agriculture, making CA the nation’s premier vegetable garden and winery.

But just when it seemed like California’s place in human history was secure as a vibrant symbol of man’s triumph over nature, nature struck back.

For five of the past six years, the phenomenon known as global warming inflicted a drought of biblical proportions on California. In 2015, with CA’s water system on the verge of collapse, state officials imposed draconian water conservation measures. Plans to expand reservoirs and raise more dams were brought out of mothballs and put on the front burner. Water was running out and the clock was ticking.

In places like Lake Oroville, a reservoir built into a canyon about 70 miles north of Sacramento, the water level was so low the residents had to drag their houseboats off the dry banks and into a dusty field.

Then, last year, the rains finally came. But just as California began to climb back into the batter’s box after getting clobbered with the bean-ball of the worst drought in its recorded history, nature served up a wicked curve: in terms of rainfall, 2016 was the wettest year on record in CA.

While it brought welcome relief to a state parched by years of drought, the deluge also exposed the Achilles Heel of California’s water storage and delivery system: the 1,585 dams that form the core of the Golden State’s intricate water network were not designed to handle this much water; most of them were built at least 50 years ago, and many are in dire need of upgrades and repair. Now, there’s too much water and the clock is ticking.

Climate change has been a double whammy for California. Hotter temperatures mean dryer summers, droughts and wildfires. But global warming also is changing the wet winter weather in CA in a way that portends disasters to come: warmer winter temperatures mean less snow and more rain. Year-round maximum stress may be the new normal for the Golden State’s water system.

A harbinger of the impending disaster has been on stark display in Northern California for the past two weeks, with Lake Oroville and the 770-foot Oroville Dam—the nation’s tallest dam—at ground zero of the catastrophe.

In the five days from Feb. 6 -10, Oroville received more than six inches of rain, according to the National Weather Service. The Sierra Nevada mountains and surrounding foothills received up to 24 inches of rain and snow in the same time period. The storm’s runoff raised the water level of Lake Oroville by 50 feet in five days.

Like many large dams, the Oroville Dam has natural spillways built into its earthen sides. Since its construction in 1968, the water level of the reservoir has never exceeded its capacity. Over the weekend, water began cascading at the rate of 100,000 cubic feet per second down the sides of the Oroville Dam for the first time in its history. Within hours, a humongous sinkhole developed in one of the dam’s spillways.

Engineers inspected the sinkhole, crawling around like ants in the giant hole. They soon warned that the spillway might be in imminent danger of collapse, a breach that could unleash a 30-foot wall of water into the Feather River that would rampage through several cities in the valley below. The state began an emergency evacuation of more than 200,000 Californians who live directly below the Oroville Dam.

[As this is being written, engineers were able to lower the level of the reservoir by opening some of the floodgates at Oroville; they also stabilized the sinkhole in the spillway by filling it with large boulders. Residents were told they could return to their homes. However, experts warn that with California’s rainy season expected to last well into April—followed by the melting of snow-packs in the Sierra Nevada mountains—the crisis at the Oroville Dam is not over and could get much worse.]

The blame game over the Oroville disaster already has begun. Environmentalists say they warned the state in 2005 that the dam’s spillways needed to be reinforced with concrete, but the project to fix the design flaw was never undertaken. Meanwhile, state water officials are trying to figure out how to repair the Oroville structure without shutting down a critical lynchpin in the water-service system for Southern California.

Experts are warning that what transpired at Oroville could be repeated throughout the state’s Byzantine system of dams, pipes, pumps and aqueducts. According to the U.S. Army Corps of Engineers’ National Inventory of Dams, 17 dams in California are listed in poor condition and an additional 97 are graded fair.

Infrastructure repairs are not the only problem facing CA’s dams. A significant number of these structures sit on earthquake fault lines that were thought to be dormant when the dams were built, but which now are showing signs of seismic activity. Two large dams near San Jose, the Anderson Dam and the Calaveras Dam, currently are undergoing upgrades to make them better prepared to withstand seismic shocks. After a fault line was shown to be active under the large dam at Lake Isabella above Bakersfield, CA, water levels at the lake were lowered as a precaution; the safety measure is a temporary fix—engineers say the dam will have to be rebuilt at an estimated cost of at least $500 million.

The disaster at Oroville already is forcing state officials to rethink their long-term plans for water infrastructure projects. Before the drought ended, California had filed requests for federal funding of nearly $100 billion in water infrastructure projects, but most of these involved expanding the state’s system of reservoirs and dams, including a mega-project to raise the Folsom Dam north of Sacramento. In the wake of the Oroville spill, maintenance and repair projects may gain priority over new public works, officials say.

We’ve been reporting in this space for several years that the American Society of Civil Engineers estimates that well over $2 trillion in repairs are needed on America’s infrastructure by the end of this decade if the U.S. is to maintain its ability to compete as an industrial power. Whenever we’ve reiterated this dire warning, we’ve usually put it terms of roads and bridges to get your attention, since we all drive over those structures every day.

If you don’t want to think about bridges on your drive home from work this evening, here’s another factoid to consider when you’re motoring across the river: there are more than 90,000 dams in the United States, and most of them were built before we landed on the Moon.

Whether it’s our bridges or dams that are collapsing, if we don’t fix them soon we’ll all be up the creek without a paddle.