Each year, there are some special mega-projects that represent more than long-term capital investments and thousands of new jobs. These are the projects than can transform the locations that land them, ignite an emerging growth sector or offer the potential to spawn a humongous hub stretching its tentacles from a central facility. 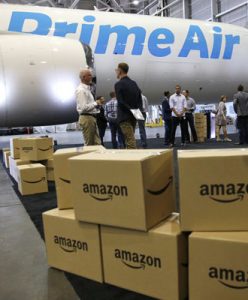 And then there are the game-changers: the projects that can transform an entire industry and impact on the fortunes of a global network of competing players and the locations that host them.

Amazon hit the trifecta earlier this month with its announcement that it plans to build a $1.49-billion air-cargo shipping hub to serve its Prime Air fleet of cargo jets at the Cincinnati/Northern Kentucky International Airport (CVG) in Hebron, KY. Amazon has acquired a 50-year, expandable lease on 900 acres at the airport. The air-cargo hub will create 2,700 new jobs, making Amazon one of the largest employers in the Bluegrass State (10,000 Amazon workers already are employed at fulfillment centers in Central and Northern Kentucky).

Amazon currently delivers its own packages from more than 70 facilities in 21 states (most of which have been built in the past two years). An estimated 44 percent of the U.S. populace is within 20 miles of an Amazon facility, compared with five percent in 2010. But industry analysts report that Amazon’s shipping costs as a percentage of sales have risen every year since 2009; last year, Amazon spent $11.5 billion on shipping, almost 11 percent of its total revenue of $107 billion. According to Citigroup analysts, Amazon could save $1.1 billion annually if it stopped using UPS and FedEx, which on a per-package basis amounts to saving about $3 on the average cost of each of its long-distance package shipments.

Cost-reduction is not the only factor driving Amazon’s pursuit of its own air-cargo wing. The e-commerce leader also wants to offer more delivery options to its customers, including hours not available from the major carriers. Last year, Amazon entered into agreements with two carriers to lease 40 dedicated cargo airplanes to support Prime members with fast, free shipping. Today, 16 of those planes are in service, with more planned for rollout.

Bezos’ grand plan to compete jet-for-jet with UPS and FedEx could prove to be the most challenging hill he’s attempted to climb. UPS and FedEx operate out of 4,000 hubs, shipping 10 million packages a day on more than 1,000 planes and 200,000 vehicles. Analysts report FedEx alone spends more than $5 billion each year on expansion and upgrades.

If Bezos succeeds in making the new Prime Air hub the core of a huge air-cargo carrier network, the project also may result in a dramatic shift in the pecking order of global logistics leaders among locations. The Prime Air hub, combined with the UPS shipping hub just 80 miles southwest at Louisville International Airport, may put the Bluegrass State in the pole position to race to the top of the leaderboard of our global air-cargo logistics ranking.

The top three global air-cargo shipping hubs—Hong Kong, Memphis (home of the FedEx world hub) and Shanghai, respectively—each handled more than 4 million tons of cargo last year. Louisville International, No. 7 in the top 10, shipped about 2.5 million tons. So it’s not unreasonable to anticipate that, when Amazon’s new global shipping hub in Hebron reaches maximum capacity, there could be more air-cargo traffic routing through the northern part of Kentucky than anywhere else on the planet.

And yes, rankings fans, we can see all those hands being raised in the back of the room by people saying, hey wait a minute, your global ranking is per airport and now you’re letting Kentucky’s two hubs ride piggyback?

The biggest ports of entry on the water, like those in Louisiana, Virginia, Los Angeles and NY/NJ are sprawling facilities spread across several zip codes. Perhaps the time has come to apply the same metric to the air-cargo leaderboard. When you’re evaluating the global air-cargo leaders, the 80 miles between Louisville and Hebron can be covered by a bread-crumb on the Mercator projection map. [We’ll pause here to take an urgent phone call from Memphis].

You’ll have to wait for BF’s 2017 Rankings Report (our July/Aug issue) to view any new criteria for air-cargo logistics leaders. [And no, that’s not because FedEx just told us not to expect delivery anytime soon on that extra-large rack we ordered from the Rendevous rib joint across the street from the Peabody Hotel in Elvistown, which always will be our top-ranked global location for the consumption of pig bones.]