By Business Facilities Editorial Staff
From the January/February 2017 Issue

The Tennessee Department of Economic and Community Development is the winner of our Silver Award in BF’s 2016 Economic Development Deal of the Year competition, for General Motors’ $788.7 million expansion of its Spring Hill, TN manufacturing facility. 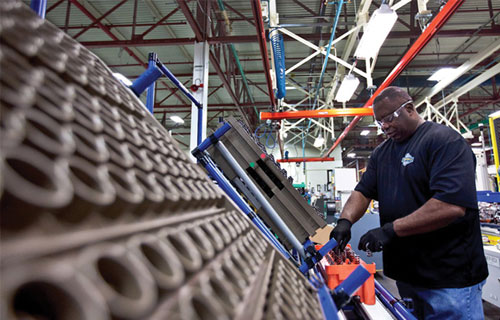 GM will be adding 781 new jobs at its Spring Hill facility for a new high-efficiency engine program and to modernize the vehicle programs at the plant. The project will have an estimated direct economic impact for the region of $3 billion over the next 10 years. In addition to the 781 new workers, the expansion is expected to result in the creation of nearly 6,500 indirect or induced jobs in the region in 10 years, resulting in more than $2 billion in new wages.

“GM’s decision to put a new high-efficiency engine program and modernize vehicle programs at Spring Hill is a strong indicator that Tennessee can compete with anyone as an automotive powerhouse,” BF Editor in Chief Jack Rogers said.

The $788.7-million deal that snared our Silver Award brings GM’s total investment in the Spring Hill plant in 2016 up to more than $936 million including an expansion announced in February. The company has announced investments of over $2 billion for Spring Hill since 2010.

“We want to congratulate GM on another important investment in Spring Hill and its workforce,” Gov. Bill Haslam said, at the announcement of the most recent expansion at Spring Hill. “Tennessee has an incredibly strong business climate, and we continue to attract investment from companies that can choose to do business anywhere in the world. It is important to see long-time partners like GM continue to invest in Tennessee and create high-quality jobs here.”

“This investment will position GM and its workforce as continued leaders in powertrain manufacturing,” said Arvin Jones, GM’s North America Manufacturing Manager. “[This] announcement reinforces our absolute faith in this facility, and our strong commitment to this community and the state of Tennessee.”

The TN DECD credited the Tennessee Valley Authority, Maury County and the City of Spring Hill as key players who helped the state secure the project.

“TVA understands the importance of reliable, affordable electricity to General Motors and the entire automotive industry. We are proud to be a partner in this announcement, which will lead to more jobs and investment in the region’s economy,” TVA President and CEO Bill Johnson said.